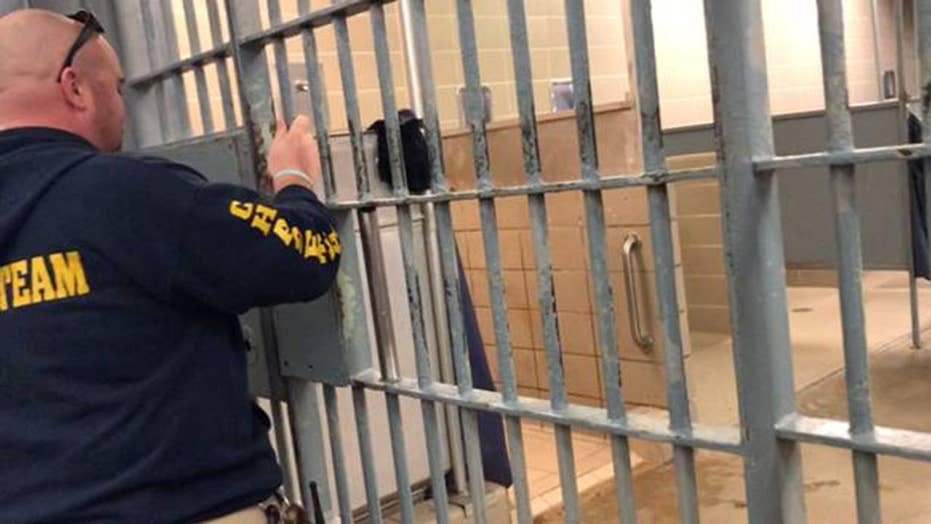 Louisiana is quickly emerging as the go-to spot for migrant detainees. Immigration and customs enforcement teams there are holding one out of every six of the nation’s detainees there as migrants await their fates from immigration judges.

WINNFIELD, La. - Louisiana has become a go-to spot for Immigration and Customs Enforcement to plant detainees in its custody.

The federal agency has signed contracts to convert at least eight former jails or prisons around the state into ICE detention centers within the past year.

Winn Correctional Center is one of them. Embedded within the woods of the small city of Winnfield, the barbed-wire-surrounded former prison has quickly filled up with detainees seeking asylum relief and other migrants whom ICE has in its custody. More than 1,500 reside at Winn. Statewide, ICE said the number is roughly 8,000 detainees out of about 48,000 total who are currently in the agency’s custody. That means one out of every six is currently placed at 11 facilities spread across the gulf state.

Lindsay Williams, ICE Public Affairs Officer, said the expansion is all about where the agency can find much-needed bed space.

“The realistic reason is ICE needs bed space and if there are facilities that are mutable to converting, and they have the staff, and are willing to do it; they need bed space just like Arizona, Texas or any other place,” said Williams.

ICE and LaSalle Corrections, a private company that runs prisons in Louisiana, Texas and Georgia, allowed Fox News into Winn for a tour of the facility. Inside the all-male population, from mostly Asian and Central American countries, detainees were dressed in navy blue uniforms. They walked freely from one location to the next with their hands behind their backs as if they were in handcuffs.

Immigrant detainees at Winn Correctional Center wait to be seen by full-time medical personnel. Their faces are concealed to protect their privacy. (Fox News/Charles Watson)

ICE said the facility allowed four hours of recreation a day. Dozens of detainees played a game of basketball, kicked around a soccer ball or got haircuts in recreational areas. Others formed a prayer circle inside a chapel detainees use for worship. Several more used their free time to earn money working in the cafeteria's kitchen.

“We try to give them a wide variety of activities and recreational opportunities to blow off some steam, stay in shape. It gives them something to do to keep the morale up,” explained Williams."

As officials showed Fox News around, some migrants shouted in foreign languages. However, we were not permitted to engage with any of them as we toured the facility. We requested interviews with more than a dozen people in custody days prior to visiting the facility, but every request was denied “due to the nature of the case before the immigration courts,” according to ICE.

Inside the barred sleeping quarters, Winn’s 1,511 detainees are assigned to more than three dozen tiers that fit up to 44 detainees at a time. With that, the facility can fill roughly 80 extra bed spaces if needed.

A look inside one of more than 30 tiers where ICE detainees sleep at Winn Correctional Center. 44 people sleep in each.  (Fox News/Charles Watson)

ICE pays the Winn Parish Sheriff Department $70 per day for each inmate it houses at Winn.  The contract has been a big economic boost for the struggling parish, which largely depends on lumber and prisons to support its economy. Sheriff Cranford Jordan, who oversees the detention center, said the parish is expecting to see $35 million to $40 million dollars annually from its five-year contract with ICE.

“That’s based on raising the salaries of the employees from $10 an hour to $18.44 an hour,” said Jordan. “They’ll have more disposable income.

Jordan said the detainees are much easier to manage than the state inmates that were there when Winn was a medium-security state prison. Other than a two-day-long hunger strike, he said the atmosphere has been calm there since the detention center was converted in May 2019.

However, some attorneys said there’s room for improvement.

“It’s very difficult for vegetarians because food choice is limited,” said Assma Ali, a Mississippi-based immigration attorney who represents more than a dozen clients at Winn.

“The conditions in the detention center can be better. However, it’s a fairly new center for housing immigration detainees.”

The on-site immigration courts, which is under the jurisdiction of judges in Otero County, New Mexico—for the sake of speed, according to officials at the detention center— is another area of concern. According to Ali, most paroles are denied even for individuals who have family ties and no criminal history. That has led her to worry about her clients’ mental health.

“Judges are, to some extent, nice, but most cases are denied,” she said. “This has caused many of our clients to suffer from some depression.”

In October a Cuban man identified as Roylan Hernandez-Diaz, 43, was found dead in his cell at an ICE detention center in Richwood, La. The preliminary cause of death was ruled as self-inflicted strangulation.

The ACLU of Louisiana said Hernandez-Diaz, who was transferred into ICE custody after being picked up by El Paso border patrol in May, was being held in solitary confinement.

“Roylan Hernandez-Diaz’s death in solitary confinement is a horrific and preventable tragedy that demands a thorough investigation and immediate changes to conditions in ICE facilities,” said Alanah Odoms Hebert, ACLU of Louisiana executive director, in statement.

ICE said the incident is under investigation. It also assured that detainees at Winn had access to a team of full-time nurses and a doctor — despite language barriers — though it couldn’t confirm how many medical personnel were available to the immigration population.