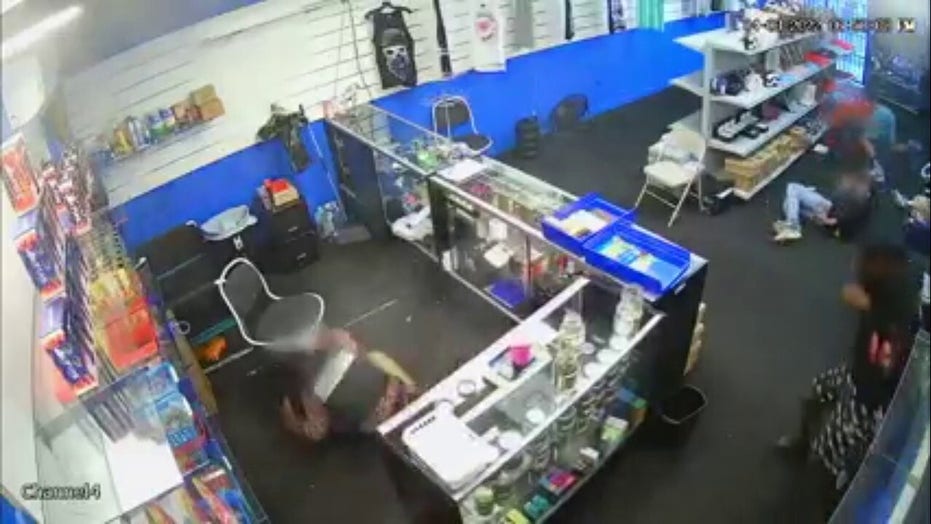 Two suspects are wanted in connection with an armed robbery in a Los Angeles smoke shop that resulted in a shootout between a security guard and four others in which one person was killed, authorities said.

The gunfire broke at the "Smoke Shop" just before 7 p.m. in Compton, the Los Angeles Sheriff's Department said. Four people entered the store and pointed handguns at an employee behind a counter.

An employee appears to be wearing a ballistic vest with "SECURITY" written on it, according to security footage released by authorities Wednesday. One suspect can be seen taking out a gun and pointing it at him.

Four suspects got into a shootout with a smoke shop employee in Compton, California during an armed robbery. One suspect later died, authorities said. (Los Angeles County Sheriff's Department)

The employee pulls out a gun and a gun battle ensued. The suspects trip over each other as they try to flee and fire several rounds at the store employee.

He was shot in the neck and face but was later released from the hospital.

A half-hour after the gunfire exchange, deputies responded to Martin Luther King Hospital for a gunshot victim. Investigators said the victim was one of the four suspects at the smoke shop who had been wounded.

The sheriff's department told Fox News that suspect later died. A second suspect was arrested the following day on April 4.

Kahlel Lundy, 23, and Keith Rachel, 21, were identified as the other two participants in the robbery and are wanted for murder, authorities said.