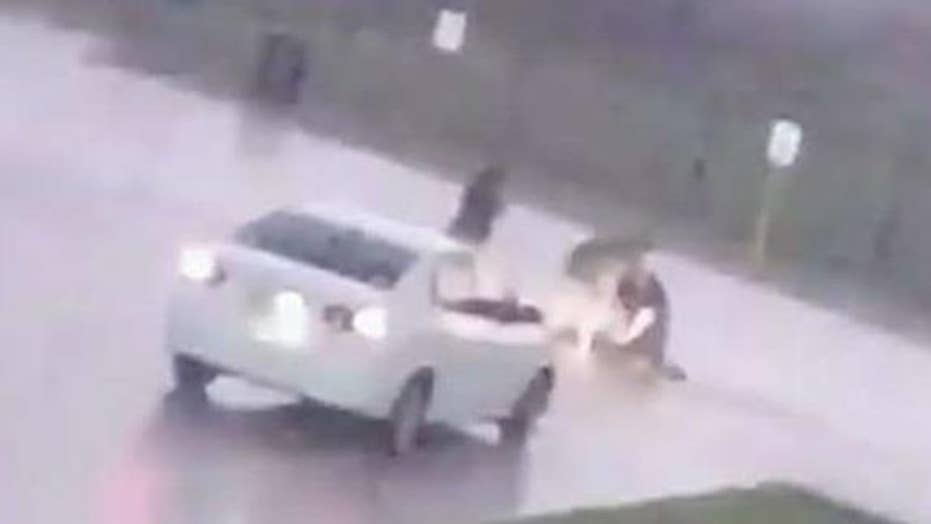 Two good Samaritans performed CPR on a man struck by lightning until more help arrived. The man was airlifted to a hospital where he is recovering with serious injuries.

A man in Texas walking his dogs who was struck by lightning Thursday sustained "very serious injuries," but is going to survive, thanks to the efforts of some good Samaritans who rushed in to help.

Alex Coreas was walking his three dogs out of the Meyer Park Dog Park in Spring, Texas,  just north of Houston when he was hit by lightning.

"His shoes and his socks got blown off his feet," Christy Mittler, a clinic worker at the Stuebner Airline Veterinary Hospital, told KTRK-TV.

Another bystander who was nearby, Corey Hart, told Storyful he was waiting to pick up his daughter from the veterinary clinic when he heard the "incredibly loud sound" of the lightning strike and saw Coreas lying on the ground in the rain.

“The whole front of his shirt was burned,” Hart told Storyful.

Hart flagged down Bill Williams, a technician at the animal hospital, who started performing CPR on Coreas with help from Mittler. Eventually, the group was able to get a pulse and Coreas was breathing again as the ambulance arrived on the scene.

"We rolled him over. We were knocking him on his back, telling him, 'It's OK. You got hit by lightning,'" Mittler told KTRK.

Coreas was airlifted to Memorial Hermann hospital, where he was recovering.

"His clothes caught on fire from the lightning strike, his shoes were knocked off, and he fell forward to the ground," family members said in a GoFundMe page to help pay for his medical expenses.

Authorities said the man's three dogs ran away after being frightened by the lightning strike but were later found.

The lightning strike left a "gaping hole" in the concrete where Coreas was walking with his dogs at the time, according to KRTK.

While Coreas survived being struck, others have not been so lucky. So far this year there have been 19 lightning fatalities in the U.S., according to the National Weather Service.