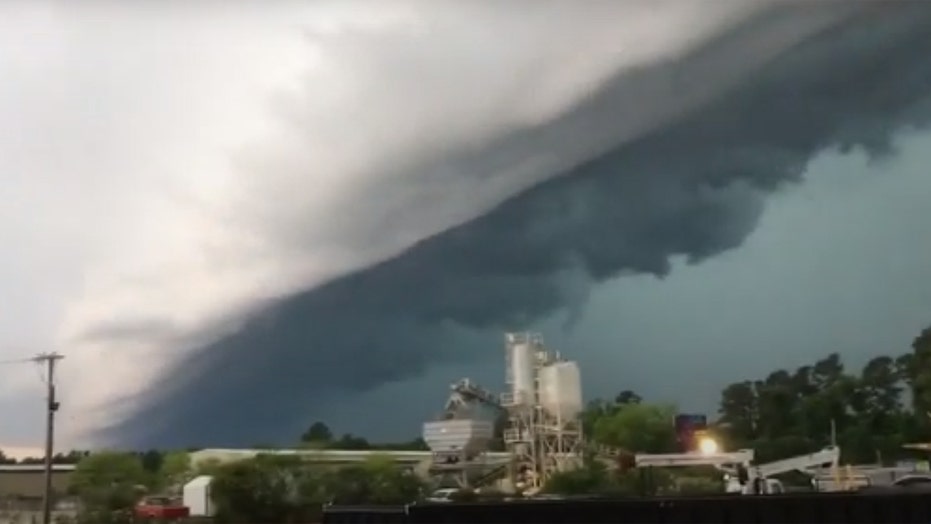 One person was killed and several homes caught fire after a series of severe thunderstorms roared through the Carolinas Tuesday, bringing gusty winds, large hail and powerful lightning.

The National Weather Service (NWS) issued a severe thunderstorm watch until 11 p.m. on Tuesday for central and northern South Carolina and much of North Carolina, including Ashville, Charlotte, Raleigh and Fayetteville.

As the powerful storms moved through the area, tennis-ball-sized hail was reported near Bethune, South Carolina, and a tornado warning was issued in Chester County near Heath Springs.

Officials in Chester County said one person died after being struck by lightning as the storms moved through.

One person was killed in a lightning struck and damage was reported after severe thunderstorms bore down on Chester County, S.C. on Tuesday. (Richburg Fire-Rescue)

Officials told WBTV-TV that the person who was struck was taken to the hospital, but pronounced dead by 9 p.m.

In addition to the lightning strike, fire officials said they were busy with medical calls, cutting trees out of the roads, responding to accidents and dealing with downed power lines and trees on houses.

Other lightning strikes also were blamed for several house fires in the region.

In Greenville, a large fire at a home under recent renovations was reported in the Roper Mountain Road area.

A home in South Carolina was destroyed after it caught fire following a lightning strike on Tuesday. (FOX Carolina)

The West Hampton Fire Department told FOX Carolina that the cause of the fire was most likely lightning. No one was home at the time of the blaze, but the building was considered a total loss.

In North Carolina, another home under construction in Fort Mill caught fire after it was struck by lightning when severe weather hit the region. Neighbors told FOX46 that sparks were coming from the roof around 6:40 p.m. Tuesday around the time of a lightning strike.

Authorities were able to get that blaze under control minutes after arriving. While neighbors told FOX46 they believe the blaze was sparked by lightning, the fire marshal said the cause is still under investigation

An earlier round of severe thunderstorms in South Carolina was blamed for another set of house fires in the eastern part of the state.

Storm clouds loom over an industrial area in Conway, South Carolina, on Tuesday as lightning flashes in the distance as severe thunderstorms impacted the state. (Blake Flowers via Storyful)

The storms brought dark shelf clouds, gusty winds, hail and lighting to several cities in the state during the early-morning hours on Tuesday.

The West Florence Fire Department said on Facebook that firefighters responded around 6:15 a.m. to a house on fire after it was struck by lightning. Firefighters were able to contain the blaze to the attic, with minor damage to bedrooms.

"The occupants were alerted by working smoke detectors, which allowed them to exit the house safely," assistant chief Dustin Fails said.

Firefighters saw flames coming from the roof and were able to get the blaze under control in 25 minutes. No injures were reported.

Calmer conditions were forecast across the region Wednesday as a cold front pushes through the area, with winds gusting up to 30 mph with temperatures running five to 15 degrees below normal over the next five days, according to the NWS.