Jeffrey Epstein was reportedly found injured in a New York City jail cell on Tuesday after a possible suicide attempt.

Epstein, 66, was discovered at the Metropolitan Correctional Center nearly unconscious and with wounds to his neck, law enforcement sources told the New York Post.

Initial reports indicated the wealthy financier was transported to a nearby hospital, but Politico reported late Thursday morning that Epstein was not moved to a hospital and remained at the correctional center.

It was not immediately clear how Epstein incurred his injuries, but sources told the news outlet Epstein might have intentionally harmed himself in a bid to get transferred from the jail. Epstein also might have been attacked by an inmate at the facility in downtown Manhattan, according to the report.

Epstein — whose powerful friends over the years have included President Trump, former President Bill Clinton and Prince Andrew — was arrested on July 6 on sex trafficking charges. He pleaded not guilty to accusations he ran a trafficking operation involving underage girls.

Epstein allegedly created and maintained a "vast network" and operation from 2002 "up to and including" 2005, enabling him to "sexually exploit and abuse dozens of underage girls" in addition to paying victims to recruit other underage girls.

Per prosecutors, he "worked and conspired with others, including employees and associates" who helped facilitate his conduct by contacting victims and scheduling their sexual encounters.

The politically-connected millionaire was denied bail, which a judge said was because of Epstein's overseas connections and extraordinary wealth. His lawyers publicly filed a notice on Tuesday appealing the judge's decision to keep him jailed until trial.

Judge Richard Berman said Epstein is a danger to the community and a flight risk, and added the main reason was the danger his freedom would pose to past victims and potential future ones. 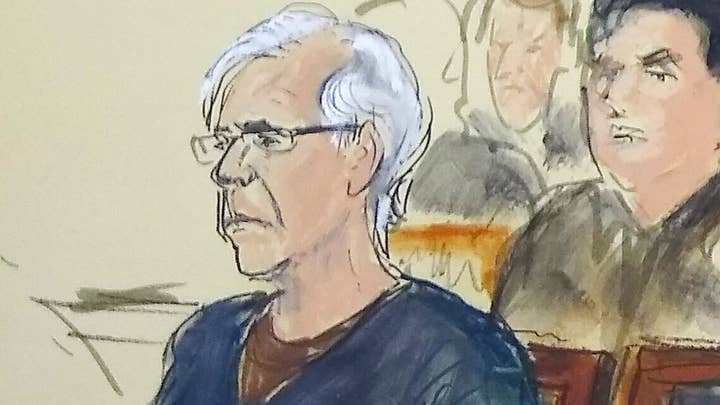 Lawyers for Epstein say he has stayed clean since pleading guilty to soliciting a minor for prostitution charges in Florida in 2008 and is being unfairly targeted.

Epstein avoided a potentially long sentence more than a decade ago with 13 months in jail following a plea deal with former U.S. Attorney Alexander Acosta and could face up to 45 years in prison if convicted.