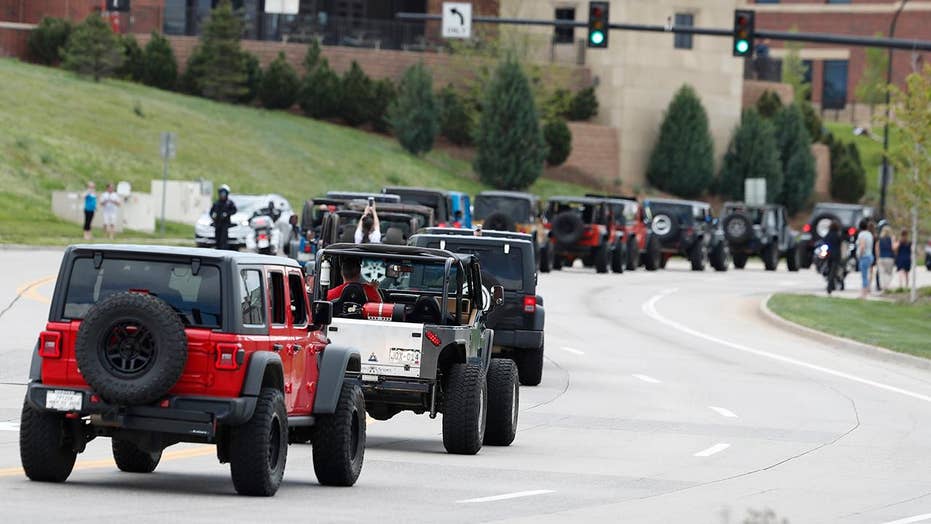 A procession of Jeeps waits outside the funeral of 18-year-old Kendrick Castillo, who was killed while protecting his classmates from a school shooter.

A fleet of Jeeps encircled a Colorado church on Wednesday to honor Kendrick Castillo, an 18-year-old senior at the STEM School Highlands Ranch who was fatally shot when he tried to apprehend a gunman in his class.

More than 600 Jeeps lead a caravan to the memorial service for Kendrick Castillo, who was killed in the assault on the STEM  School Highlands Ranch on Wednesday. (AP Photo/David Zalubowski)

More than 600 Jeeps form a caravan to the memorial. (AP Photo/David Zalubowski)

An Instagram post by the Colorado Jeep Girls urged the community to join in the procession to celebrate Castillo's love for the military-style vehicles.

"Please join us in whatever Jeep you drive. New, old and everything in between! Let’s show Kendrick’s family the love from our Jeep community to them," the post said.

More than 600 Jeeps showed up in all.

Castillo was fatally shot on May 7 as he lunged at a man who reportedly brandished a gun in class and told everyone not to move before opening fire. Castillo was joined by three other students who jumped on the alleged gunman and allowed the rest of the class to flee the room. He was killed just two days before his last day of high school.

"Kendrick Castillo died a legend. He died a trooper," said Brendan Bialy, one of the students who also jumped the man. "I know he will be with me for the rest of my life."

Nine students were shot before two suspects were taken into custody, officials said. The pair had a "number of weapons," which included two handguns, according to Douglas County Sheriff Tony Spurlock.