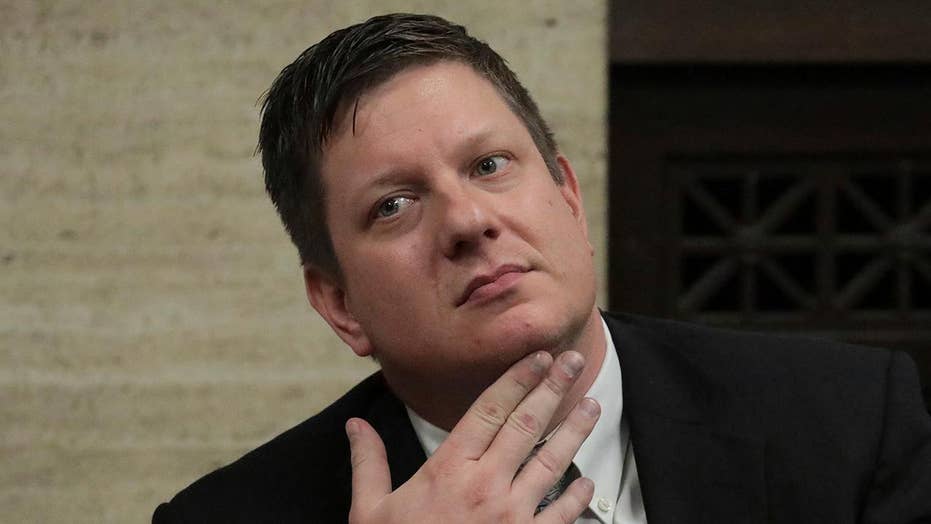 He faces at least 10 years in prison.

After the verdict was read, Van Dyke’s wife, Tiffany, wept silently. His father stood solemnly by as Van Dyke was taken away in handcuffs. McDonald’s great-uncle, the Rev. Marvin Hunter, was also seated in the courtroom. He, too, cried.

Outside the Leighton Criminal Courthouse, protestors gathered cheered and clapped when the verdict was read. Some chanted “Justice has won,” others, “Justice for Laquan!” One woman shouted, “Thank you, Jesus!”

Meanwhile, a large group of protestors walked town Madison Street chanting “who’s street, our street” and carrying Black Lives Matter signs. Another group made their way toward city hall. At times, they chanted “We made history!” and “16 shots and a cover up.”

Ahead of the verdict, Judge Vincent Gaughan warned people in the courtroom to contain their outbursts, adding, “If you do act out, I will have you arrested.”

“Look into your heart and control your emotions,” he said. “This will not be easy for anyone on either side.”

McDonald was shot 16 times in 2014. The shooting was captured on police dash camera video and sparked years of racial tension in the Illinois city. The trial has polarized Chicago and garnered national attention over how to police minority communities.

Van Dyke was charged with first-degree murder, 16 counts of aggravated battery and one count of official misconduct in McDonald’s death. The judge also told jurors they could consider second-degree murder.

Prosecutors argued that the veteran police officer lied multiple times about the threat he claims McDonald posed and said a dashcam video proved it.

“You’ve seen it on video,” prosecutor Jody Gleason said. “He made it up.”

Van Dyke’s attorneys painted McDonald as a dangerous teen who refused to drop a three-inch retractable knife he'd been carrying the night he was killed.

Defense attorney Daniel Herbert told jurors McDonald was an “out-of-control individual who didn’t care about anyone,” and argued that his client was a “scared police officer who was fearful of his life and the life of others.”

In a risky legal move, Van Dyke took the stand in his own defense and testified that McDonald was a threat from the moment he saw him.

“His eyes were bugged out – just expressionless, and he turned his torso toward me,” Van Dyke told jurors during his 90-minute testimony.

FLYER SAYS IF CHICAGO EX-COP VAN DYKE IS ACQUITTED, 'THE CITY MUST STOP'

Van Dyke joined the Chicago police force in June 2001 at the age of 23. He told jurors about his early assignments as a beat cop and testified he never fired his weapon before the night he shot McDonald.

Van Dyke said he and his partner, Officer Joseph Walsh, noticed McDonald walking down the street with a knife in his hand. Van Dyke said he thought McDonald dropped his knife and was “greatly relieved.”

But then things escalated quickly, he told jurors, asserting that McDonald was “advancing on me.”

“His face had no expression, his eyes were bugging out of his head. He had these huge white eyes just staring at me,” Van Dyke said, adding that McDonald was about 10 to 15 feet away by this point.

Van Dyke claimed McDonald waved the knife toward Van Dyke’s shoulder. It was then that the officer opened fire.

Pushing back, prosecutors challenged his account of McDonald raising a knife before being shot.

“You’ve sat here for several days. Where do you see it on the video?” Gleason asked Van Dyke. When he replied that the video didn’t show his perspective, Gleason showed Van Dyke an animation created by his own defense team. Van Dyke said he didn’t see his perspective on that model either, however.

The defense also called a pharmacology expert who claimed McDonald was “whacked on this PCP.” James O’Donnell testified that McDonald was more vulnerable to hallucinations because he didn’t take his prescribed medication – an antipsychotic and a mood stabilizer.

CHICAGO'S CHILDREN CAUGHT IN THE CROSSFIRE: ALARMING NUMBER OF MINORS SHOT OR KILLED IN VIOLENCE-PLAGUED CITY

Van Dyke claimed he shot McDonald 16 times when the teen swung a knife at him. Grainy dash cam video — released 13 months later after a court order — showed McDonald holding a knife at the side of his body, about 15 feet away from VanDyke, and walking away from him and other officers who'd responded to a report that the youth was trying to break into vehicles. McDonald fell to the pavement less than two seconds after he was shot. Van Dyke continued shooting for another 12 seconds, emptying his 16-shot semiautomatic gun.

Prosecutors, who rested their case Sept. 20, called the 2014 killing “completely unnecessary” and argued that race had been a factor in the brutal incident. They claimed that on the night McDonald was shot and killed, the only thing VanDyke saw was a “black boy walking down the street” who had the “audacity to ignore the police.”

Eury Patrick, the prosecution’s expert on deadly use of force by the police, testified that Van Dyke kept shooting “long beyond the point of being reasonable.”

“They’re not trained to just empty their gun,” Patrick said. “It’s not a knee-jerk reaction. They’re trained to shoot until the risk is ended.”

Chicago Mayor Rahm Emanuel’s team of city attorneys fought against the release of the video for more than a year until a judge in 2015 ordered it to be made public. Many activists and community leaders accused Emanuel of trying to cover-up the incident, putting the already fragile relationship between the mayor and community into disrepair.

The investigation, one of the largest in the nation, was prompted by the Van Dyke dash-cam video.

The report slammed the city and police for insufficient training and a failure to hold power-hungry officers accountable.