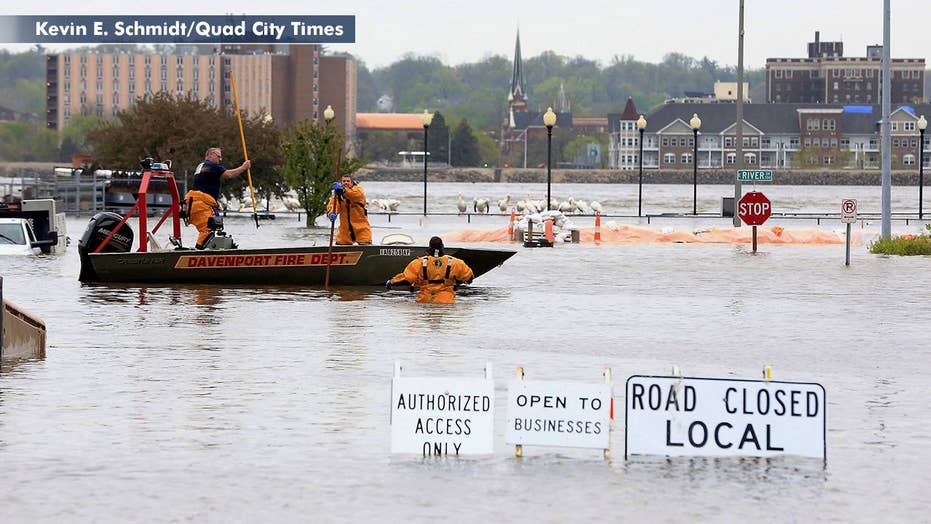 DAVENPORT, Iowa – Scott Ryder said this city’s fire chief came by his business, Exit Realty, on Tuesday and told him the temporary levee protecting the city was at risk.

Within an hour, his offices in the Bucktown neighborhood were flooded. No one was injured, but neighboring businesses also flooded. Some people needed rescue and about a dozen cars were up to the windows in floodwater.

There was not enough time to move them.

Davenport does not have a flood wall. What it has is a few hundred yards of a riverfront park. The river needs to reach 16 feet to flood the park, 18 feet to close the road, beyond that, the city needs to put in HESCO barriers to keep water out of the businesses close to the Mississippi. HESCO barriers are pretty much just fencing, with a liner so they can be filled with dirt or sand.

In the past, they have held when the river reached 21 feet. Now they were tested with flooding at 22 feet. They have been tested for more than a month. On Thursday afternoon, officials announced the river level in Davenport was at 22.64 feet, just above the previous record 22.63-foot mark reached on July 9, 1993.

“Obviously, this road, the sewer systems have all been underwater for upwards of 48 days. And we have just not had anything like this happen ever before,” said Davenport Public Works Director Nicole Gleason.

The combination of rain softening the sand in the barriers and constant pressure from the floodwater was too much. The temporary levee failed and a swollen Mississippi river rushed through.

Soaked in contaminated water, the riverside businesses are closed. The river is supposed to crest on Thursday, but with more rain in the forecast, Davenport’s mayor cannot predict when businesses may be able to open or when they can attempt to shore up the temporary levee.

“We gotta wait for that to recede so we can actually come in and make some long-term changes,” said Mayor Frank Klipsch.

The problems for the Midwest started with the bomb cyclone in March that overloaded the Mississippi and Missouri river basins with meltwater.

Then, the rain did not let up. Flooding all across the heartland has been devastating and the damage to homes, farms and businesses widespread.

“This is the second rise this year. So far, within the last six weeks, I have been affected at my other shop…and in the spring, that’s a lot of revenue,” said John Bloch, who operates a marine services shop in St. Joseph Missouri.

The flooding has also made travel a nightmare. The number of roads damaged or flooded out is too high to get an accurate count. Those who venture out in their cars say it’s like driving through a maze.

“So many streets are closed. So, I’m like, I gotta turn around. Now, I’ll go this way,” said Beth O’Neill of Orland Park, Ill.

Aggravating as that may be, that’s what police want drivers to do when they arrive at flood waters on the roadways. A driver has no way to see how deep it will get or if the road under the flood has been washed out.

Sgt. Bill Lowe with the Missouri State Highway Patrol said it only takes 2 feet of water to sweep a car away.

With flood warnings and a flash flood watch in effect for much of the heartland, there is no good news on the horizon. Rain is expected to keep coming, with a break on Saturday.

Then, more rain, adding to the already swollen rivers next week.