Several people can be seen walking near the King Road home where four University of Idaho students were killed in their sleep on Nov. 13.

MOSCOW, Idaho – Several people can be seen walking in the background of police bodycam video taken near the King Road home where four University of Idaho students were killed in their sleep on Nov. 13 and around the same time.

Plainclothes officers made an unrelated stop of three University of Idaho students for suspected underage drinking at about 2:50 a.m. Nov. 13 as they were walking across a field off Taylor Avenue in between the Sigma Chi frat house and the girls’ rental home.

The group was stopped about one-tenth of a mile from the off-campus rental, where Madison Mogen, 21, her best friend Kaylee Goncalves, 21, Ethan Chapin, 20, and his girlfriend Xana Kernodle, 20, were brutally stabbed to death between 3 a.m. and 4 a.m.

The three women lived together, and Chapin, who lived about 200 yards away at Sigma Chi, was staying over.

Screengrab from police video, zoomed in and highlighted. (Moscow Police)

Police have previously said investigators found nothing of evidentiary value in the bodycam videos – but it remains unclear whether they have identified or interviewed the people walking. Fox News Digital asked about the images on multiple occasions beginning Saturday and has not yet received a response.

Online sleuths spotted the group of figures, who can be seen walking near the intersection of King Road and Taylor Avenue, two houses down from the crime scene.

Olivia Vitale, a true crime vlogger with more than a million followers on TikTok, went viral Saturday with the details. She said she believes someone walking with the group may have information that could help investigators.

"During the timeframe of the murders, there were people in the general vicinity," she told Fox News Digital.

"Between the people with law enforcement and the people in the background of the body cam footage, that is about half a dozen people. The importance is they may have witnessed something unbeknownst to them"

The bodycam is stamped 3:12 a.m. Police have previously maintained that they believe the murders took place between 3 and 4 that morning.

A view of Taylor Avenue, which intersects with the King Road street two doors down from the scene of a quadruple homicide just steps off the University of Idaho campus. (Michael Ruiz/Fox News Digital)

Police have previously asked the public to avoid speculation and misinformation and warned that people who harass or threaten "potentially involved parties" could face criminal consequences.

However the development has the potential to help investigators in the case, according to experts.

"If they haven’t yet, they need to locate them ASAP," Pat Diaz, a former Miami-Dade homicide detective turned private investigator, told Fox News Digital. "That is a great lead. Someone knows something." 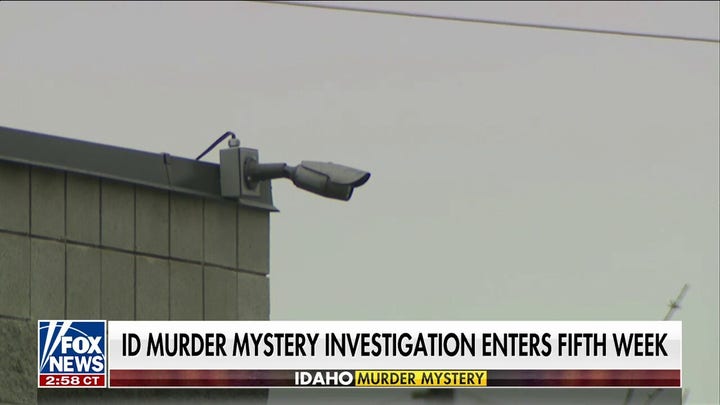 With the FBI’s assistance in the case, and the known presence of the two plainclothes officers, investigators can narrow down cell tower data to reveal which phones were in the area at the same time, according to Joseph Giacalone, a professor at the John Jay College of Criminal Justice and a retired NYPD sergeant.

"They can see what phone numbers are attached to a specific cell site," he told Fox News Digital.

"Since we know there are two cops standing there who probably have cell phones, they can narrow down other people within that general vicinity."

The technology requires a subpoena or a search warrant.

Aerial map showing the location of the Nov. 13 Idaho murders and the unrelated stop nearby for underage drinking that same morning. (Google )

Fox News Digital has also asked police whether any search warrants have been served outside the of King Road house and whether authorities have zeroed-in on any unnamed persons of interest.

"That is not information that is being released at this time," Robbie Johnson, a spokeswoman for the investigation, said Saturday. Separately, she said that certain details were being kept confidential to preserve the integrity of the investigation.

In a video statement Monday, Moscow Police Capt. Roger Lanier said investigators were combing through "hours and hours and hours" of video in the case.

IDAHO MURDERS: POLICE SAY THEY'RE GETTING ‘GOOD TIPS’ 4 WEEKS IN DESPITE LACK OF REWARD AND SUSPECT

The belongings of the victims of the Univeristy of Idaho quadruple homicide are removed from the house in Moscow, Idaho, Wednesday, December 7, 2022. (Derek Shook for Fox News Digital)

"Those videos are from all over town gas stations and specifically the area around King Road," he said. "It does take a lot of time."

He said investigators have conducted interviews and re-interviewed some parties as they continue to process new tips.

"We have literally an army of analysts who have been sorting through videos that have been submitted through the FBI.gov Moscow upload site," he said.

As police continue the hunt for a suspect, they are urging students and local residents to exercise caution.

"We should be vigilant now, but we should make that a way of life for us," Lanier said. "We should always be walking with our head up, sticking to lighted paths and walking in groups if we can – and in addition, letting people know when you've arrived home, if you have not made prior arrangements."

Last week, police asked the public for help finding the occupant or occupants of a white 2011 to 2013 Hyundai Elantra also seen near the victims' home around the time of the slayings.

The tip line can be reached at 208-883-7180 or by email to tipline@ci.moscow.id.us. Digital Media can be submitted at fbi.gov/moscowidaho.

As Fox News Digital reported early Monday, Goncalves' family is also raising funds to offer a reward for information that cracks the case.