A slow-moving Hurricane Sally is edging closer to the northern Gulf Coast Tuesday as forecasters are warning of potentially historic flooding to the region.

The U.S. National Hurricane Center (NHC) in Miami said as of early Tuesday, Hurricane Sally is a Category 1 storm, packing maximum sustained winds of 85 mph, and is located about 105 miles south-southeast of Biloxi, Miss., moving west-northwest at 2 mph.

"Historic flooding is possible from Sally with extreme life-threatening flash flooding likely through Wednesday along portions of the northern Gulf Coast," the NHC said.

Sally is forecast to make landfall sometime between Tuesday night and Wednesday morning, but we may not see a landfall for many hours as the system hovers offshore.

Hurricane Sally lurks off the Gulf Coast in the morning on Sept. 15, 2020. (NOAA/GOES-East)

Some additional strengthening is possible, but at this point it doesn’t matter what category Sally is because the slow movement of this storm will be the biggest danger with a prolonged water event.

A hurricane warning stretches from the Mississippi/Louisiana border to Navarre, Fla., while a storm surge warning is in effect from the mouth of the Mississippi River to the Okaloosa/Walton county line in Florida.

There is also the risk for tornadoes as the system moves onshore, particularly to the east of the center.


The tornado threat from Hurricane Sally east of the center of the storm. (Fox News)

Flood watches are up throughout the region in advance of the storm. (Fox News)

Residents along the northern Gulf Coast need to pay very close attention to the forecast and know what to do if and when flooding occurs.

MISSISSIPPI GOVERNOR WARNS COASTAL RESIDENTS OF HURRICANE SALLY: 'THE TIME TO GET OUT IS NOW'

The storm's shift to the east with a possible landfall in the Biloxi-Mobile region is still not changing the impacts across southern Louisiana.

The location of Hurricane Sally as of Tuesday morning. (Fox News)

A storm surge in the area is still the greatest concern, with 6 to 9 feet expected in areas such as New Orleans. The Big Easy will be spared the worst of the rainfall, wind and surge as Lake Pontchartrain is expecting between 3 and 5 feet.

Levees and flood systems across the region will get a prolonged test of their post-Katrina reinforcements.

Heavy rain from Sally will then spread inland into the Southeast through Wednesday night, with the possibility of inland flooding.

Even as Sally remains out over the Gulf of Mexico, coastal areas are already being impacted.

Photos from Monday showed flooding along Bienville Boulevard in Dauphin Island, Ala.

Some vehicles ran into trouble with high water in the area, which WKRG-TV reported typically floods when a storm approaches the area.

Water levels were also rising in St. Bernard Parish in Louisiana on Monday as the storm neared.

The parish, which had previously declared a state of emergency, set up pumps in the area to prepare for the hurricane’s arrival.

President Trump has issued emergency declarations for parts of Louisiana, Mississippi and Alabama on Monday and on Twitter urged residents to listen to state and local leaders.

Waters from the Gulf of Mexico poor onto a local road, Monday, Sept. 14, 2020, in Waveland, Miss. (AP Photo/Gerald Herbrt)

Alabama Gov. Kay Ivey sought the presidential declaration after the National Weather Service (NWS) in Mobile warned of the increasing likelihood of “dangerous and potentially historic flooding,” with waters rising as much as 9 feet above ground in parts of the Mobile metro area. 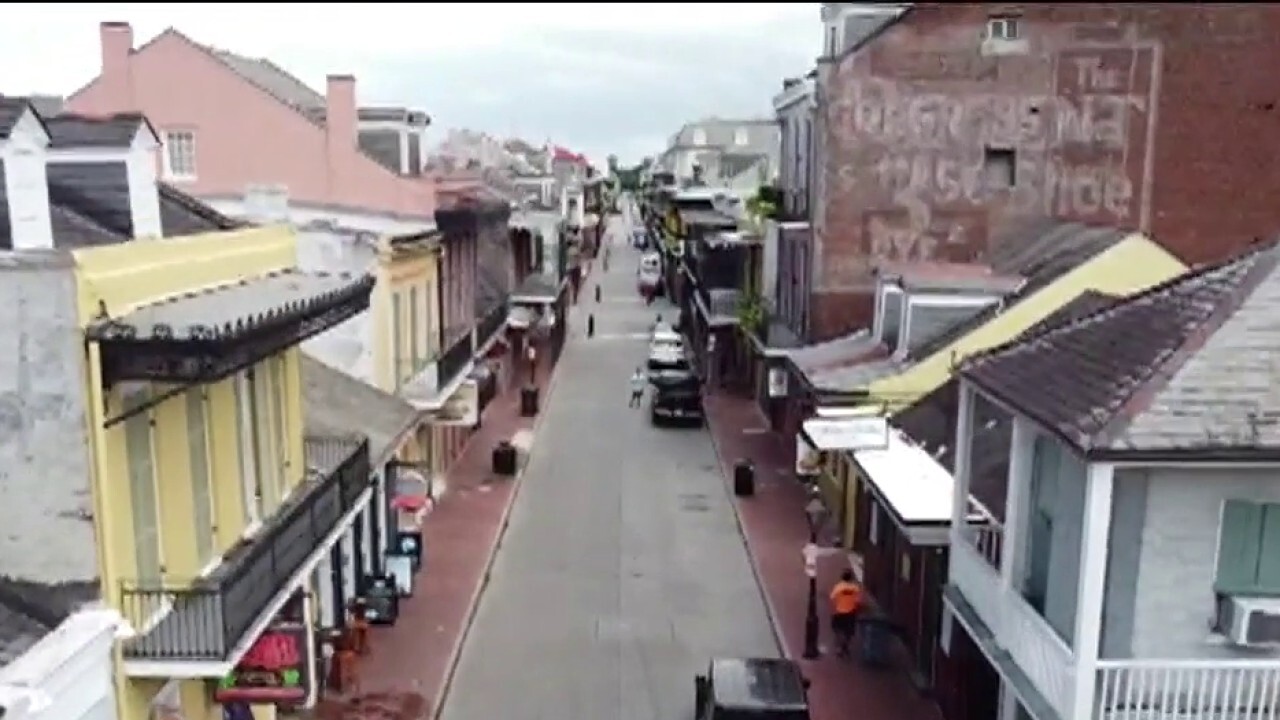 Coastal casinos were also shut down Monday under orders from the Mississippi Gaming Commission.

Elsewhere in the Atlantic basin, this extremely busy hurricane season shows no signs of slowing down.

A strengthening Hurricane Paulette is moving northward away from Bermuda as the final advisory has been issued on Rene.

A look at all the tropical activity in the Atlantic basin. (NOAA/GOES-East)

Tropical Storm Teddy is forecast to strengthen into a major hurricane later this week as it moves northward into the Central Atlantic. Tropical Storm Vicky is near the Cabo Verde Islands but will be short-lived.

Forecast tracks of all of the current storms in the Atlantic basin. (Fox News)

Other than Sally, none of the current systems pose a threat to the U.S.