Residents along the Gulf Coast are under hurricane and tropical storm warnings on Monday as a "rapidly" strengthening Hurricane Sally takes aim at the region.

The U.S. National Hurricane Center (NHC) in Miami said midday Monday that hurricane hunters have found that Sally has "rapidly strengthened" to a hurricane.

Sally is located about 125 miles east-southeast of the mouth of Mississippi River, moving west-northwest at 7 mph with maximum sustained winds of 90 mph. The storm underwent a 20 mph increase in windspeed from an 11 a.m. to noon advisory.

Sally will make landfall Monday night into the overnight hours as a hurricane somewhere in southeast Louisiana. A hurricane warning is in effect from Morgan City, La., to the Alabama and Florida border as well as Lake Pontchartrain and Lake Maurepas, including metropolitan New Orleans.

The current forecast by the NHC shows the storm will be a Category 2 hurricane by the time it makes landfall early Tuesday. Regardless of how strong it gets the impact will be the same, with the biggest risk being the water.

Tropical storm warnings are in effect from the Alabama/Florida border to Indian Pass, Fla. and from the Intracoastal City, La. to the west of Morgan City, La.

Some areas are expected to receive 10 to 20 inches of rain through Wednesday night, as the system is going to be very slow-moving.

Water from the storm that is about to inundate the region will test the levee system in New Orleans. A storm surge of up to 11 feet is possible in some areas.

Other hazards with Sally will be high surf, tropical-storm-force winds, and tornadoes, especially on the eastern side of Sally's center, wherever it comes onshore.

Flood watches are in place in advance of Sally. (Fox News)

Outer bands from Sally are expected to bring several inches of rain along the Florida peninsula on Monday, and a tornado threat is possible through Monday afternoon over coastal areas of the Florida Panhandle, Mississippi, Alabama and extreme southeastern Louisiana, according to the NHC.

Significant flash and urban flooding are likely, as well as widespread minor to moderate flooding on some rivers as the storm slowly moves north after landfall.

Rainfall forecast from Sally, which is forecast to bring impacts throughout the Gulf Coast and Southeast.

Heavy rain is also expected to spread across eastern Tennessee, northern Georgia and western North Carolina from Thursday into Friday.

As yet another hurricane takes aim at the Gulf Coast during a busy 2020 Atlantic hurricane season, officials in Louisiana were urging residents to prepare. 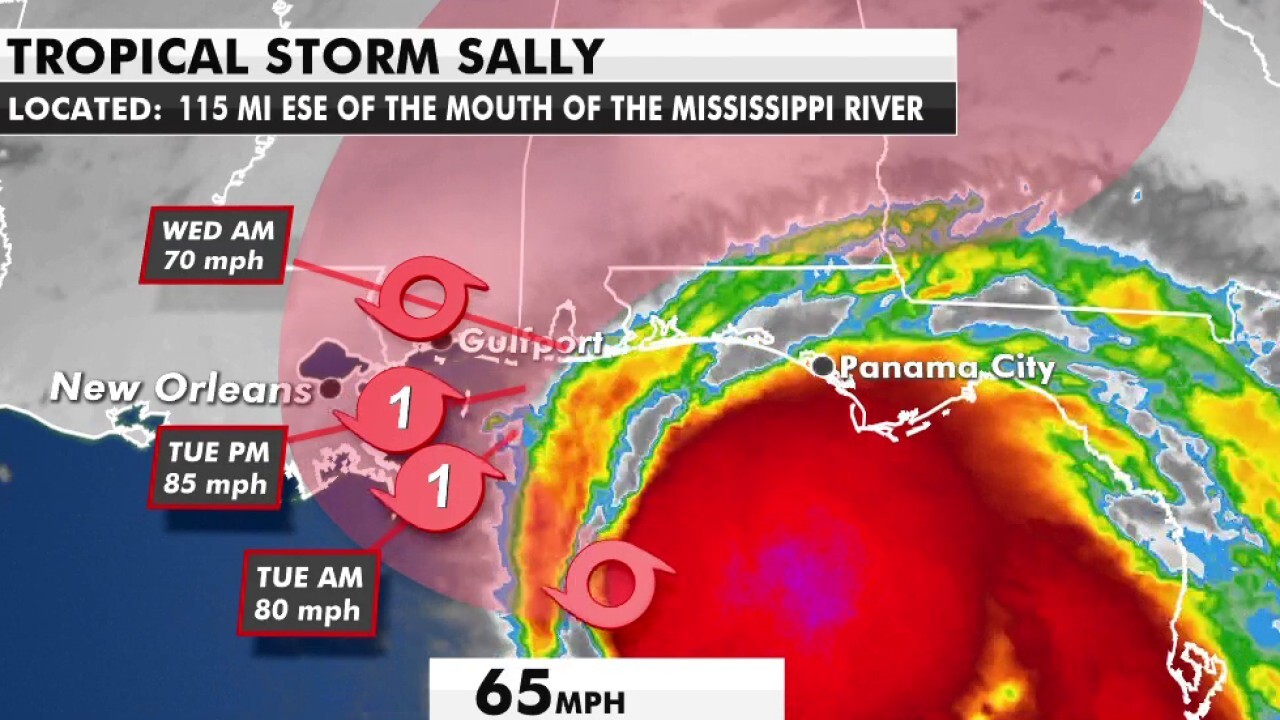 “We have every reason to believe that this storm represents a very significant threat to the people of southeast Louisiana,” Bel Edwards said at a news conference.

A mandatory evacuation has already been issued in Grand Isle, La., ahead of the storm. On Saturday, New Orleans Mayor LaToya Cantrell issued a mandatory evacuation order for Orleans Parish residents living outside of the parish’s levee protection system. Homeland Security Director Collin Arnold said the evacuation is mandatory because residents in those areas will have their evacuation routes cut off as flood gates close.

"Nine feet of storm surge triggers the Highway 90 and Highway 11 flood walls to be closed," he said at a news conference.

A mandatory evacuation was also in effect in St. Charles Parish.

“This is a storm everyone needs to take seriously," St. Charles Parish President Matthew Jewell said Sunday. "We are likely to see tropical-storm-force and hurricane-strength winds for longer than Hurricane Katrina, a storm surge of 4-7 feet and the possibility of 20 inches of rain."

In Mississippi, a mandatory evacuation went into effect in Hancock County beginning at 7 a.m. on Monday for residents in all low-lying areas, residents living on rivers, river inlets, bayous, creeks, and in travel trailers. The order also covered modular homes, mobile homes, homes under construction and partially constructed homes.

Residents were out Sunday stocking up on supplies and preparing for what could be long-term disruptions.

Mississippi officials warned that the storm was expected to coincide with high tide, leading to significant storm surge.

“It needs to be understood by all of our friends in the coastal region and in south Mississippi that if you live in low-lying areas, the time to get out is early tomorrow morning,” Gov. Tate Reeves said late Sunday.

Gulfport resident Al Ward told WLOX-TV he was getting stocked up on propane for what could be a lot of outdoor cooking.

“Right now, I’m doing what everybody else that has any sense would do,” Ward told the television station. “I’m being prepared for the worst and hoping it will be as it has been earlier this year. We dodged the bullet.”

All northern Gulf Coast states are urging residents to prepare.

“It is likely that this storm system will be impacting Alabama’s Gulf Coast. While it is currently not being predicted as a direct hit to our coastal areas, we know well that we should not take the threat lightly,” said Alabama Gov. Kay Ivey. She urged residents to prepare and stay informed of the storm’s path.

In addition to Sally, there are four three other named systems churning in the Atlantic Ocean currently.

Hurricane Paulette is impacting Bermuda on Monday. Once a tropical storm, Rene will dissipate on Monday. with no threat to land.

Yet another disturbance off the coast of Africa, Tropical Storm Vicky, also formed Monday in the eastern portion of the Atlantic Ocean.