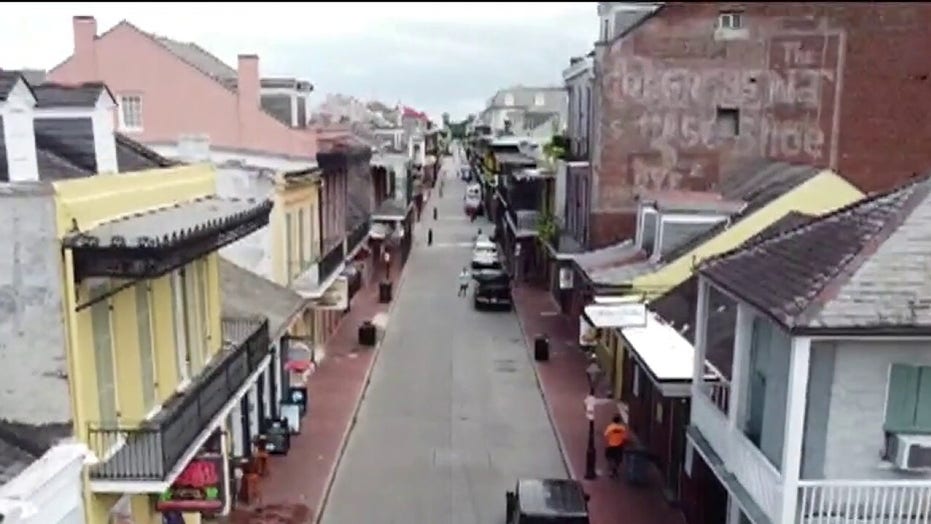 President Trump said he is monitoring Hurricane Sally as the storm inched toward the northern Gulf Coast early Tuesday, which could bring deadly storm surges, flash floods and the possibility of tornadoes for the region.

As of 2 a.m., Sally was located about 75 miles east-southeast of the mouth of the Mississippi River and was moving west at 3 mph. It weakened slightly over the past few hours, and now has maximum sustained winds of 90 mph, down from 110 mph on Monday, according to the NHC.

"We are fully engaged with State & Local Leaders to assist the great people of Alabama, Louisiana, and Mississippi. Be ready and listen to State and Local Leaders!" Trump tweeted.

The center of Sally will move near the coast of southeastern Louisiana before it makes landfall in the hurricane warning area tonight or Wednesday morning.

Alabama Gov. Kay Ivey sought the presidential declaration after the National Weather Service in Mobile, Alabama, warned of the increasing likelihood of "dangerous and potentially historic flooding," with waters rising as much as 9 feet above ground in parts of the Mobile metro area.

"Some re-strengthening is forecast early to occur later today, and Sally is expected to be a dangerous hurricane when it moves onshore," the National Hurricane Center (NHC) in Miami said in its 2 a.m. advisory.

MISSISSIPPI GOVERNOR WARNS COASTAL RESIDENTS OF HURRICANE SALLY: 'THE TIME TO GET OUT IS NOW'

Waters from the Gulf of Mexico poor onto a local road, Monday, Sept. 14, 2020, in Waveland, Miss. (AP Photo/Gerald Herbrt)

Sally achieved hurricane strength Monday and quickly intensified to a Category 2 storm with 100 mph winds. By early Tuesday morning, the storm's maximum sustained winds had decreased to 90 mph, making it a Category 1 storm. Forecasters said some restrengthening is expected to occur late Tuesday.

An extremely dangerous and "life-threatening" storm surge is expected for areas outside southeastern Louisiana, the NHC said. Dangerous storm surge, rainfall, and wind hazards are expected to extend well away from Sally's center.

The slow-moving storm is expected to produce eight to 16 inches of rainfall with isolated amounts of 24 inches over portions of the central Gulf Coast through the middle of the week. The rain is expected to impact an area from the Florida Panhandle to southeastern Mississippi.

"Life-threatening flash flooding is likely," the NHC said. "In addition, this rainfall will likely lead to widespread minor to isolated major flooding on area rivers."