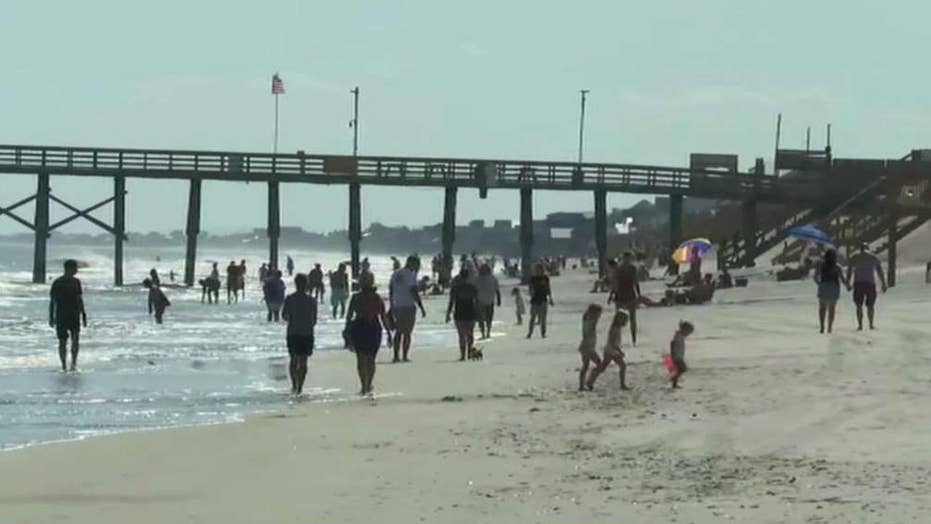 Hurricane Dorian has strengthened back to a Category 2 storm as it moved up the Eastern Seaboard on Saturday en route to Canada after dumping a deluge of rain in North Carolina, forecasters said.

As for 2 p.m. EST, the storm was about 140 miles south-southwest from Halifax, Nova Scotia and traveling at 29 mph with 100 mph winds – which raised it one notch from a Category 1 to a Category 2 storm in just a few hours.

“Satellite wind data indicate that Dorian is stronger than shown in the previous advisory,” the National Hurricane Center said. “Hurricane conditions expected in portions of Nova Scotia this afternoon or this evening.”

STRANDED BAHAMIANS WAIT TO GET OFF ABACA ISLAND: 'ONLY ANIMALS CAN LIVE HERE'

A home on Long Avenue Extension at Grier Swamp was surrounded by water Friday, Sept. 6, 2019. Residents of Horry County breathed a collective sigh of relief today after Hurricane Dorian passed with only minor damages. (The Sun News via AP)

Forecasters said the storm is expected to pass near or over Prince Edward Island late Saturday and then move to Newfoundland and Labrador on Sunday.

Dorian made U.S. landfall Friday morning over North Carolina’s Outer Banks as a far weaker Category 1 storm than the monster storm that devastated the Bahamas earlier this week.

“We just thought it was gonna be a normal blow,” Steve Harris, who lives on Ocracoke Island, said Friday. “But the damage is going to be severe this time. This is flooding of biblical proportions.”

The Ocracoke Volunteer Fire Department makes rounds through the village on Friday, Sept. 6, 2019 on Ocracoke Island, N.C., in the aftermath of Hurricane Dorian. (Connie Leinbach/Ocracoke Observer via AP)

He said he lost his car to the storm and his air conditioning but feels blessed that he lives on the third floor and has insurance.

“It’s just a strange picture,” Harris said. “If you’ve been a regular guest down here for years, you can’t image what we saw.”

Beachgoers looks for shells in the aftermath of Hurricane Dorian in from of The Riggings beachfront condominiums at Kure Beach, N.C., Friday, Sept. 6, 2019. (Robert Willett/The News & Observer via AP)

Officials in North Carolina say search-and-rescue teams are going door to door to check on people who may be injured or in need of assistance after Hurricane Dorian swamped Ocracoke Island with floodwaters.

Gov. Roy Cooper's office said in a news release Saturday that emergency officials have transported fuel trucks, generators, and food and water to Ocracoke, which is accessible only by boat or air.

Connie Leinbach, who publishes the Ocracoke Observer newspaper, told the AP that sheriff’s deputies and other rescue personnel performed at least two rescues from attics.

“We’ve got a ton of water here. It’s more than (Hurricane) Matthew,” she said.

In Virginia, Norfolk was hit with tidal flooding and Cape Henry saw wind gusts on 70 mph, the National Weather Service said. Meanwhile, more than 400,000 people in the region lost power at the height of the storm.

At least four deaths in the Southeast were blamed on Dorian. All were men in Florida or North Carolina who died in falls or by electrocution while trimming trees, putting up storm shutters or otherwise getting ready for the hurricane.

Still, the damage was far less than feared in many parts of the Carolinas, including historic Charleston, South Carolina, which is prone to flooding even from ordinary storms, and Wilmington, North Carolina, the state's biggest coastal city.