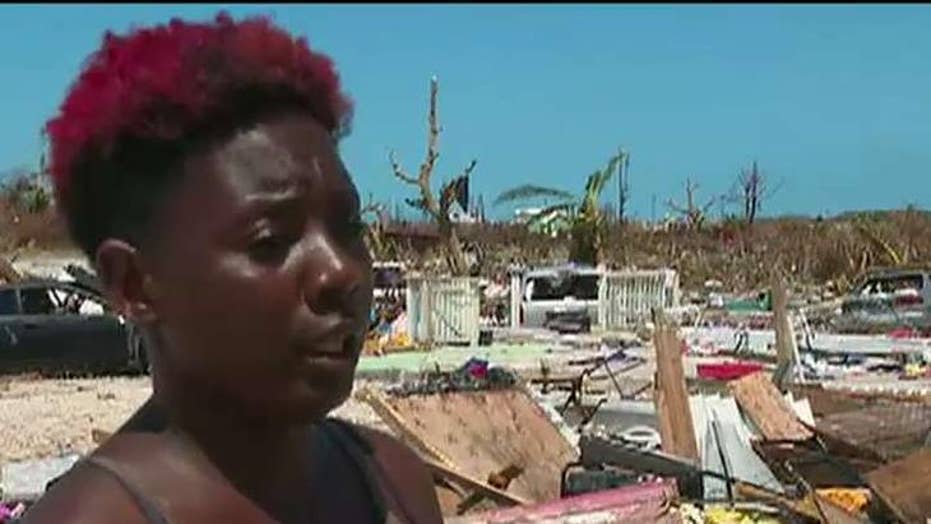 Hundreds of Bahamians affected by Hurricane Dorian headed to the port at Grand Abaco on Friday in desperate hope of getting off the storm-ravaged island as the death toll rose to 43.

The number of dead is expected to continue rising once search teams – delayed by severe flooding – can access devastated areas. Many are stranded on the island as the pace of disaster relief continues to be slow.

Abaco Island is riddled with the bodies of people and animals and it smells of death, Fox News’ Steve Harrigan said Friday.

“Nothing is left here,” he said of the devastation. 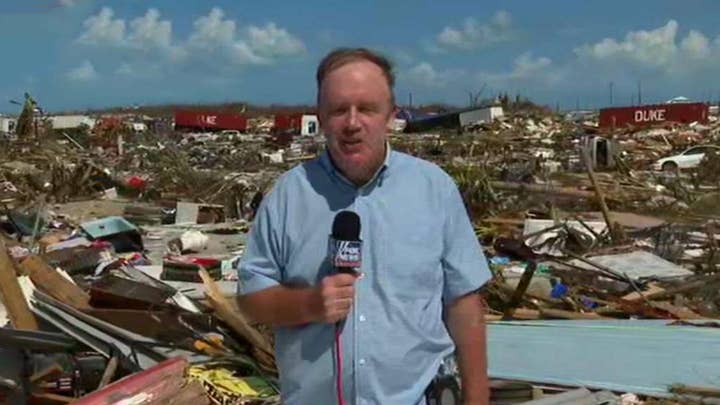 The then-Category 5 hurricane slammed the Bahamas for two days starting last Sunday with 185 mph winds, leveling everything in its path.

Construction worker Gee Rolle waited at the port with his wife in an effort to get to Nassau.

Haitian Burris Filburt, right, and another man stand on the extensive damage and destruction in the aftermath of Hurricane Dorian is seen in The Mudd, Great Abaco, Bahamas, Thursday, Sept. 5, 2019.  (AP)

"It's chaos here," he said. "The government is trying their best, but at the same time, I don't think they're doing a good enough job to evacuate the people. It ain't livable for nobody. Only animals can live here."

"It's chaos here. The government is trying their best, but at the same time, I don't think they're doing a good enough job to evacuate the people. It ain't livable for nobody. Only animals can live here."

"It's going to get crazy soon," said Serge Simon a truck driver waiting with his wife and two sons under 4. “There's no food, no water. There are bodies in the water. People are going to start getting sick."

Prime Minister Hubert Minnis told those gathered at the port to be “patient” and said “everybody is coming.”

As of Friday, the government had not organized any evacuations. A Royal Bahamas Defense Force ship that was picking up employees took an additional 160 people to Nassau and a barge that dropped off port-a-potties took around 300 people.

Destruction caused by Hurricane Dorian is seen from the air, in Marsh Harbor, Abaco Island, Bahamas, Friday, Sept. 6, 2019. The Bahamian health ministry said helicopters and boats are on the way to help people in affected areas, though officials warned of delays because of severe flooding and limited access.  (AP)

Organizations from several countries, including the United Nations, the British Royal Navy, American Airlines and Royal Caribbean and the U.S. Coast Guard, have mobilized to affected areas, bringing food, supplies and other aid.

The Coast Guard says it has rescued 239 people as crews continue searching.

"What we have to do as Bahamians, we have to band together. If your brother needs sugar, you're going to have to give him sugar. If you need cream, they'll have to give you cream," Wellisy Taylor, who was waiting in a line for food and water, said. "That's how I grew up. That's the Bahamas that I know."