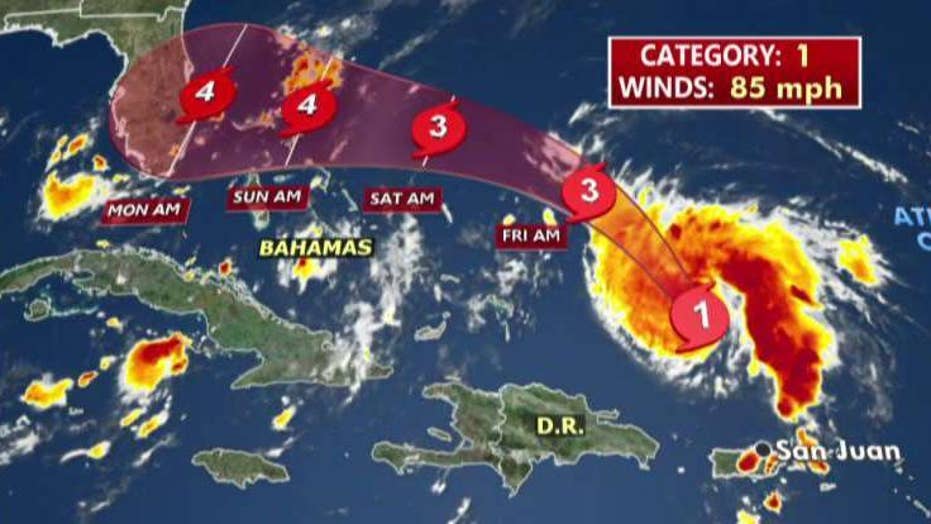 Rick Reichmuth has the latest forecast models from the Fox Extreme Weather Center.

A strengthening Hurricane Dorian is churning over the warm, open waters of the Atlantic on Thursday as forecasts show the storm becoming more dangerous in its path to Florida's east coast — a track that's prompted President Trump to warn Dorian "will be BIG!"

The National Hurricane Center said, as of 11 a.m. ET, that Dorian is a Category 1 storm with sustained winds near 85 mph and it is moving northwest at 13 mph. It was located about 220 miles north-northwest of San Juan, Puerto Rico, NHC said.

Forecasters believe the storm will strengthen into a dangerous Category 3 hurricane by Friday, staying well east of the southern and central Bahamas before making a turn toward Florida by Sunday afternoon.

At that time, the latest NHC forecast is for the storm to be a Category 4 storm as it approaches Florida.

"Hurricane Dorian looks like it will be hitting Florida late Sunday night," Trump tweeted Thursday morning. "Be prepared and please follow State and Federal instructions, it will be a very big Hurricane, perhaps one of the biggest!"

President Trump announced he would not travel to Poland this weekend in order to stay in the U.S. and oversee the hurricane response, saying Vice President Mike Pence would go in his place.

"It's important for me to be here," the president said Thursday at a White House event for the Space Force.

Dorian is still "a long ways away" from eventually hitting the Florida coast, which gives residents across the area "plenty of time" to prepare, according to Fox News meteorologist Adam Klotz.

Hurricane Dorian can be seen in this satellite photo. (NOAA)

"No matter where this ultimately goes, it does look like it’s going to land along the Florida coast but it's running over warm water and it’s going to continue to intensify," Klotz said on "Fox & Friends."

Moving over those warm waters near the Bahamas will allow Dorian to continue to strengthen and, by Friday or Saturday, the storm will be a Category 4 with sustained winds between 130 and 156 mph off the Florida coast. The storm will likely make landfall sometime Monday, Klotz said.

The potential impact of Hurricane Dorian

Category 4 hurricanes bring the possibility of "catastrophic" damage according to the NHC, including residential areas being cut off by trees and power poles that have come down. Those types of storms may also cause months-long power outages.

"So somewhere from Miami, stretching all the way up to Jacksonville, we're going to keep watching this one as it gets closer and closer over the course of this holiday weekend," he said on "Fox & Friends."

The storm was a Category 1 hurricane Wednesday when it swirled through the islands of the northeastern Caribbean, causing power outages and flooding in some areas, but doing no major damage in places such as Puerto Rico.

"Puerto Rico is in great shape with Hurricane Dorian taking a largely different route than anticipated," Trumps said on Twitter Thursday morning. "Thank you to FEMA, first responders, and all, for working so hard & being so well prepared. A great result! The bad news, Florida get ready! Storm is building and will be BIG!"

Dorian caused an islandwide blackout in St. Thomas and St. John in the U.S. Virgin Islands, and scattered power outages in St. Croix, government spokesman Richard Motta said. The storm also downed trees and at least one electric pole in St. Thomas, he said, adding that there were no reports of major flooding.

"We are grateful that it wasn't a stronger storm," he said.

"It's been a long day and a lotta work. Several trees were downed but we dodged a bullet structurally," Wyatt said Wednesday night.

With rising winds and ocean temperatures, Dorian has strengthened to a Category 1 hurricane; Rick Reichmuth reports.

A hotel worker near Point Pleasant Resort told Fox News he spent most of the night "mopping up everything."

There were no reports of serious damage in the British Virgin Islands, where Gov. Augustus Jaspert said crews were already clearing roads and inspecting infrastructure by late Wednesday afternoon.

People in Florida were starting to get ready for a possible Labor Day weekend strike, with county governments along Florida's east-central coast distributing sandbags and many residents rushing to warehouse retailers to load up on water, canned food and emergency supplies.

Gov. Ron DeSantis declared a state of emergency for the entire state of Florida on Thursday afternoon.

"All Floridians on the East Coast should have 7 days of supplies, prepare their homes & follow the track closely," DeSantis said in a tweet on Wednesday when he first declared a state of emergency for the counties that could be in the storm's path.

Now all 67 counties in Florida are under a state of emergency.

South Florida residents were taking no chances, with many heading to stores on Wednesday as they were monitoring the storm's path.

Further north in Brevard County, residents were making sure to get large trees trimmed before Dorian's winds arrive.

"We are concerned about the power lines," Brevard County resident Matthew Wolf told FOX35. "The trees are over the power lines, and we didn't want to lose power or cause an incident where everyone loses power because of us."

James Falvey, the owner of Tree Tech Pros, LLC, said the looming Dorian has made the last couple of days very busy.

"The phone calls are coming in like crazy," he told the television station.