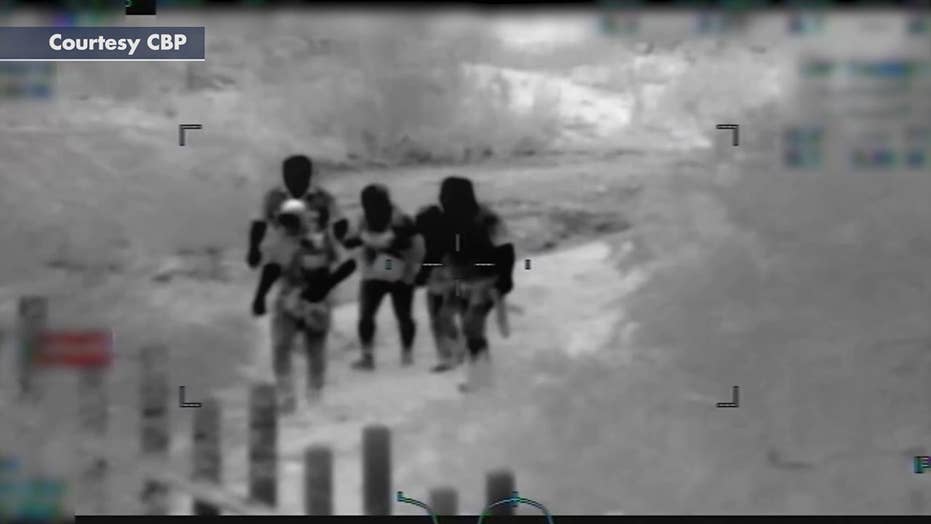 New government video obtained by Fox News shows heavily armed men at the U.S.-Mexico border escorting a migrant mother and son into the United States. Border Patrol officials told Fox News this is an unusual event and express concern that it will become a more regular occurrence – possibly leading to violence.

U.S. Border Patrol surveillance cameras caught the armed smugglers escort the migrant family at 10 p.m. Saturday near the town of Lukeville in the southwest corner of Arizona.

The video shows four to five men in full tactical gear and masks -- carrying long guns and AK-47 assault rifles – escort a Guatemalan woman and her 8-year-old child under a vehicle barrier. The armed escorts turned back across the border. The woman and child turned themselves into border agents, who responded to the incursion.

The area is almost identical to where last week agents apprehended 399 Guatemalan immigrants who arrived in several buses just a 100 yards from the border. The area contains no pedestrian fence and is adjacent to the busy Highway 2 in Sonora, Mexico.

Their nighttime entry under the cover of darkness contrasts with the bold daytime illegal crossings that have become common since migrants realized the U.S. is seemingly powerless to prevent “catch and release.” It also took advantage of forces spread thin along the border due to the surge of Central American unaccompanied children and families. Recently, border patrol cameras have captured video of cartel-operated drones monitoring their movement.

The breach underscores what officials have been telling an indifferent Congress for months about being overwhelmed by the surge of asylum seekers crossing the border.

Border officials said the incident represents how criminal organizations are behind the lucrative surge of Central American immigrants. Guatemalans are paying roughly $7,000 to smugglers for transport from their home to the U.S. border.

“This is highly unusual and highly concerning to the agency,” said a border official who briefed Fox News. “These armed individuals along the border represent an escalation of tactics. This is not mom and dad and kids deciding to head to the border. This is a no kidding, orchestrated effort to bring individuals to the US.  It is not just the numbers. It’s who is running this enterprise.”