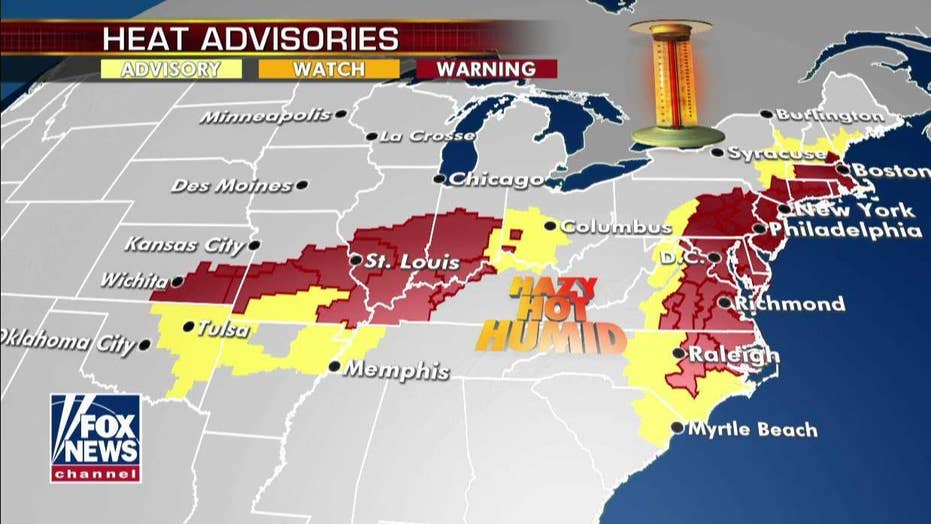 A dangerous heat wave that has seared more than 200 million Americans from the Central U.S. to the East Coast over the weekend is about to come to an end, after being linked to several deaths, and causing roads to buckle and forcing events to be canceled.

The National Weather Service said Sunday the "oppressive and dangerous" heat wave will finally break across the Midwest and Northeast as a cold front passes through the region on Monday and Tuesday, bringing the threat of flash flooding and damaging winds.

"On Sunday, the greatest heat threat will be from the Carolinas to Maine, where daytime highs in the mid to upper 90s combined with high dewpoints will make it feel like its near 100 to 110 for many," the NWS' Weather Prediction Center said. "Even overnight will provide little relief as temperatures struggle to get below the upper 70s or even low 80s."

Excessive heat warnings and heat advisories stretched from Raleigh to Boston and from Kansas eastward to Indiana.

“Heat index is a real thing," Fox News Chief Meteorologist Rick Reichmuth said on "FOX & friends." "It's how our body perceives the temperatures and the ability for our body to cool down. You can't cool down when it's humid because the evaporation doesn't happen off your skin."

In Maryland, health officials said two more people have died in the past week of heat-related illnesses. The man in Prince George's County and woman in Worcester County died in the past week ending Monday, and brought the total amount of deaths tied to hot weather in Maryland this summer is up to four. Heat index values reached over 110 degrees on Saturday, according to the WPC.

"As we approach the hottest time of day, I once again urge Marylanders to be mindful of the impact of this severe weather on their health and wellness," Maryland Gov. Larry Hogan said Friday. "If you haven’t already, please head to air-conditioned spaces as temperatures peak this afternoon."

The sun rises over New York City and the Empire State Building while a man sprays water at Pier A on Saturday, July 20, 2019 in Hoboken, N.J. (AP Photo/Eduardo Munoz Alvarez))

An air conditioning technician was found dead in the attic of a home in Arizona on Thursday, which authorities also suspect may be heat-related. The Avondale Fire Department told FOX10 they have not ruled out other medical conditions that may have contributed to the man's death. Avondale Police will investigate the incident and the Maricopa County Medical Examiner's Office will determine the cause of death.

The heat across South Dakota was so intense in the past week that a portion of Interstate 229 in Sioux Falls was reduced to one lane after the road buckled due to heat on Friday.

The South Dakota Highway Patrol shared photos on Twitter, saying it was under the Western Avenue overpass.

On the East Coast, New York City directed office buildings to set thermostats no lower than 78 degrees through Sunday to reduce strain on its electrical grid. In Philadelphia on Saturday, several hundred people were evacuated from a retirement community because of a partial power outage that officials say may have been heat-related.

In New Jersey, the Oceanic Bridge over the Navesink River was closed Saturday evening after it got stuck open. Monmouth County officials say heat caused expansion of the metal encasing the drawbridge.

But the heat wave was finally starting to break.

Majority of U.S. expected to see temperatures above 90 degrees this weekend.

A Canadian cold front brought a series of thunderstorms Saturday evening across the northern reaches of New England that dropped temperatures across northern Vermont and upstate New York. A heat advisory remains in effect Sunday for southern sections of Vermont, New Hampshire and Maine, where heat indexes could still top 100 degrees.

Storms also knocked out power to hundreds of thousands of residents in Michigan and Wisconsin Saturday, which lasted into Sunday.

Experts have warned residents in affected areas to limit their time outdoors. The risks are greatest for young children, the elderly and the sick.