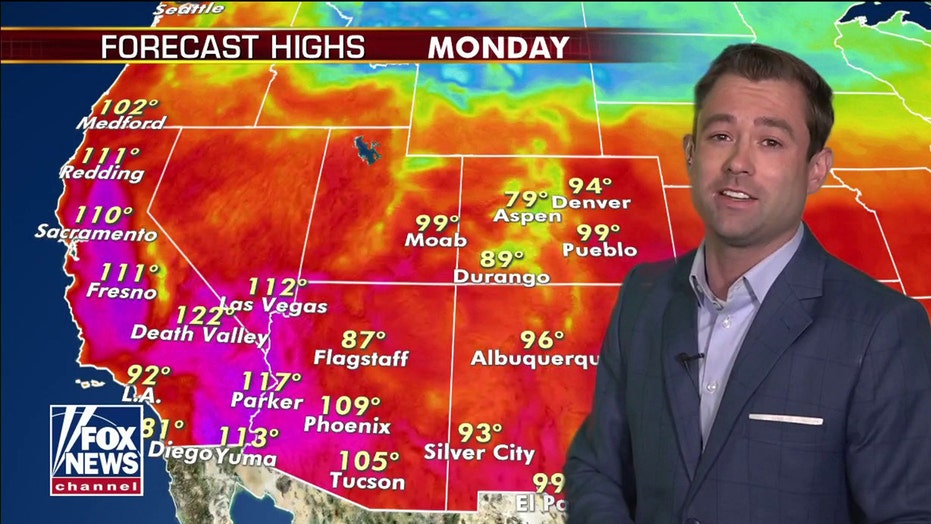 A dangerous heat wave is dragging on across the western U.S. for Labor Day but an abrupt return to winter is in store for the Mountain West.

Excessive heat warnings have been issued for Monday across the Desert Southwest, California and into southern Oregon.

Over 37 million Americans are currently under excessive heat warnings, according to the National Weather Service (NWS).

The heat wave has brought record-setting temperatures to Southern California, where Woodland Hills — a neighborhood in Los Angeles — reached a record high 121 degrees Fahrenheit on Sunday.

The NWS said it was the highest temperature ever recorded in Los Angeles County. The temperature reading rivaled the high in California's Death Valley, typically the hottest place in the country.

Temperatures approaching 110 degrees are expected through much of California on Labor Day.

Excessive heat warnings stretch from the Southwest up through Oregon on Monday.

Temperatures will cool on Tuesday but still remain above seasonal averages.

The combination of high temperatures and dry conditions continue to bing wildfire risk to the western U.S.

Red flag warnings for wildfire danger have been issued across nine western states stretching from Washington to Southern California and east to Colorado.

The wildfire danger expands on Monday across the West. (Fox News)

But across the Mountain West, abnormally hot temperatures are about to give way to winter weather.

Denver is forecast to be in the middle 90s on Labor Day followed by a daytime high in the 30s on Tuesday.

Temperatures will plunge across the Mountain West by Tuesday. (Fox News)

Winter storm watches and warnings are now in place across Montana, Wyoming and Colorado as a winter system will bring in the cold blast.

Winter storm watches and warnings extend across Montana, Wyoming, and Colorado as a winter system will bring in the cold blast.  (Fox News)

Snowfall totals at high elevations will be as much as 2 feet by the time the storm system moves out.