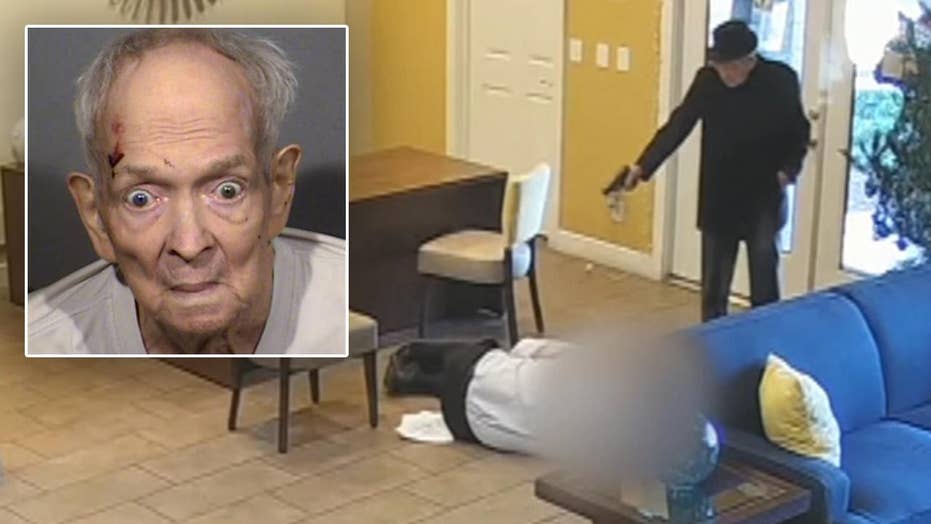 Raw video: Assistant Sheriff Brett Zimmerman briefs the media on incident where 93-year-old Robert Thomas was taken into custody after shooting a maintenance worker at his apartment complex.

Las Vegas Police have released a graphic and startling video showing a 93-year-old man walking into the office of his apartment complex and opening fire, wounding a man.

Robert Thomas, who lives at the Vista Del Valle residences near the Las Vegas strip, is now facing numerous charges, including attempted murder with a deadly weapon, stemming from the incident that unfolded there last Thursday.

Thomas was “upset at the management because of water damage and flooding within his apartment” and fired off three shots inside the complex’s leasing office, two of which struck a victim, according to Assistant Sheriff Brett Zimmerman.

The surveillance footage shows Thomas talking with a man before reaching into his coat pocket and pulling out a Glock 9mm handgun, police said. The man was identified by the Las Vegas Review Journal as a maintenance worker.

A woman at a desk next to the pair called police and told dispatchers that Thomas was “making verbal threats” – which they could hear at the other end of the phone line, Zimmerman said.

At one point, Thomas fired a round through a computer inside the office, police say. The woman then convinced Thomas to let her leave the building, according to Zimmerman.

After the woman stepped outside, police said the surveillance footage showed Thomas firing one shot at the man, who collapsed to the ground writhing in pain.

Thomas later stood over him, extending his arm and firing a second round at him, according to Zimmerman.

Shortly after the last round was fired, officers arrested him.

Zimmerman told reporters Monday that a responding officer fired one shot at Thomas, shattering a glass door. It went through the lapel of Thomas’ jacket without penetrating his skin.

The officer is heard in bodycam footage ordering Thomas to drop his gun, which he did. Thomas, Zimmerman said, cut his head as he was being taken into custody.

The victim suffered multiple gunshot wounds. Both he and Thomas were taken to local hospitals with non-life threatening injuries and were later released.

He is being held Tuesday at the Clark County Detention Center, with his bail set at $25,000.