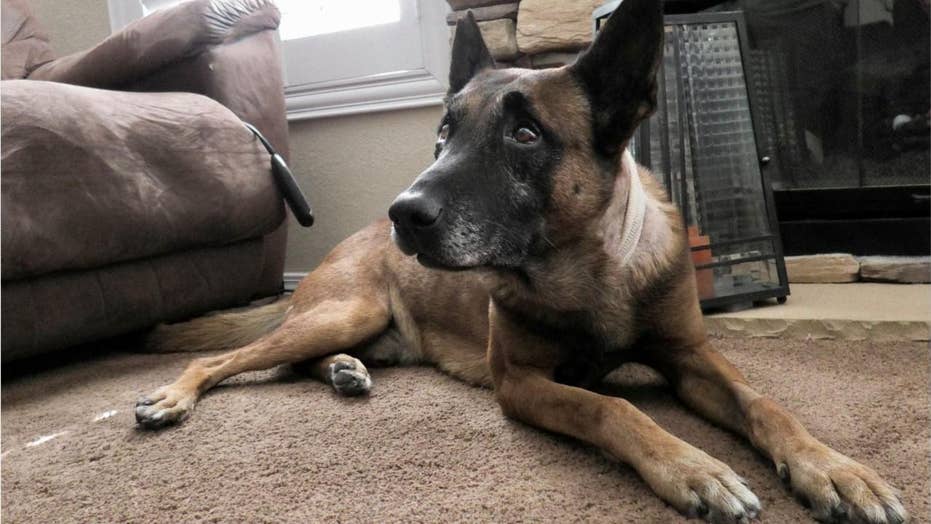 Las Vegas Metro Police Department’s K-9, Hunter, is expected to make a full recovery after the Belgian Malionis was stabbed in the neck during a standoff with a suspect.

A Las Vegas police K-9 was recovering Tuesday after being stabbed by a man who refused to come down from a roof, officials said.

"Hunter," a Belgian Malinois, was stabbed multiple times on Saturday by 27-year-old Joseph Arquilla, investigators said. Arquilla had climbed onto the roof of a business around midnight and wouldn't come down.

Police officers responded to the scene and once Arquilla came down around 4:45 a.m., he allegedly stabbed Hunter repeatedly — until his knife blade broke, KVVU-TV reported.

The K-9 was injured on the left side of his neck, just below his ear, according to photos posted online by the police department. Authorities said he "was lucky that the attacker's blade broke at some point during the assault when it struck the dog's collar, making it harder for the wounds to penetrate deeply."

DOG ALERTS FAMILY TO FIRE, BUT DOESN'T MAKE IT OUT ALIVE: 'HE WAS A PART OF THE FIRE ALAR, HE WAS BARKING'

Hunter — a 7-year veteran of the Las Vegas Metropolitan Police Department — is recovering and "doing extremely well" after the attack, police wrote in a Facebook post Monday.

As of Monday, Hunter was "doing extremely well" during his recovery following the attack. (Las Vegas Metropolitan Police Department)

"Working is the activity that makes him the happiest — and if recovery continues going well, he'll be returning to service in a matter of weeks!" authorities said. "Go Hunter, Go!"

Arquilla was arrested on several charges, including the mistreatment of a police animal and resisting a public officer with a deadly weapon.