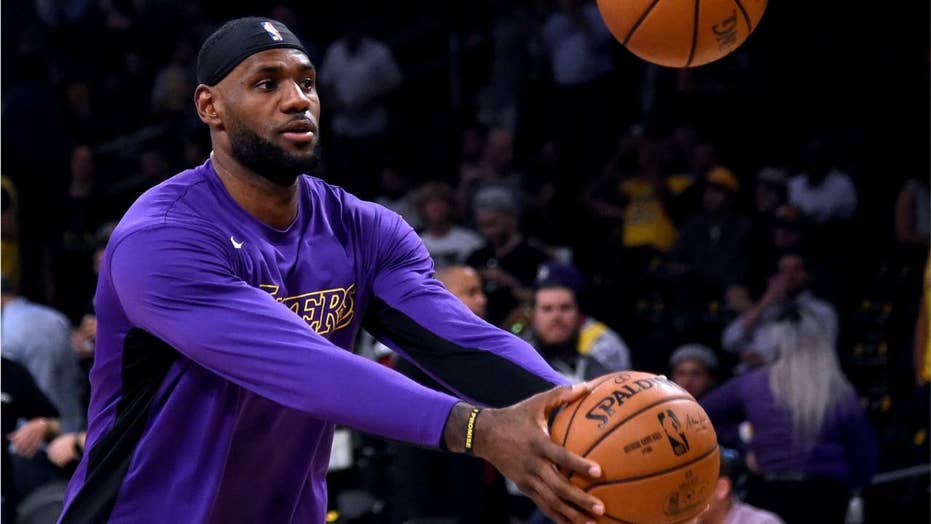 Los Angeles Lakers star, LeBron James, is among thousands of evacuees as a California Wildfire erupts near Getty Center.

Los Angeles Lakers star LeBron James was among the Southern California residents who had to leave their homes as mandatory evacuations were issued early Monday, after a "very dynamic fire" erupted on a hillside near the Getty Center museum, fire officials said.

The Los Angeles Fire Department is urging residents to evacuate neighborhoods on the city's west side., due to the explosive blaze. Los Angeles Mayor Eric Garcetti said at a news briefing he has seen about five burned homes since the Getty Fire began Monday, which he said was not caused by any homeless encampment or by anyone else who is unhoused.

The fire erupted around 1:30 a.m. local time in the Sepulveda Pass along Interstate 405 near the Getty Center Museum community and the hill-top golf community of Mountain Gate,  according to LAFD spokesman Capt. Erik Scott.

Mandatory evacuations were issued after a fire erupted on a hillside near the Getty Center museum in Los Angeles. (KTTV)

By 11 a.m. ET, officials said it had already grown to encompass over 500 acres as more than 470 LAFD firefighters with assistance from neighboring agencies rushed to combat the blaze. Over 10,000 structures, both residential and commercial, were located in the mandatory evacuation zones that include the Mountain Gate, Mandeville Canyon, and Bundy areas in western LA County.

"If you're in the mandatory evacuation zone and you're still there watching this, you're an idiot. Get the hell out," L.A. City Councilman Paul Koretz said at a news conference. "It's way too dangerous."

James, one of the NBA's most prominent athletes, tweeted he had to evacuate from his home after the blaze erupted, calling the fires "no joke."

"Had to emergency evacuate my house and I’ve been driving around with my family trying to get rooms," he said, later sharing they were able to find somewhere to accommodate them."I [pray emoji] for all the families in the area that could be affected by these [fire emojis] now! Pretty please get to safety ASAP."

"My best wishes as well to the first responders right now doing what they do best!" he said in a subsequent tweet.

Flames could be seen on hillsides, with winds fanning the blaze as it grew rapidly. Helicopters were attempting to conduct airdrops, and the flames appeared to be near large homes in the area of the upscale community of Brentwood.

The extent of the Getty Fire can be seen Monday morning. (KTTV)

As daylight broke, airplanes dropping water and fire retardant were able to join the battle against the destructive wildfire. Night-flying helicopters made water drops during predawn hours Monday and large aircraft started flying the area after the sun rose.

One home was seen burning on Chickory Lane in Brentwood in aerial footage from FOX11.

An evacuation warning was issued in the area from Mulholland Drive to the north, Topanga Canyon to the west, Sunset to the south and Mandeville Canyon to the east, and expanded westward to include parts of Topanga State Park and the Pacific Palisades. A full map of the evacuation area was posted on the LAFD's website on the Getty Fire.

Evacuation centers are open in Westwood and Sherman Oaks, and at least 2,600 LADWP customers were without power due to the Getty Fire. The outage was impacting residents in the Bel Air, Westwood and Brentwood neighborhoods.

"Our water and power crews are in the area ensuring adequate water supply and firefighter support and safety near power lines," LADWP said in a tweet.

Videos posted to Twitter by motorists on the 405 showed hillsides engulfed in fire as crews rushed to the scene.

"The 405 freeway a few miles from Santa Monica looks just like a scene in Volcano," another Twitter user wrote.

"There are mandatory evacuations in place and all residents West of the 405 and South of Sunset need to be vigilant and prepared," the LAFD tweeted. Officials later a section of the 405 Freeway as they battled the flames.

Mount Saint Mary's University tweeted its Chalon campus near the Getty had been evacuated under orders from the LAFD. Students were taken to the school's Doheny campus. Evacuations were also ordered for 200 people in a care facility next door, FOX11 reported.

Although the Getty Center is nearby, officials say the facility was built with thick walls and doors that should be able to compartmentalize any flames. The Getty Center said on Twitter a "serious brush fire" was burning in the hills north of the facility.

"Currently the fire is moving west and away from the Getty, and we have activated emergency operations," the museum said, adding that it was preparing to assist emergency responders.

The blaze is moving west, away from the Getty Center, with the greatest threat to the moment in the Mountain Gate and the Mandeville Canyon and Bundy areas in western Los Angeles County, according to Scott. The National Weather Service in Los Angeles said that Santa Ana winds are gusting up to 66 mph over the area that is forecast to decrease by Monday night.

Wind gusts with speeds up to 30 and 40 mph are still being reported across portions of California, which are expected to continue over the course of the next 48 hours, Fox News Meteorologist Adam Klotz said on "Fox & Friends."

"Unfortunately I do think this wildfire story is something we're going to be talking about at least into the middle of this upcoming week," he said.

The blaze in Southern California comes as the Tick Fire near Santa Clarita was 70 percent contained as of Sunday night. Up north, crews are grappling with a wildfire in Sonoma County that officials say covers 85 square miles and caused the evacuation of nearly 200,000 people.

The fire danger in northern and southern California persists through Monday. (Fox News)

Fire conditions statewide made California "a tinderbox," said Jonathan Cox, a spokesman for the California Department of Forestry and Fire Protection. Of the state's 58 counties, 43 were under red flag warnings for high fire danger Sunday, with the threat lasting into Monday.

The communities of Mountain Gate and Mandeville Canyon were ordered to evacuate after the blaze erupted early Monday. (KTTV)

Gov. Gavin Newsom declared a state of emergency Friday in response to the wildfires, which have been powered by gusts reaching more than 102 mph.