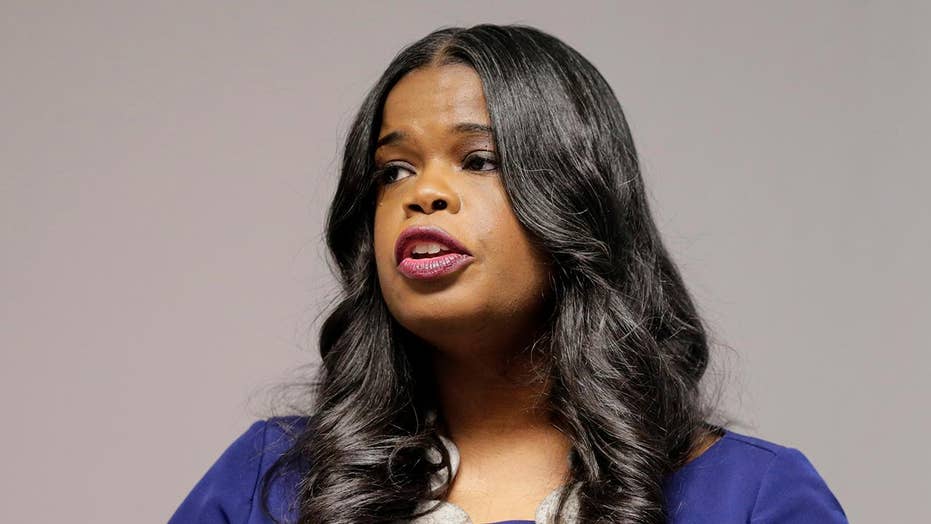 Cook County State’s Attorney Kim Foxx admits she did not formally recuse herself from the Jussie Smollett case, according to her office

The "Empire" star was accused of orchestrating a fake attack in January involving two brothers on a Chicago street. Investigators said they believe Smollett hoped the attention would help advance his career.

Cook County (Ill.) State’s Attorney Kim Foxx's office decided not to prosecute Smollett Tuesday in a stunning reversal after he faced a 16-count indictment for allegedly staging the assault against himself.

Lewis mentioned the envelope Smollett allegedly received before this “whole hoax happened.” Police allege that before the attack, Smollett sent a letter threatening himself to the television studio where "Empire" is shot.

“It (the envelope) supposedly contained white powder. (The) FBI has been looking at that and I think that will be a big deal here in the next few weeks,” Lewis said.

Foxx did not “formally” recuse herself from the Smollett case, her office said in a statement Thursday, explaining that Foxx used the term "recuse" in a "colloquial" sense rather than a legal sense when she left the case last month.

Foxx announced on February 19 she was leaving the case, clarifying later that her decision stemmed from her contact with a relative of Smollett. But Thursday's statement said Foxx's decision was not based "on any actual conflict of interest," implying that Foxx was concerned about the appearance of a conflict.

STATE'S ATTORNEY DID NOT 'FORMALLY' RECUSE HERSELF IN JUSSIE SMOLLETT CASE, HER OFFICE SAYS

“Instead, in an abundance of caution, she informally separated herself from the decision-making over the case and left it to her First Assistant State’s Attorney Joe Magats, a 29-year veteran prosecutor," the statement added. "Although we used the term ‘recuse’ as it relates to State’s Attorney Foxx’s involvement in this matter, it was a colloquial use of the term rather than in its legal sense.”

Lewis said that is “100 percent inconsistent” with what was told to the public initially. “That’s another reason why the FBI will look at this. The process. How did this happen? Who made it happen? And frankly a dismissal like this where we are not even talking about the evidence or a change in circumstances, highly, highly unusual,” Lewis said.

“And frankly from what I have seen so far, there was communication from the Obama people, the former chief of staff, I don’t know exactly how that went down but as soon as that happened we know the case was dismissed. Go figure.”

Fox News obtained an internal email from Foxx's office on Wednesday that asked assistant state's attorneys to dig for any examples to bolster Foxx’s claim that the dropped charges in the Smollett case weren’t as uncommon or shocking as they seemed.

On Thursday, Fox News learned that the City of Chicago delivered a letter to Smollett's legal team, seeking reimbursement for $130,000 in costs related to the investigation. The dropping of all charges against Smollett had prompted backlash from Police Superintendent Eddie Johnson as well as Mayor Rahm Emanuel, who called the decision a “whitewash of justice.”

“Maybe the only time I ever agreed with the mayor of Chicago,” Trump said at the campaign rally in Michigan Thursday.

The Illinois Prosecutors Bar Association issued a critique of Cook County prosecutors on Thursday. The association said Foxx and her representatives "fundamentally misled the public on the law and circumstances surrounding the dismissal."

"The manner in which this case was dismissed was abnormal and unfamiliar to those who practice law in criminal courthouses across the State," the critique said.

The group also highlighted what it called the "uncontested sealing" of the case, saying Cook County prosecutors had "falsely informed the public" that the action was mandatory under Illinois law.

The fact that Tuesday's hearing was not put on the public court schedule and other factors added to an "appearance of impropriety," according to the bar association, which said Cook County prosecutors had "fallen woefully short" of legal ethics.

Foxx reportedly defended her office's decisions to Chicago media outlets. She said even if a trial had been held, Smollett would never have received a prison term because the 16 charges were the lowest form of felony. Foxx also said if Smollett pleaded guilty, it would have been to one count, not 16.

Smollett claimed he was attacked by two masked men who hurled racial and homophobic slurs. The star also said they poured bleach on him and placed a rope around his neck before yelling, “This is MAGA country!”

Though the case was initially opened as a possible hate crime, it quickly unraveled as evidence prompted investigators to suspect that Smollett had staged the attack. Smollett, however, maintains his innocence.