Joe Kennedy joins 'America Reports' with an update on his ongoing legal battle.

Former Washington state high school football coach Joe Kennedy lost his job more than five years ago for silently praying on the field after each game, but his ongoing unemployment and an extended legal battle are not enough to deter the former Marine from his fight for faith.

While coaching at Bremerton High School, Kennedy began kneeling alone in a silent, 15-second prayer at the 50-yard line at the conclusion of every game. He was suspended and later fired in 2015 for refusing to stop the public practice.

"The First Amendment really means a lot to me," Kennedy told "America Reports" on Monday, "and it is really terrible today in America that somebody can be fired just for expressing their faith. So I am just fighting so that no one else ever has to go through this and doesn’t have to choose between their job and their faith." 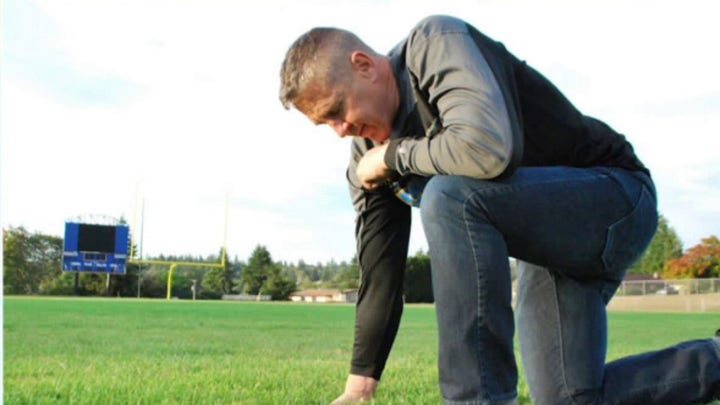 Kennedy's five-year legal battle has had little success in federal court. The Supreme Court also declined to take his case last year, but the self-described "fighter" and his attorney hope to "get him back on the sidelines coaching as soon as possible" with an appeal.

"Every time I took the oath of enlistment it really meant something to me," he told Fox News' Sandra Smith. "Supporting and defending the Constitution, it makes my hair stand up just today even saying it, and I am a fighter. I have always been a fighter.

"That’s why I joined the Marines. I wanted to be a part of that fighting force, and I can also serve here in doing this battle right now. The Marine in me just wanted to fight. It’s a long battle, but I am here for it."

The case is currently under consideration by the U.S. Court of Appeals for the Ninth Circuit.

"If they rule against us," his lawyer told Fox News, "we are prepared to take it to the U.S. Supreme Court if we have to."