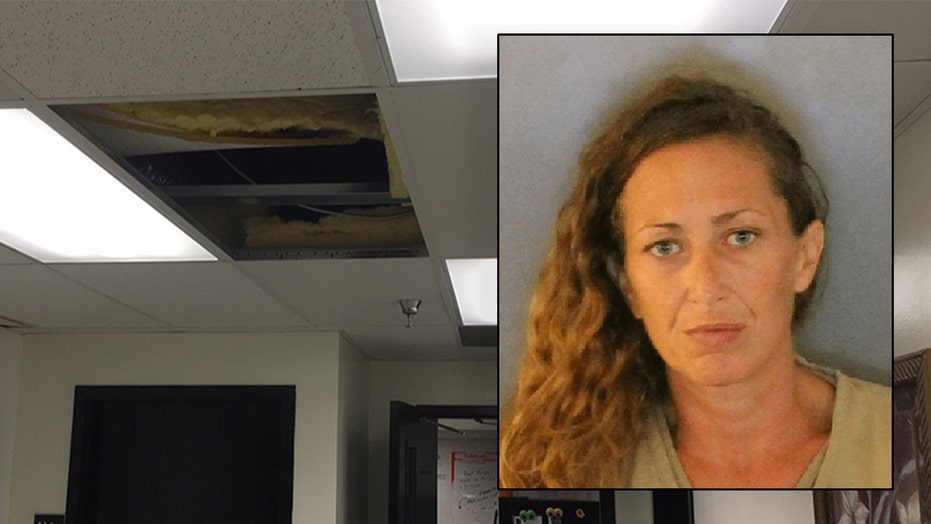 A Florida woman wanted for allegedly shoplifting at a Big Lots store was arrested after trying to make her getaway through a less traditional route: the ceiling.

Kristina Perkins, 37, was in the store, located in Port Charlotte, for several hours on Thursday night before she "entered the women’s restroom with a shopping cart full of merchandise."

The store manager tried to check on Perkins in the bathroom, but noticed "several garbage cans positioned in a manner to barricade the door," the Charlotte County Sheriff's Office said in a news release about the incident.

Perkins was advised that she was caught and police were on the way, but she never left the bathroom. The manager went inside to check on her and noticed "tile missing from the ceiling" and Perkins nowhere in sight.

Eventually, deputies spotted Perkins "several times by removing tiles from various points in the ceiling." She allegedly didn't listen to their commands to stop, and kept crawling through the ceiling.

FLORIDA MAN WANTED FOR ALLEGEDLY POURING BOILING WATER ON BOY, 3, YEAR AFTER BEING ACCUSED OF PUTTING GIRL IN OVEN

The store was evacuated "due to the danger of Perkins falling through the ceiling" as the 37-year-old allegedly led authorities on the odd chase, which lasted for roughly six hours.

As they were trying to capture Perkins, a deputy found her purse, which reportedly had "three syringes and a spoon with white residue that tested positive for Morphine" inside.

Investigators said when a manager told Kristina Perkins police were on the way, she crawled through the Big Lots ceiling for hours. (Charlotte County Sheriff's Office)

Eventually, around 1:40 a.m., Perkins was spotted coming down from the ceiling using a stack of shelves. She was arrested when she made it to the ground.

Big Lots, according to the sheriff's office, suffered "significant damage to their ceiling, duct work and dry wall" and will remain closed until necessary repairs can be made.