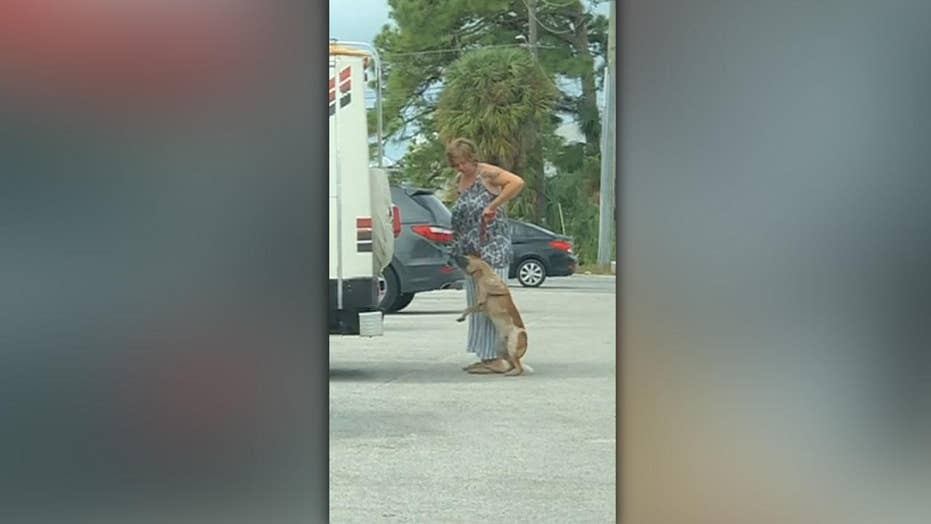 Florida woman arrested for kicking, pulling dog off the ground by leash

Raw video: Tarpon Springs police arrested and charged a 26-year-old woman with felony animal cruelty after a video appeared to show her kicking, choking and pulling her dog by its leash.

A Florida woman who was caught on video choking and kicking her dog has been arrested and her dogs have reportedly been taken away.

Michelle Sieber, 26, was spotted by a bystander on Friday morning walking through a parking lot in Tarpon Springs with her dog, who she allegedly kicked and appeared to choke with its leash.

A bystander, Vincent Minutello, filmed Sieber's actions. In the video he posted to Facebook, he's heard asking her: "Hey, can you be a little bit easier on that dog, please?"

Michelle Sieber, 26, was charged with animal cruelty after she was filmed choking and kicking her dog in a Florida parking lot Friday.  (Pinellas County Sheriff's Office)

To which Sieber replies with a laugh, "You want him?"

"No, but you can't do what you're doing," Minutello tells her. "You're choking him, you're hanging your dog... He's sitting there by his neck and he can't breathe, if you watch him."

Sieber defends her actions and continues to tell Minutello to take him, saying he's up for adoption. Minutello said he reported Sieber to the Tarpon Springs Police Department.

The 26-year-old woman was arrested later Friday for animal cruelty, according to Pinellas County jail records. She's being held on $5,000 bond.

Sieber's dogs — including the one in Minutello's video — were taken into custody by animal control, WTVT reported. Authorities said the dog in the video appears to be OK.