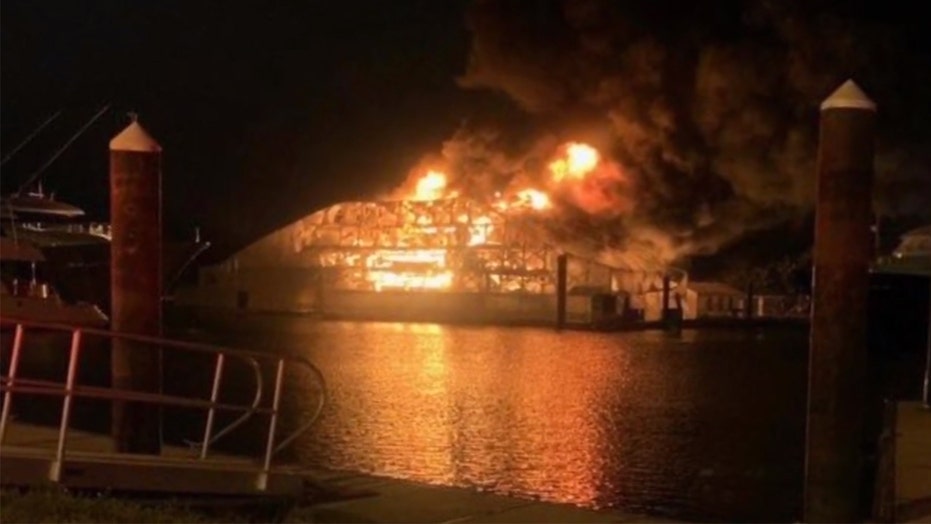 Florida fire officials were investigating after a weekend fire at a marina in Fort Lauderdale destroyed two luxury yachts worth a combined $24 million.

The fire was reported Saturday at 4:30 a.m. on Fort Lauderdale’s Marina Mile, according to reports.

“When I stepped outside, I saw this blazing fire, maybe 12 stories high,” Arlene Meyer told Fox 7 Miami. Meyer said the fire woke her up.

The Fort Lauderdale Fire Rescue released video of the massive fire that 60 firefighters and three fireboats battled for five hours. Wind spread the fire to one yacht to another, local media reported.

“At this time, the fire is under investigation, however it is believed to have started on the 160-foot yacht and then spread to the neighboring 100-foot yacht,” the department said on Facebook.

One woman said the flames from the yacht fire reached 12-stories in the air. (Fort Lauderdale Fire Rescue)

The paper said no one was aboard the two yachts at the time of the fire.

Gollan said Lohengrin was worth $12 to $16 million; Reflections was worth $8 million.

The yachts were next to each other at the marina for repainting, according to the paper.

Reflections owner Chip McElroy, of Tulsa, Okla., told the paper the yacht was named Reflections “for all the blessings in our lives.”

“We were a week away from being out of here,” he said.

Lohengrin's owner purchased the yacht in January, the paper reported.