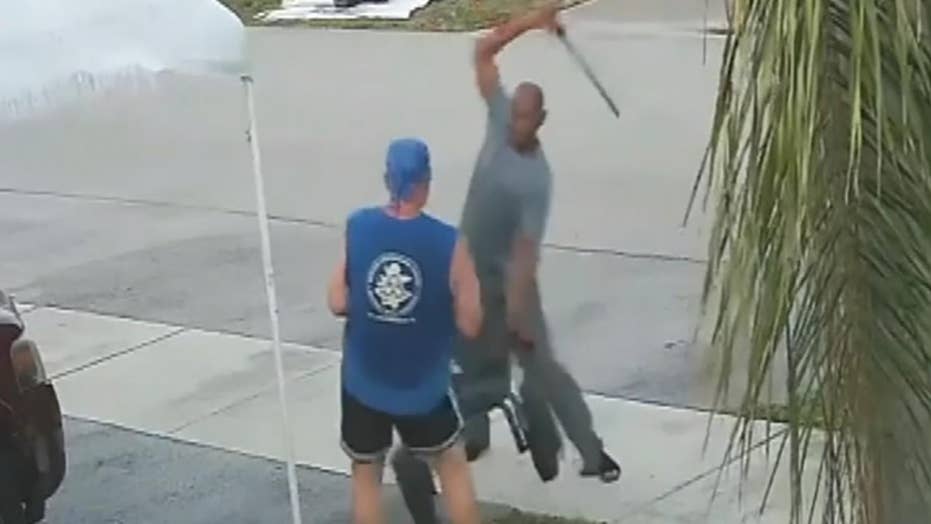 Curtis Miller, 54, was arrested after he allegedly fought another man with a samurai sword over a dump cart.

A Florida man was arrested Monday in a months-old attack during which he allegedly using a samurai sword to threaten and assault a jogger as they fought over a wheelbarrow the victim said he found in a pile of trash.

Curtis Miller, 54, was taken into custody on attempted murder charges stemming from an altercation on July 15, according to online records from the Broward County Sheriff's Office.

Video released by officials shows Miller seemingly attacking a man, named Todd Beavers, with a sword in a residential Oakland Park neighborhood, while trying to pull the cart away from him.

Curtis Miller, 54, was charged second-degree attempted murder after he was caught on surveillance video allegedly using a samurai sword to fight over a wheelbarrow in Oakland Park, Fla., in July. (Broward County Sheriff's Office)

“When he pulled out the sword, I thought, ‘What am I doing?’ I thought, ‘Is he really going to do this?'” Beavers told WSVN. "I couldn't believe that he was really gonna try to kill me for a cart."

Beavers was jogging when he spotted what he thought was a pile of trash up for grabs — at the same time Miller spotted it.

CALIFORNIA BURGLARS KICK DOOR IN, FLEE WHEN THEY SEE HOMEOWNER IS HOME, SCREAMING

Keyla Concepcion, a spokesperson for the sheriff's office, told the news outlet "[Miller] apparently felt that he was there first, so he should have first dibs at anything that was in the pile...Evidently, the jogger felt differently.”

After the alleged altercation, Beavers jogged home -- but he said he didn't realize until he'd almost reached his house that Miller followed him.

“I turned behind me, and he had a sword out, chasing me, so I just kept running,” Beavers said. Outside of his home, surveillance cameras captured a man identified by officials as Miller trying to slash Beavers with a sword.

In the end, Beavers didn't even get the cart. A woman was caught on surveillance video removing the cart from Beavers' property. She claimed the wheelbarrow was stolen from her property, where she was having a garage sale — but she said the cart wasn't for sale.

“I really regret it," the man who almost got attacked by a samurai sword said. "By the time I got here with the cart and he was still chasing me, I felt like, ‘What did I get myself into for a stupid cart?’ I don’t even need it. I just felt really stupid about it.”