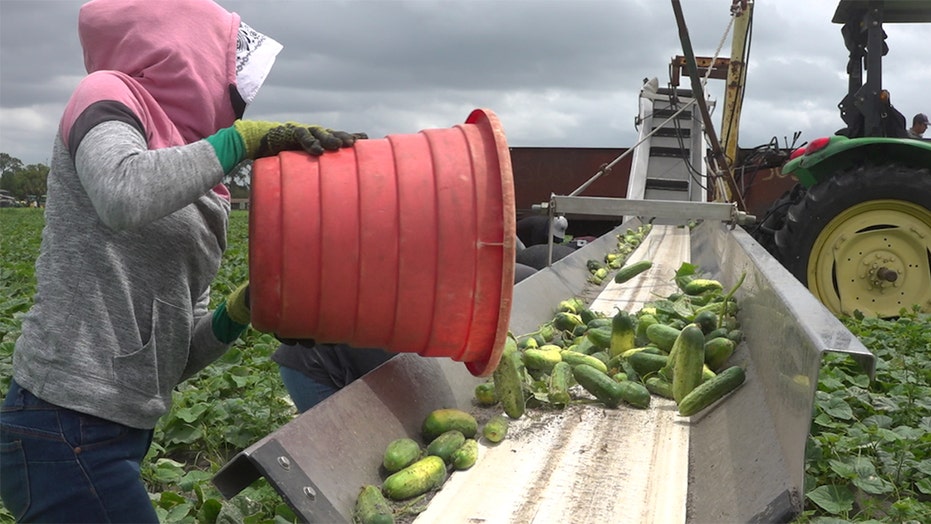 With the coronavirus outbreak limiting the number of produce buyers, Florida farmers are facing severe hardship this spring.

MOUNT DORA, Fla. -- For Hank Scott, it was supposed to be a harvest to remember.

The weather was seemingly perfect. The cucumbers he has been harvesting for over 40 years at Long and Scott Farms in Mount Dora, Fla., were growing even faster than usual.

While walking through his more than 1,100-acre farm, he couldn’t help but admire the striking beauty of this year’s crop.

“This is probably the best pickle crop this farm has ever seen,” Scott told Fox News.

Scott, who has been farming in Florida his whole life, explains that the spring is the best time for local farmers because the Sunshine State gets the opportunity to beat everyone else to the market with little competition. For this year’s spring harvest, he was looking at bringing in a haul of 10 million pounds of cucumbers.

The coronavirus pandemic changed everything.

“Well, at this point, we have a 50 percent loss of our major spring crop,” Scott said. “If they’re gonna keep things shut down for another two or three weeks to the first or middle of May, that’ll probably take the rest of it.”

When asked for clarity, he reaffirmed that stance: a potential 100 percent loss on his cucumber crop this spring.

The issue isn’t related to farming the crops or harvesting. Once cucumbers are picked, they have to be sold, and Scott said therein lies the problem.

Nikki Fried, commissioner of the Florida Department of Agriculture, agrees.

“Our typical routes to the market are to [theme parks], to the cruise line industry, to restaurants and even to schools,” Fried told Fox News.

Right now, many of the state’s largest produce consumers are shut down, leaving fewer buyers for farmers to sell to.

Fried’s office recently released a study that shows the problem is widespread, and to this point, an estimated $522.5 million in Florida crops are now lost. With Florida being the nation’s second-largest producer of seasonal specialty crops, and 13.8 percent of all jobs in the state revolving around the agriculture industry in 2014, the pain is severe.

Shasta Hilyer, a blueberry farmer and owner of Twin Berry Farms in McAlpin, Fla, said her team began harvesting in March right before many businesses shut down.

Now, she doesn’t know what to do.

Hilyer has tried to switch gears and sell locally as much as possible, but it's not the same. This time last year, she had sold about 250,000 pounds of blueberries. So far, her sales are only about 15,000 pounds in 2020.

In total, she’s looking at a 95 percent loss. But because her blueberries can only be harvested once a year, and the whole harvest comes down to a single six-week window in the spring, it will take years to make it up, she said.

Fried’s office has started a campaign called “Keep Florida Growing,” which includes a commodities list meant to help connect consumers with growers. Her message to the community is to “demand” locally-grown produce and head to nearby farmer's markets -- now more than ever.

So far, the program seems to be helping.

“What we’re seeing in the state of Florida is this consumer awakening,” Fried said. “The consumer is finally starting to understand how important it is to support your domestic growers.”

With food pantries seeing unprecedented shortages, a common thought has been for Florida farmers to donate their unsellable crops to help meet the demand. Fried said growers are donating millions of pounds, but it’s simply not sustainable for them.

“For the farmer who’s losing $250,000 a day, how long can they still have their workforce go out there and pick fruits and vegetables knowing they’re just donating it?” Fried said.

Fried, the state's only statewide elected Democrat, is in favor of reopening the state’s economy, but not prematurely. She wants to make sure that the appropriate coronavirus testing is in place and a plan is structured before Florida proceeds forward.

Scott, on the other hand, believes that time is of the essence.

“It’s killing our economy,” Scott said. “We’ve just got to get back to work and sooner than later. I don’t think we can wait two weeks to get it going. It needs to happen now.”