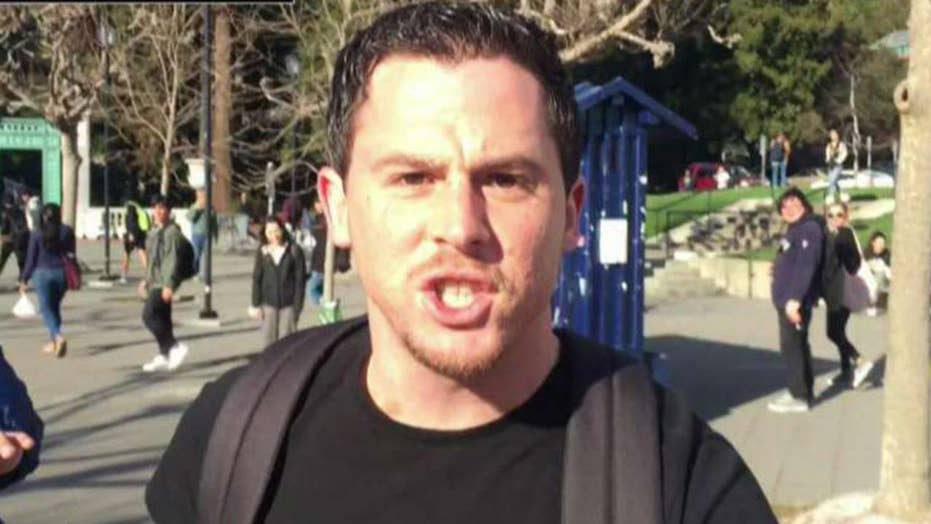 Zachary Greenberg, the suspect arrested in an assault on a conservative at the UC-Berkeley campus

Leadership Institute field representative Hayden Williams and his lawyer Harmeet Dhillon speak out about the attack and the suspect's arrest.

The Alameda County District Attorney’s office has filed criminal felony charges against a software engineer who allegedly attacked a conservative activist at the University of California, Berkeley campus on Feb. 19.

The charges against the engineer, Zachary Greenberg, 28, include three felony counts and one misdemeanor count, according to a criminal complaint obtained by Fox News.

The felony counts relate to assault and causing or intending bodily injury, and criminal threats. A misdemeanor count is related to vandalism, the complaint shows.

The charges come five days after police arrested Greenberg for allegedly attacking Hayden Williams, who is 26, while he was manning a recruitment table on campus for the conservative group Turning Point USA.

“We are pleased that the good investigative work of our police department has led to the filing of these charges,” Dan Mogoluf, assistant vice chancellor at UC-Berkeley, told Fox News. “The university believes that those who violate the free-speech rights of others must be held accountable and face the appropriate consequences.”

Greenberg is scheduled to be arraigned on Wednesday at the Wiley W. Manuel Courthouse in Oakland.

Williams, who is not a student, but rather a field representative for the conservative group The Leadership Institute, was helping Turning Point USA, which is launching a chapter on the campus, to hand out recruitment materials when Greenberg and another man approached him, he said to Fox News.

Williams said Greenberg took exception to pro-Trump signs, as well as one that criticized false hate-crime allegations, in an apparent reference to the case of actor Jussie Smollett, the TV actor accused of fabricating a racist and homophobic assault.

In a confrontation captured on cellphone video, the person Williams identified as Greenberg use vulgarities and taunted the activist. As Williams recorded him with his phone, the man attempted to grab it, knocked over the table and ripped signs.

As can be seen in another video, recorded by a student onlooker, the attacker then punches Williams several times, landing one direct blow to the head and causing injuries to his face, according to the campus police website. The two men who had approached Williams were gone by the time police arrived.

“That’s really the only way we can hold these people accountable, is by first and foremost, is documenting these incidents as they happen,” Williams told Fox News, “and that’s really one thing we teach at Leadership Institute, is just try and record everything, and don’t retaliate, because the left will use anything they can to try to distort the facts.”

Williams’ attorney, Harmeet K. Dhillon, expressed cautious optimism that the case would move forward. “We’re happy that the authorities seem to be taking this seriously, but we’ll suspend judgment on how seriously until we see the resolution of this case,” she said.

Dhillon attributed the skepticism to another case the Alameda County District Attorney’s office handled, in which a former community college professor and anti-fascist activist hit Trump supporters on the head with a bike lock at a UC-Berkeley rally in 2017. The professor, Eric Clanton, was originally charged with felonies for the attacks, which took place during a “free the speech” demonstration. The attack was captured on camera and posted on YouTube.

But Clanton worked out an agreement in which he pleaded no contest to misdemeanor assault, and was sentenced to three years of probation, which will end on Aug. 8, 2021. Given that, Dhillon said, “we’ll see what happens” with charges against Greenberg.

“This is the very epitome of fascism,” Dhillon said, “the use of violence to silence your opponents and making people afraid of expressing their views.”

Much of the Feb. 19 incident was captured on the cellphone of the student onlooker, who told Fox News he was walking by when he noticed the altercation. That video went viral on social media.

Referring to the Berkeley incident, President Trump said Saturday he would put forth an executive order to promote free speech on college campuses.

“He took a punch for all of us,” Trump said of Williams. “And we could never allow that to happen. And here is, in closing with Hayden, here’ the good news. He’s going to be a wealthy young man.”

Trump made the announcement at the Conservative Political Action Conference (CPAC), where he also brought Williams up to the stage. Conservatives have accused many colleges of trying to suppress anti-liberal viewpoints.

Trump urged Williams to sue the man who assaulted him, but added, “he’s probably got nothing.” Williams told Trump that students would continue to defend him, as long as he defended them.