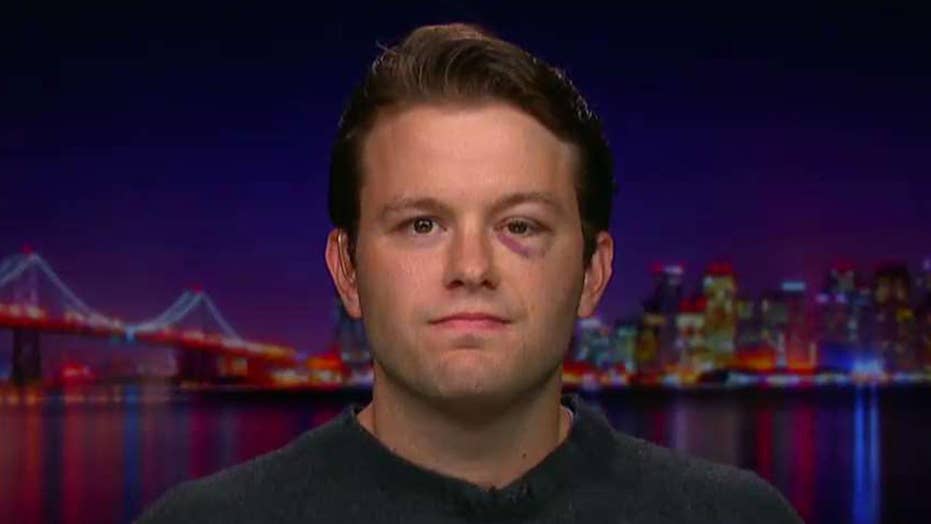 Conservative attacked on University of California-Berkeley campus speaks out

Conservative groups are calling on the University of California, Berkeley to take action against a campus employee who praised an alleged assault on an activist who was recruiting at a table.

He tweeted: “OH MY GOD THE MAGA PEOPLE ON UC BERKELEY CAMPUS YESTERDAY GOT PUNCHED IN THE FACE BY SOMEONE THIS MAKES ME FEEL EMOTIONALLY SO MUCH BETTER.”

In a news release Friday night, UC Berkeley officials announced that police had identified a potential suspect  "Based on current information available to the department," the statement read, "the suspect is not a student at, or affiliate of, the university." The person was not named in the news release, which urged anyone with information to share it and aid in efforts at apprehension.

The release also took pains to say that UC Berkeley did not condone such behavior. "Let there be no mistake," it said, "we strongly condemn violence and harassment of any sort, for any reason. That sort of behavior is intolerable and has no place here. Our commitment to freedom of expression and belief is unwavering.”

The statement did not make reference to Panda, who had thanked the attacker for punching conservative activist Hayden Williams and “not letting it go unchallenged.”

“Hope you aren’t in too much trouble,” he added, before adding an expletive addressed to Turning Point USA, the organization that had been recruiting at the time.

In the incident, captured on cellphone video, two males walked up to the table containing information about Turning Point USA and engaged in an argument with Hayden Williams, who was sitting there.

As Williams began to film the incident with his cell phone, one of the men is seen punching him several times. It was also filmed by at least one witness.

The Turning Point table was also knocked over and their signs were ripped, according to accounts by people who were there.

In an interview Friday with Fox News, Williams said that the two men who approached him took issue with a sign at the table that said “Hate Crime Hoaxes Hurt Real Victims," in an apparent reference to the Jussie Smollett scandal, and accused the group of promoting violence.

He said that a student and his friend walked up to the table "erratically and abruptly," cursing at him for the conservative signs and literature at the table. The signs included support for President Donald Trump and the one about bogus hate crime allegations.

Williams, 26, told Fox News on Friday that he’s been attacked before while helping recruit on college campuses, including two weeks ago at U.C.L.A., but never to the degree he was on Tuesday.

“We get all sorts of flack at Berkeley,” he said. “I’m an easy target for these people. I’m a small guy.”

“It does make me fear for my safety,” he said.

He lamented the glee many are expressing on social media over the violence on Tuesday.

"The person who assaulted me is being hailed as a hero by the campus community, many people are told not to snitch on him. That’s how hostile campuses are to conservatives. People think it’s totally justified to violently attack conservatives because they disagree with their views."

Panda works at Berkeley’s Data Science Education Program as a DevOps Architect, according to the university’s website.

Campus Reform, a news site that is operated by the Leadership Institute, said that UC-Berkeley spokesman Dan Mogulof confirmed Panda's employment at the school.

“This person does not speak for the university, does not represent the university, and does not share the university’s values,” Mogulof told Campus Reform. “The University has made clear through word and deed that violence and harassment are reprehensible and intolerable, no matter who the perpetrators and victims are, or what they believe in.”

“We have sent a message to the entire campus community with a picture of the suspect and a strong request that those with information come forward to report what they know. We very much want to identify the suspects and bring those responsible to justice,” he added.

“While we have no legal ability to control or sanction what employees do during their free time, it should be absolutely clear that any expression of approval and support for violence stands in complete and total opposition to the values, commitments, and policies of this university,” said, adding that Panda "does not speak for the university, does not represent the university, and does not share the university’s values."

Williams, meanwhile, says he will not be intimidated into staying quiet about his conservative views.

He will continue being an advocate, he said, “because of dedication to our beliefs and values.”