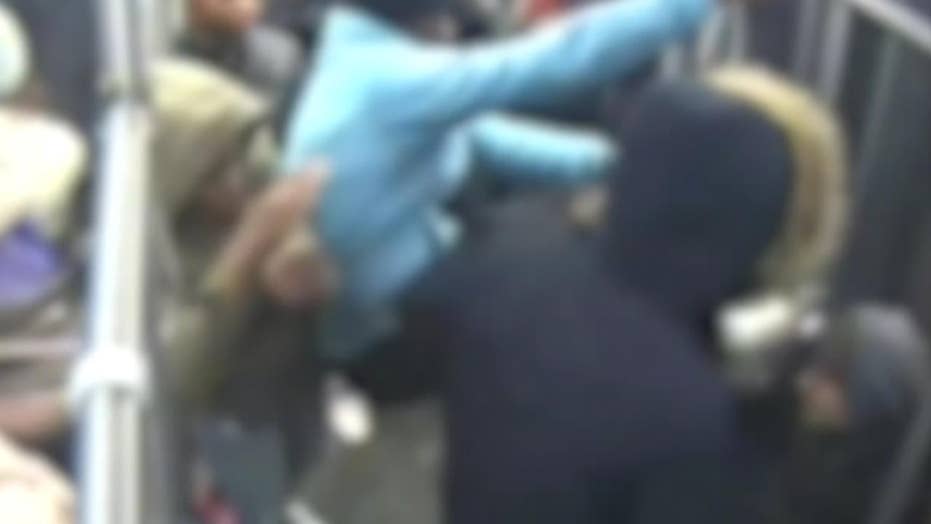 CHICAGO -- The brutal beating of a 68-year-old man by 11 teens on a passenger train here Monday was captured in a disturbing, graphic video obtained by Fox News.

The Chicago Police Department told Fox News the beating is under investigation, but no one is in custody because the victim “was unable to identify his attacker(s) due to his injuries.” A police source told Fox that the Cook County State’s Attorney’s Office “wouldn’t touch” the case if the victim can’t identify those accused or is unable to cooperate.

When reached about prosecuting the case, state’s attorney's office responded: "We are unable to comment."

The footage shows one of the female teens first trying to pickpocket the victim while he’s asleep. The man awakens, tries to fend off the teens, but the woman drags and beats the man.

She then appears to run to another car, and returns with a group of teens including five men and two women. They surround the man seated on the train.

One man pummels the victim, even lifting himself up on the train’s bars to repeatedly kick him in the upper body and face.

The video also appears to show many bystanders failing to intervene.

Police documents indicate the 68-year-old man was left to bleed on Chicago’s red line train. Train workers helped the man off at the Argyle station and authorities were able to interview him.

He told police he fell asleep, then woke up to a group of teens surrounding him trying to pickpocket him. The victim said he told them, "don’t even think about it." The victim said he feared for his safety and swung at one of the teens, but missed then was beaten with “closed fists and foot strikes.”

He was rushed to the hospital and treated for lacerations to the head and body soreness. Police documents indicate he suffered blunt force trauma.

Police later picked up a group of teens near the Argyle train station, detained them and took reports. The teens were returned home.

The Argyle station is on Chicago’s north side in the Uptown neighborhood, which is a few city blocks west of Chicago’s famed Montrose Beach. The station is nestled between notable nearby communities like Andersonville and Wrigleyville.

A single witness is listed on the police report. Fox News has reached out to the witness and has not received comment.