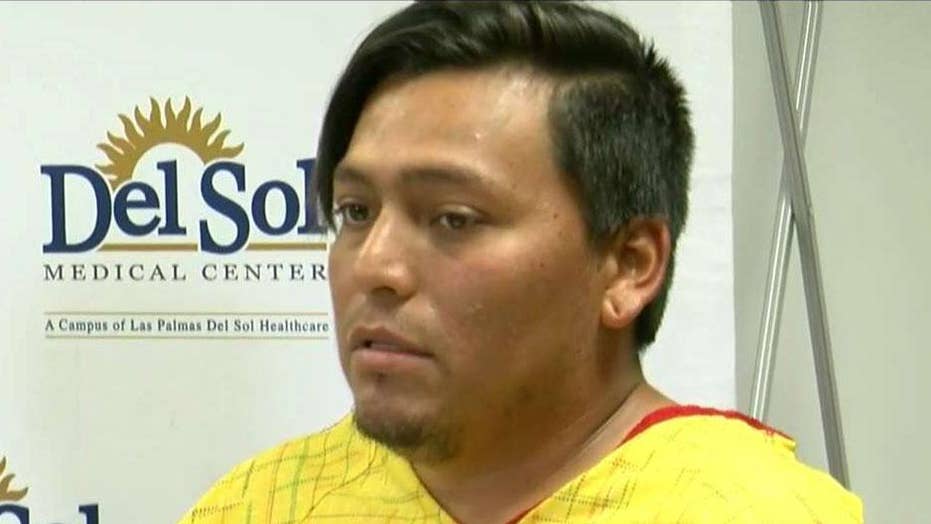 El Paso shooting survivor: First thing I thought about was my nephew

When gunshots rang out at an El Paso, Texas, Walmart on Saturday, Octavio Ramiro Lizarde was one of 27 people injured. Worse still, his 15-year-old nephew was one of 22 who killed.

On Tuesday, shortly before undergoing surgery for a gunshot wound to his foot at Del Sol Medical Center in El Paso, Lizarde shared his harrowing story of survival and loss with reporters.

First and foremost on his mind was his slain nephew, Javier Rodriguez: “I did lose my nephew right in front of me. … It was a horrible image and I hope nobody ever goes through (that).

"It’s very painful," added Lizarde, 23. "And I just hope that my family and I get better emotionally.”

At the time of the shooting, Rodriguez was weeks away from starting 10th grade. The Texas American Federation of Teachers (Texas AFT) wrote in a Facebook post that Rodriguez attended Clint Independent School District, a public school district in eastern El Paso County.

Among the 22 killed in Saturday's shooting, 13 were U.S. citizens and seven Mexican nationals. The fallen were as young as 15 and as old as 90, according to a list from the medical examiner’s office distributed at a news conference on Monday afternoon.

As Lizarde revisited the memory of that grim Saturday at Walmart, he sat in a wheelchair, surrounded by family and friends as he tried to recall the chaotic episode with precision.

“I heard the gunshots,” he said, remembering how the sound sent people running.

“I grabbed him [Rodriquez], and shots were fired. So I took him to the back of the room … and everything happened to my nephew and when I was trying to call back to where he was hiding he [the gunman] shot my foot,” Lizarde said.

The mass shooting — one of the deadliest in modern U.S. history — unfolded around 11 a.m. Saturday. The gunman -- 21-year-old Patrick Crusius is suspected in the violent spree -- opened fire in the store, initially killing at least 20 and injuring another 27. Two more gunshot victims have since died.

Lizarde told reporters he's grateful to be alive. “He had the chance to kill me but he didn’t," he said, "because God’s with me.”

Dr. Justin Orr, an active-duty member of the military and an orthopedic surgeon with William Beaumont Army Medical Center in El Paso, was scheduled to operate on Lizarde on Tuesday afternoon.  Orr told reporters Lizarde’s recovery could take up to a year, if not longer, and will involve no fewer than three successive operations.

“Of course there is a high risk of infection in cases like this with high-velocity gunshot wounds,” Orr said, citing the risk that Lizarde could yet lose his leg. “It’s not just the bone loss that Octavio has. It’s also the tremendous amount of soft-tissue damage. And that’s why the surgery we are going to do today is going to try to minimize the risk of long-term complications with infection.”

Despite the looming challenges, Orr said he is “very optimistic” that Lizarde will walk again.

Officials with the hospital told reporters Lizarde and the other victims of Saturday’s shooting will not have to worry about treatment costs because of “victims' survivor funds and other mechanisms of compensation.”