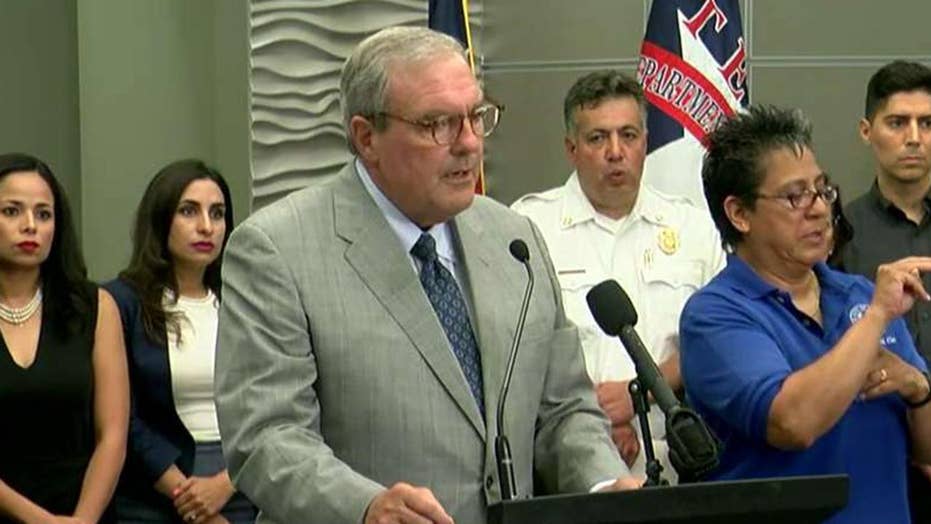 The 22 people killed in Saturday's mass shooting in El Paso, Texas, have been identified and include 13 U.S. citizens and seven Mexican nationals, officials said Monday.

A list from the medical examiner’s office distributed at a news conference on Monday afternoon shows that the victims ranged in age from 15 to 90.

Victims also included one German citizen and the 15 –year-old whose nationality is unknown, the list revealed.

The mass shooting — one of the deadliest in modern U.S. history  — unfolded at a Walmart around 11 a.m. Saturday, as 21-year-old suspect Patrick Crusius, allegedly opened fire in the store, initially killing at least 20 and injuring another 27. Two more gunshot victims have since died.

People comfort each other during a vigil for victims of Saturday's mass shooting at a shopping complex Sunday, Aug. 4, 2019, in El Paso, Texas.  (AP Photo/John Locher)

The number of those injured was initially 26, but at a news conference on Monday afternoon police said they increased that number to 27 because one person was self-admitted to the hospital and left on his own.

Police added that among those injured was an infant with broken bones.

Police said 15 patients are still in the hospital, two of whom are listed in critical condition. They added nine of those injured have been discharged.

The Walmart was near capacity at the time of the shooting, with hundreds of shoppers inside along with 100 employees during the busy back-to-school shopping season.

The dead, ID'd via a handout from the medical examiner's office, were:

Benavides was reportedly at the self-checkout line while his wife was in the bathroom when he was shot and killed. Benavides was an Army veteran and a well-known mass transportation bus driver, KFOX 14 reported.

Rodriguez was weeks away from starting 10th grade. The Texas American Federation of Teachers (Texas AFT) wrote in a Facebook post that Rodriguez was a student from the Clint Independent School District, a public school district in eastern El Paso County.

Jordan Anchondo was fatally shot while trying to protect her son when the gunman opened fire in the crowded shopping area, her sister told The Associated Press.

"From the baby's injuries, they said that more than likely my sister was trying to shield him," Leta Jamrowski said while at the University Medical Center of El Paso. "So when she got shot she was holding him and she fell on him, so that's why he broke some of his bones. So he pretty much lived because she gave her life."

The mother of three had gone to the big-box store to get a jump on back-to-school supply shopping earlier in the day.

Her husband, Andre Anchondo, was also killed in the attack. He had recently turned his life around after struggles with drug dependence and had started a business in El Paso building things from granite and stone. He was finishing up a home for his family, his friend Koteiba "Koti" Azzam told The Associated Press.

Family members hug to each other outside the family reunification center at MacArthur Elementary-Intermediate School in El Paso, Texas on Sunday, Aug. 4, 2019.  (Lola Gomez/Austin American-Statesman via AP)

Jorge Calvillo Garcia, of Torreón, Mexico, was helping his son and granddaughter raise money for her soccer team outside Walmart when he was shot and killed, KFOX reported, citing his nephew who reportedly added that Garcia died shielding the young girls on the team during the massacre.

Garcia’s son was injured during the shooting and is in serious condition at a hospital, Telediario reported, adding that he already underwent four surgeries.

David Johnson’s niece said he died in the massacre protecting his wife and 9-year-old granddaughter, according to KFOX.

Ivan Hilierto Manzano a father of two sons from Ciudad Juarez, Mexico was also killed in the shooting, El Diario de Juarez reported, adding that he was a marathon runner.