The mayor of El Paso, Texas, Oscar Leeser, nearly walked out of a press conference with the microphone after being challenged on why the city delayed declaring a state of emergency with Title 42 set to expire on Wednesday.

During a press conference on Thursday, the mayor was pressed on why was delaying on making that call.

FILE - Migrants wait to get into a U.S. government bus after crossing the border from Ciudad Juarez, Mexico, to El Paso, Texas, Monday, Dec. 12, 2022. The mayor of the Texas border city declared a state of emergency Saturday, Dec. 17 over concerns about the community's ability to handle an anticipated influx of migrants across the Southern border. El Paso Mayor Oscar Leeser issued the state of emergency declaration to allow the city to tap into additional resources that are expected to become necessary after Title 42 expulsions end on Dec. 21.  (AP Photo/Christian Chavez, File)

One reporter asked city officials about migrants coming up through manholes, even as recently as the day before.

City Manager Mario D’Agostino confirmed that the city had seen videos of migrants coming up through manholes, running across the border then across the highway.

He explained the difficulty was figuring out how the migrants were getting through and then asking for an increase in patrols in those areas.

By having an increase in patrols, the city can then get a consensus of how many people are coming through by way of sewer and drainage systems, and to get them documented.

DENVER MAYOR DECLARES STATE OF EMERGENCY AFTER ARRIVAL OF MIGRANTS FROM SOUTHERN BORDER: ‘AN IMMENSE STRAIN’

After being questioned about funding and the city’s handling, sometimes disagreeing with City Manager D’Agostino, Leeser moved to end the press conference.

After making his closing remarks, the mayor picked up the microphone and started to walk away.

City officials declared a state of emergency on Saturday, at which point Leeser said he could no longer keep residents safe.

Migrants at the front of the line are processed for entry by U.S. Customs and Border Protection. (Fox News Digital / Jon Michael Raasch)

El Paso, a town located along the U.S.-Mexico border, continues to witness an influx of migrants into its community. It is also expecting a surge of migrants when Title 42, a Trump-era immigration policy that reduced the number of asylum seekers the U.S. would allow under the COVID pandemic, expires on Dec. 21.

With the emergency declaration, Leeser is requesting additional resources and support from the state.

The request includes asking for support in staffing for feeding and housing migrants, resources to transport the migrants into other cities, and additional law enforcement personnel to help ensure the safety of residents and the migrants.

President Joe Biden has chosen not to continue the Title 42 rules and courts have allowed them to expire. Nineteen Republican states, including Texas, have sued to keep the rules in place. 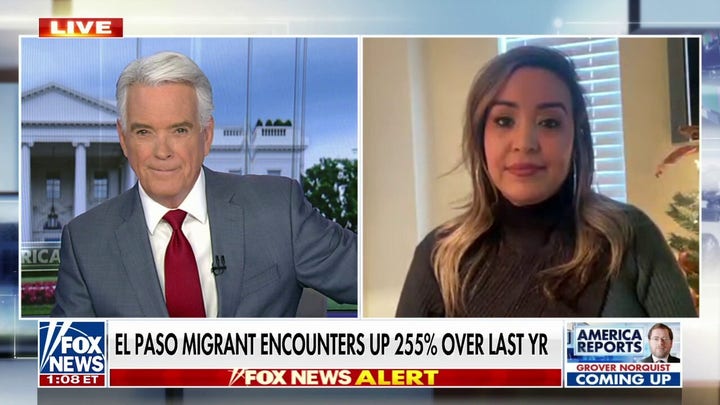