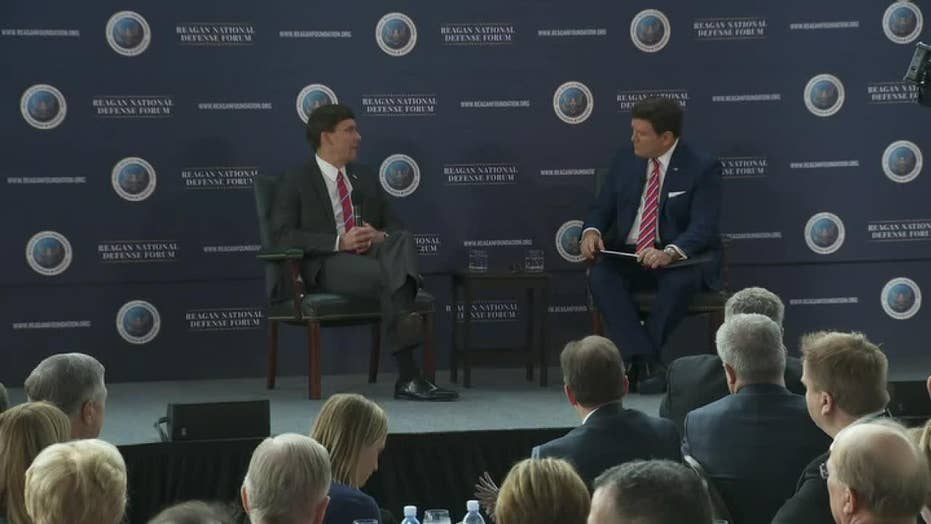 Esper: Reports claiming additional US troops being sent to Middle East are false

Secretary of Defense Mark Esper said Saturday that reports saying as many as 14,000 additional troops would be heading to the Middle East to counter Iran are "false."

Esper sat down with Fox News’ Bret Baier at the Reagan National Defense Forum in Simi Valley, California, to discuss threats from the Middle East, China, North Korea and other parts of the world, and the U.S. military’s readiness to tackle such threats.

“Those are false reports," Esper said of the media's coverage this week that the U.S. was considering sending up to 14,000 more troops to the Middle East. "I don't know where they came from."

"We've deployed 14,000 troops since May of this year. But right now, I'm not looking at any major deployments coming up in the region,” Esper said when Baier asked if additional troops would be sent to the Middle East.

“That said, on a day-to-day basis, we monitor what's happening in the Middle East, on the Korean Peninsula, in the European theater, all over the world. And we make adjustments to our forces up or down based on what the needs of the commander are. And that happens again, routinely. That's just what we do,” Esper continued.

Esper said that the14,000 troops deployed since May came just before Iranians were seizing or trying to disable ships in the Strait of Hormuz, when Iran allegedly bombed Saudi Arabia’s oil facilities, and when the U.S. had to shoot down an Iranian drone. He said he deployed some additional forces a month or so later, but since that time “we haven’t seen that level of activity.”

However, Esper did concede that the threat from Iran to the U.S. is increasing.

“Given what's happening in the streets of Iran these days, you see a regime under stress. It's a good thing that the Iranian people are also seeking the prosperity, the liberty, the freedoms that we enjoy in this country, “ Esper said.

“So, you see a regime increasingly under stress. I think we need to be prepared for any contingency,” he said.

Two defense officials told Fox News this week that the Pentagon is considering a plan to add up to 7,000 additional forces to the Middle East to counter an increasing threat from Iran.

Recent reports have found that Iranian forces may have killed more than 1,000 protesters. The demonstrations began after the government, amidst economic discontent, raised the price of gasoline by 50 percent.

Baier asked Esper if he saw any evidence of missiles going into Iraq from Iran, which could threaten U.S. troops stationed in Iraq.

Esper said he would not comment on anything “in terms of intelligence,” but there had been reports about rockets being fired at American forces on bases in Iraq.