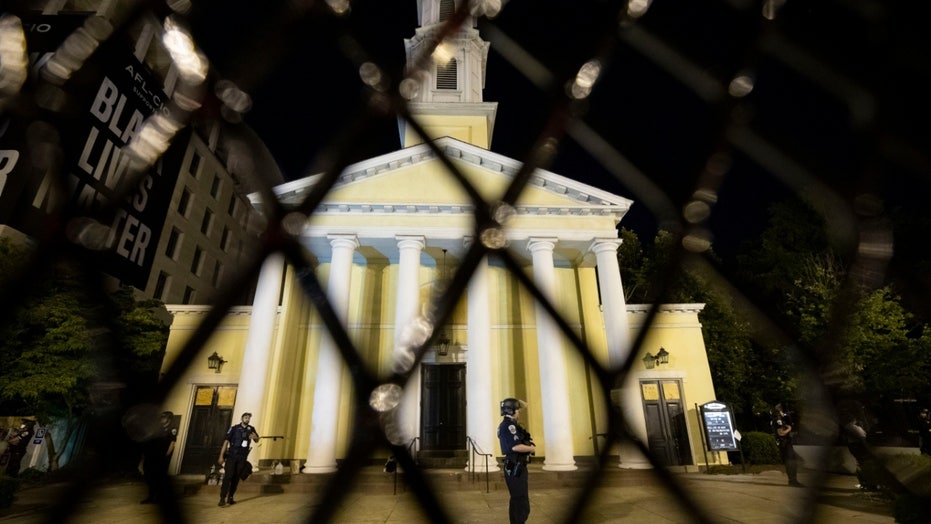 A white female protester was filmed yelling in the faces of two black male police officers in Washington, D.C., Tuesday in a viral video that has been viewed more than 2.1 million times, telling them that "they're a part of the problem."

The video was tweeted by Henry Rodgers, a senior congressional correspondent for The Daily Caller, who has been covering protests in the nation's capital since the death of George Floyd in Minneapolis on May 25.

“Why don’t you take off your uniform? Are you afraid of police?” the white woman, wearing a baseball cap and facial covering, yells at two black officers in a police line stretching across the street in the newly renamed Black Lives Matter plaza.

Rodgers, who is filming the altercation, interjects: “I have a question for you. You’re white and you’re telling this to two black police officers? Don’t you see the problem with that a little bit?”

“No, I don’t,” she responds. “Just because I’m white and I haven’t experienced racism myself doesn’t mean I can’t fight for justice.”

Another video filmed by Emily Jashinsky, a culture editor for the conservative online magazine, The Federalist, showed the exchange from a different angle.

Jashinsky captured a second moment when the same protester approaches a black female officer, telling her to “Smile for Breonna Taylor.” The woman points her cell phone in the face of the police officer, who does not respond and remains expressionless.

Rodgers shared an additional video of other protesters in D.C. calling for police officers to be poisoned. The edited clip appeared to be originally shared by the conservative nonprofit Turning Point USA.

Hundreds of troops with the Washington, D.C., National Guard have mobilized to protect monuments in the nation's capital, a senior U.S. defense official told Fox News on Wednesday.

Protesters have targeted statues and other historical markers during ongoing demonstrations in the wake of George Floyd's police custody death in Minneapolis at the end of May. In a protest at the D.C. Emancipation Memorial Tuesday, one demonstrator announced that on Thursday they would tear down the memorial's statue of Abraham Lincoln standing over a freed slave.

President Trump warned Tuesday morning that anyone caught vandalizing monuments or any other federal property would be subject to arrest and face up to 10 years in prison under federal law.

A woman holds up a sign saying "police the police" as she confronts a police line while demonstrators protest on a section of 16th Street that has been renamed Black Lives Matter Plaza, Tuesday, June 23, 2020, in Washington, D.C.  (AP)

On Monday, protesters attempted to tear down a statue of Andrew Jackson in Lafayette Square by the White House, and defaced it with the phrase "killer scum," Reuters reported. Interior Secretary David Bernhardt, who visited Lafayette Square afterward to witness the destruction, said the country “will not bow to anarchists," and that "law and order will prevail, and justice will be served.”

The Lincoln Memorial and WWII Memorial were also defaced in earlier protests.

Another reporter for The Daily Caller, Shelby Talcott, said she was swarmed and shoved by protesters near the White House on Monday night before police stepped in to protect her.