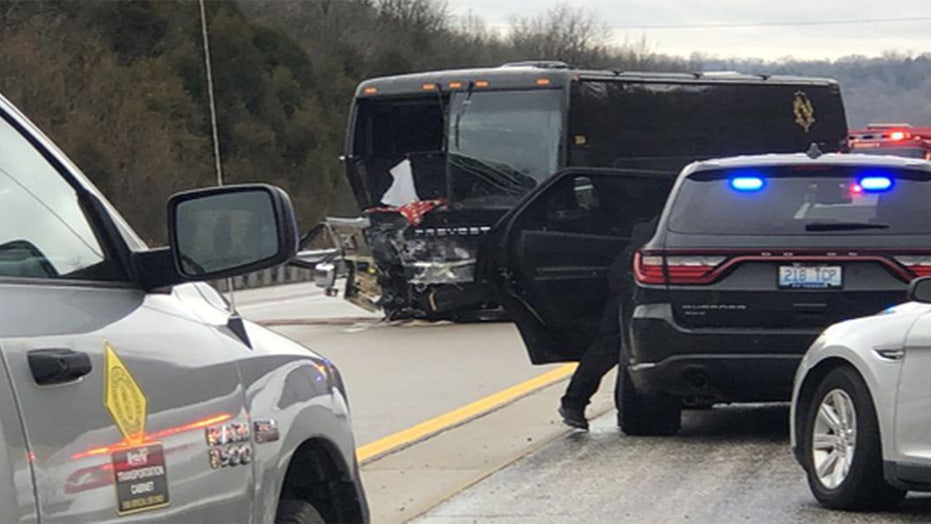 A wrong-way driver died Saturday after slamming into a bus carrying Covington Catholic High School students who were home from the March for Life rally in Washington, D.C., according to reports.

The crash was reported around 7 a.m. in Campbell County, Ky., according to Fox 19 Cincinnati.

The charter bus driver was injured and went to the hospital, the station reported. A student suffered a bloody nose. A couple of adult chaperones suffered bumps and bruises.

“This morning, a bus carrying students and chaperones home from the March for Life in Washington, DC was involved in an accident," Covington Diocese spokeswoman Laura Keene said, according to the station. "EMT personnel and the Campbell County police have been at the scene and are handling the matter. Please join us in praying for everyone involved in this accident.”

THE FIVE REACTS TO CNN SETTLEMENT WITH COVINGTON STUDENT: 'THIS IS A TURNING POINT'

The vehicle that hit the bus was traveling southbound in the northbound lanes of the AA Highway, the station reported.

The bus was in a caravan with three other buses that Covington chartered to take students to the rally.

Ricky Lynn told the station that the vehicle almost hit him as he was taking a friend to the airport.

“It’s pretty bad this morning," he said. "The weather’s bad. It’s one of those things we try not to get ourselves into.”

WLWT-TV reported that a priest who was on one of the buses administered last rites to the person who was killed.

The March for Life Rally was held Friday.

Last year, a group of students from Covington Catholic attending the same annual anti-abortion rally drew national attention for an encounter with a Native American man.

Widely-shared video of the encounter showed one of the students, Nicholas Sandmann, and the Native American man, Nathan Phillips, standing close to each other, with the young student staring and at times smiling at Phillips as he sang and played a drum. Media commentary in the aftermath depicted the students as racially insensitive. Sandmann and Phillips later said they were both trying to defuse tensions among conflicting groups converging at the Lincoln Memorial.