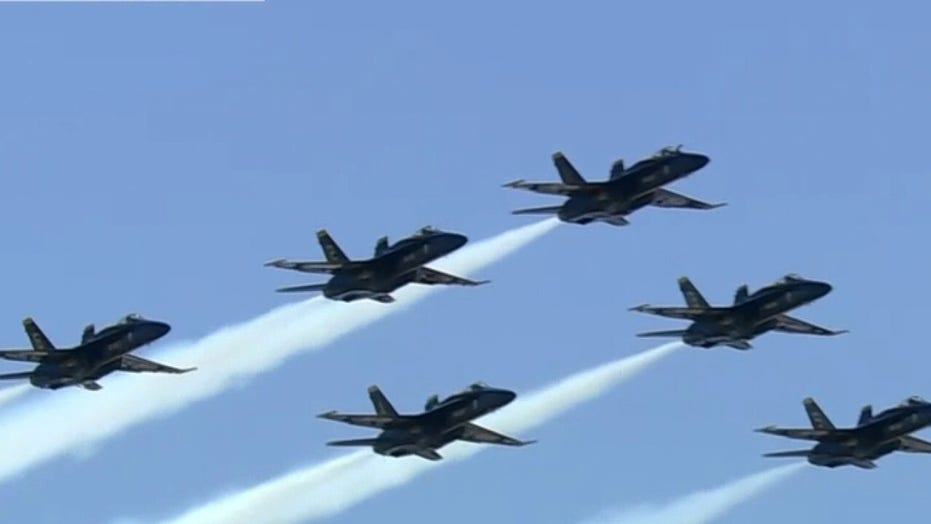 Residents in the northeastern U.S. were treated Tuesday to a joint flyover by the Air Force Thunderbirds and the Navy's Blue Angels in honor of the first responders and essential workers who are continuing to perform their duties during the coronavirus outbreak.

The flyover began around noon over the George Washington Bridge between New Jersey and Manhattan, and continued over New York City’s other boroughs before crossing parts of Long Island and Connecticut.

Then the teams headed to south for a similar display in and around the cities of Trenton, N.J., Philadelphia and Wilmington, Del.

“We are truly excited to take to the skies with our Navy counterparts for a nation-wide tribute to the men and women keeping our communities safe.” Air Force Lt. Col. John Caldwell said earlier this week. “We hope to give Americans a touching display of American resolve that honors those serving on the frontline of our fight with COVID-19.”

Caldwell served as Thunderbird 1 and mission commander for the flyover, which was given the social media hashtag #AmericaStrong.

Cmdr. Brian Kesselring, Blue Angels commanding officer and flight leader, praised the dedication of those on the front lines and said it is an honor to highlight their perseverance and sacrifice.

People watch the aircraft pass in front of the New York City skyline as seen from Weehawken, N.J., on Tuesday. (AP)

“We are incredibly honored to have the opportunity to salute those working on the frontline of the COVID-19 response, we are in awe of your strength and resilience,” he said in a statement. “Thank you to all of those in essential industries keeping our nation moving forward. We will get through this. We are all in this together.”

These missions are some of several planned for the upcoming weeks, according to both teams.