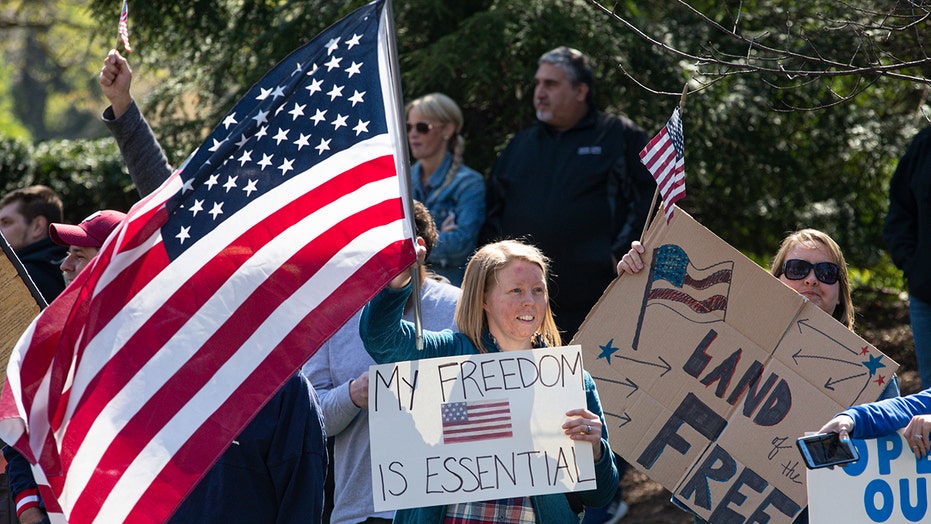 Demonstrators rallied in states across the country this month to protest governor-imposed stay-at-home orders that have kept Americans out of work for weeks to prevent the spread of coronavirus, with many arguing that the strict measures attack their constitutional freedoms and liberties.

Governors in at least 43 states have instituted quarantine restrictions that temporarily banned large public gatherings, closed schools and shuttered most businesses, effectively pausing the economy and hurting the livelihoods of many Americans.

Unemployment skyrocketed as measures to protect against the pandemic squeezed the economy, with total claims over the four weeks ending on April 11 reaching nearly 22 million workers and an unemployment rate close to 13 percent.

Despite health officials warning that reopening states and returning to daily life too soon could backfire and result in a new surge of COVID-19 cases, the protests have continued.

From thousands flocking to the state Capitol in Olympia, Wash., to just over a dozen marching outside the Madison County Courthouse in Alabama, Americans in at least 30 states have voiced their support for reopening businesses.

Thousands of protesters rallied outside the Washington state Capitol on April 19 to call for an end to Gov. Jay Inslee’s stay-at-home order, with some holding signs that read “Give Me Liberty Or Give Me COVID 19!” and “End the Shutdown.”

Inslee responded to the demonstration in a written statement, saying that while he supports free speech, rallies and politics won’t determine what is best for the health of Washingtonians.

Washington has been under lockdown since March 23.

There have been several demonstrations stretching across California, from Sacramento, where hundreds protested at the state Capitol on April 19, to San Clemente and Huntington Beach.

Hundreds gathered in Huntington Beach on April 17 to protest the government-imposed order, while hundreds more came together in San Clemente on April 19 over concerns about the need to “defend constitutional rights.”

Demonstrators in Encinitas, about 25 miles north of San Diego, rallied against closures of beaches and walking trails on April 19.

California Gov. Gavin Newsom said over the weekend that protesters should practice social distancing and "do so safely" when expressing their free speech. The statewide lockdown has been in effect since March 19.

Thousands of trucks and cars descended on the Michigan state capital of Lansing on April 15 as angry residents protested Gov. Gretchen Whitmer’s strict stay-at-home orders. The protest even drew the support of President Trump, who tweeted “LIBERATE MICHIGAN!”

While much of the anger from the protest was directed at job losses and the economic freefall, other complaints ranged from bans on purchasing items deemed nonessential to prohibitions on using motorboats but allowing kayaks and canoes.

Flag-waving, honking protesters drove past the Michigan Capitol in Lansing on April 15 to show their displeasure with Gov. Gretchen Whitmer's orders to keep people at home and businesses locked during the new coronavirus COVID-19 outbreak. (AP Photo/Paul Sancya)

Whitmer defended her stricter measures, stating that Michigan has been hit particularly hard by the contagion and that the orders are a way to flatten the curve.

The order has been in effect since March 24.

The streets of Harrisburg, Pa., on April 20 were lined with hundreds of protesters, with many standing close to each other and not wearing masks. Some carried American flags and "Make America Great Again" flags, while others carried signs that read “Open Pennsylvania Now.”

Protesters demonstrated at the state Capitol in Harrisburg, Pa., on April 20 to  demand that Gov. Tom Wolf reopen Pennsylvania's economy even as new social-distancing mandates took effect at stores and other commercial buildings. (AP Photo/Matt Rourke)

Gov. Tom Wolf placed the entire state under a stay-at-home order on April 1.

A group of about 20 protesters, including children, rallied outside the Madison County Courthouse on April 20 in support of the “Reopen Alabama” movement, AL.com reported.

Alabamians have been under a statewide lockdown since April 3.

A smaller protest of about 30 people gathered in Albany on April 16 to demand Cuomo reopen the state, Syracuse.com reported.

New Yorkers have been living under lockdown since March 22.

A small group of protesters gathered for an “End the Shutdown” rally in Virginia's Capitol Square in Richmond on April 16 to voice their displeasure with Gov. Ralph Northam’s move to extend the state’s lockdown orders.

The state has been under lockdown since March 30.

Hundreds of protesters gathered at the Texas state Capitol in Austin on April 16 for a “You Can’t Close America” rally. Protesters chanted "Let Us Work" and "We are essential."

Gov. Greg Abbott announced a series of measures to start rolling back the stay-at-home order and is determined to get his state back to normal to avoid greater economic difficulty.

The order has been effective in Texas since April 2.

In the Northeast, protesters rallied in Maryland, Connecticut, Maine and New Hampshire to end the lockdown.