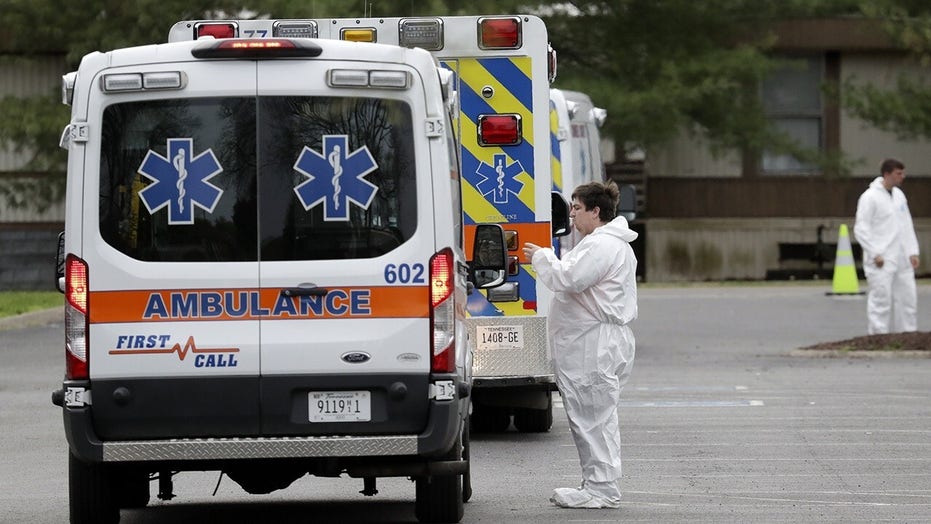 The coronavirus pandemic is uniting people in ways that one New York first-responder told Fox he hasn't seen since the September 11 attacks.

And he would know, considering he was working as an NYPD detective in Manhattan when the planes flew over his head.

Stephen “Bones” Reid is now an EMT paramedic in Westchester County, N.Y., where there are currently more than 9,000 positive cases of coronavirus. He was working in Chinatown on September 11, 2001, when the impact of the first plane set off car alarms on the street around him.

Asked whether he thinks he is more at risk of contracting the virus as an active-duty first responder who also experienced Ground Zero up-close and personal, Reid responded frankly.

"More than likely. But I'm also on borrowed time to begin with," he said. "I was one of the lucky ones."

Many in the 9/11 first responder community are still experiencing respiratory ailments, making them among some of the most vulnerable in the current pandemic.

That’s another area where Reid said he sees some eerie parallels between our current situation and September 2001, since he's not the only hero from that day who is still on the frontlines nearly two decades later.

"Even if they knew that the air wasn't safe, just like now the air isn't safe, you still have people that will go right back in it," Reid said. "It's just the selflessness, the sacrifice that, you know, it's a calling."

In his current position as an EMT paramedic for the Ossining and Valhalla Volunteer Ambulance Corps, Reid said he hasn’t had to respond to many calls where the coronavirus was a factor. Still, he's been exposed to patients carrying the virus already and is now paying a different price than most.

"I had a potential exposure right from the very beginning. It was, you know, it was the call that you don't want - a messy call. It was a respiratory distress. And then a couple days later, I find out that she was positive, right? So now, my kids’ mother has them for eight weeks," Reid said, his voice trailing off. "It's just very foreign to me, they're with me all the time. So now I go home and I'm alone.”

He told Fox he considers himself one of the lucky ones.

Reid's selflessness goes beyond the call to serve. He recently spent some $1,500 out of his own pocket to try and stock-up on supplies that he said are already running low.

"We've probably got a week's worth of supplies," Reid estimated. "And they said the apex hasn't even hit yet."

His network of ambulances that span multiple localities have been trading and sharing supplies between themselves to make ends meet. “A lot of stuff that's out [in the ambulances] right now, it’s stuff that's been donated,” he said, referring places where he’s working.

Facing dwindling stockpiles of supplies, for both himself and potential patients, Reid started reaching out to local businesses that might have things that would be critical to his work, and that may not be thinking of donating despite being closed. He’s now become a one-man outreach machine on Facebook and sometimes simply on his phone.

Auto-body shops, painters, tattoo shops, even the food service industry have things of value to him, Reid said. If kitchen gloves are all a business has to offer, "I'll use those gloves to decontaminate my ambulance, and use the medical gloves on patients," he added.

Even some schools might be sitting on supplies that could be of great value to the first responder community, he said. "A lot of people are looking for those old-school goggles my dad used to wear when he was doing the weed whacking,” Reid noted. “They went out of style in 1982, and they're in high demand right now."

Thankfully, Reid discovered that as soon as he reached out for help, the donations started coming in "like wildfire.”

A friend in Florida is sending him highly coveted N95 masks. Operation Ward 57, a charity supporting wounded veterans and their families, gave him $300 to "do God's work." Someone sent three pizzas to the ambulance depot on the day that Reid went in to clean them. A friend with a special-needs child ordered him a case of gloves. So did a local coffee roaster, who sent 50 pounds of coffee his way.

Reid is a fixture in the obstacle race circuit and was gifted 1,000 tickets for the endurance challenges known as Spartan Death Races by Spartan CEO Joe De Sena, a close friend of his. Reid is currently distributing those tickets on his Facebook page and says any proceeds will be going directly to supplies for his fellow first responders.

De Sena’s donation didn’t end with entry codes for his renowned, if not grueling races, despite the unique challenges he himself is facing.

“We put [Stephen] in touch with a bunch of our suppliers to get them some masks," De Sena told Fox News.

"He doesn't even know it yet, but we've got a half a million ponchos" that are being distributed to first responders like his friend, and others across the country, De Sena added.

“YOU CAN REPLENISH YOUR STOCK LATER, WE NEED IT NOW”

Asked whether he thinks there might be some other people or businesses out there with supplies that could be valuable to someone like him, and who just aren't thinking of donating them, Reid said, "100 percent, absolutely.”

He is hoping people everywhere, not just in the New York area, will start thinking of donating what they can to the first responders where they live, and who may not necessarily be short on supplies right now, but who could be soon. And Reid said there has never been a better time or opportunity for anyone to help.

People who think they might have something of use, whether it’s rubber gloves, coffee or surgical masks, should be reaching out to responders wherever they are, Reid said. He’s always looking for more at the Ossining and Valhalla Volunteer Ambulance Corps where he spends some of his time.

And while the donations he has received -- and the sense of unity they’ve created -- have been inspiring, Reid cautioned that it cannot be a flash in the pan as it has in the past.

"I pray to God that this brings us back together again and it's not like, you know, September 12th and there's flags everywhere and everyone's got a flag on their car," Reid said. "And then February, March those flags start getting tattered, you know? Common courtesy goes out the window."

“I just hope we learn from this, that we come out stronger," he said. "Everyone has a role in this."