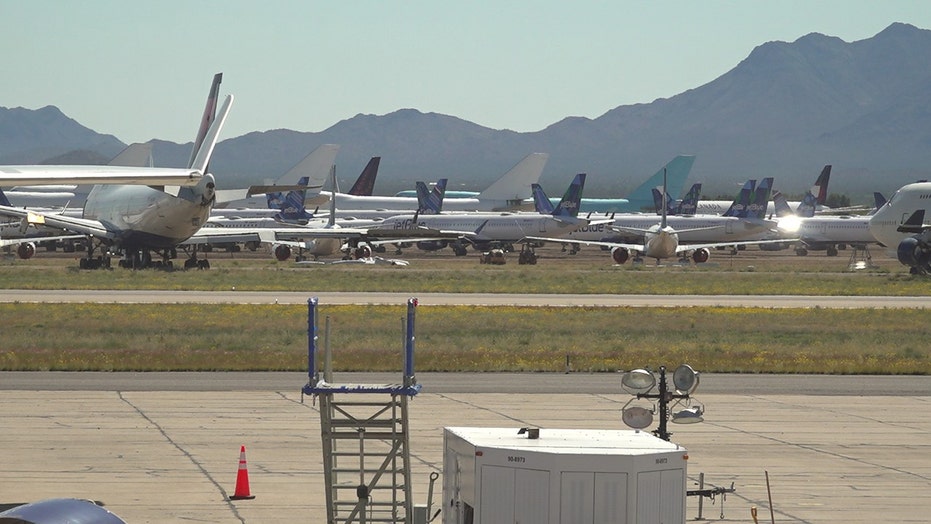 The coronavirus pandemic has canceled thousands of flights, grounding airplanes across the world. Some airlines are sending their planes to temporary homes in the Southwest desert where they can be cared for in the long-term. The extra business is helping create revenue and hire new employees.

MARANA, Ariz. — Thousands of daily flights continue to be canceled due to the coronavirus pandemic, forcing to ground airplanes across the world.

,In the U.S., some airlines are sending their aircraft to temporary homes in the deserts in the Southwest, where they can be cared for in the long term until operations can return to normal.

Several airports are offering long-term parking spots all the way from New Mexico to California. From small regional air centers to big international airports, everyone is lending a helping hand during these trying times.

The coronavirus pandemic has forced the cancellation of hundreds of flights daily, forcing airlines to park their planes indefinitely. (Stephanie Bennett/Fox News)

In Arizona, the Marana Regional Airport has allowed 19 American Eagle planes to be parked there for the foreseeable future.

Miller said the desert is an ideal climate for storing planes. The dry heat means they don’t have to worry about corrosion or about natural disasters like hurricanes, tornadoes and hail damage. However, as an added protection to the harsh desert sun, they do wrap the airplanes' windows, engines and tires.

“At this point, no one has any idea how long they are going to be here, but we are planning it could be a year, could be longer,” said Miller.

According to FlightAware.com, the COVID-19 pandemic has forced the cancellation of up to 80 percent of the commercial flight volume across the world.

FlightAware provides real-time predictions and insights into the aviation industry. They say worldwide commercial flight traffic is down 80 percent because of the coronavirus outbreak. (FlightAware.com)

Over at Phoenix Sky Harbor International Airport, which is also housing about a dozen aircraft, officials told Fox News that passenger numbers have dramatically reduced. Traveler traffic, which normally sees around 125,000 passengers a day, is down 85 percent. They say American and Southwest Airlines have reduced daily flights by at least 50 percent.

Down Interstate 10 is the Pinal County Airpark. They’re used to storing and maintaining planes. For the past year, they’ve already been housing Boeing 737 Max Aircraft after they were grounded for safety concerns. The airport is quickly filling up after accepting the coronavirus-related planes.

“Delta, Air Canada, Jet Blue, and American Eagle are some of the companies that sent a lot of planes down…it’s a real shame and I can’t wait to see them leave because that will mean things are better,” Jim Petty, Pinal County Airpark manager, told Fox News.

Bird's-eye view of the Pinal County Airpark in Arizona. They've taken in hundreds of planes from across the world. (Boneyard Safari)

Ascent Aviation Services helps store, fix, and sell airplanes at the Pinal County Airpark. They’re taking in planes from across the world who were impacted by the virus.

“We’ll probably have about 350 coronavirus aircraft here and another up to 50 in Tucson,” said David Querio, president of Ascent Aviation Services.

Several other airports across the Southwest are also offering long-term parking spots. The Roswell International Air Center in New Mexico, which sits on a 4,000 acre retired Air force Base, in one of those airports.

“We have runways and taxiways that are no longer used so we have places we can put everything…it’s impressive to go driving around out on those taxiways and see all of those tails sticking up in the air; we look like a really busy place and in a different sense we are,” Scott Stark, the air center's director, told Fox News.

When everything goes back to normal, most of these airplanes will go back into service but some may not be so lucky. Some may be sold or used for parts.

“We have other airplanes that are coming from airlines that were at the end of their life, this pandemic was sort of a last straw that said OK now’s the time to take them out of service for good,” said Stark.

Southwestern airports are busy performing weekly maintenance checks to ensure the aircrafts are ready to fly when the time comes. (Stephanie Bennett/Fox News)

Unlike cars, airplanes need a lot of attention. They're supposed to keep flying with little rest between stops. These Southwestern airports are busy performing weekly maintenance checks to ensure they’re ready to fly when the time comes.

“We received 250 planes and it takes 250 hours per plane to get it inducted into storage that’s a lot of man-hours that has to be accomplished and then you have 7-day checks, 14-day checks, 30-day checks so they have to touch that one plane a lot of times," Mark Bleth, deputy director at Roswell International Air Center, said. "So we have a large opportunity with services that a lot of places don’t have so we are growing jobs at the air center."

The increase in business means these airports have been able to hire more staff to service planes. They’re also bringing in a stable revenue by charging a daily parking fee.

“For our airport, this is a revenue generator, so what may be a positive for us, you know is a negative for the aviation industry as a whole, this is the most devastating thing that’s ever happened to the airline industries,” said Miller.

The San Bernardino International Airport in California is also parking planes. They said they’ve mainly taken in Delta aircrafts from all around the country, including Boston, New York, Atlanta, Minneapolis, Detroit and Seattle, among other cities.

For now, all the airports are doing all they can to help. Some are even hoping to expand so they can house more planes.

“All the airlines are scrambling for space and we are happy to accommodate them in their time of need, no one wants to see this thing happening to the industry. It really is a crisis in aviation,” said Mark Gibbs, the director of aviation at San Bernardino International Airport.