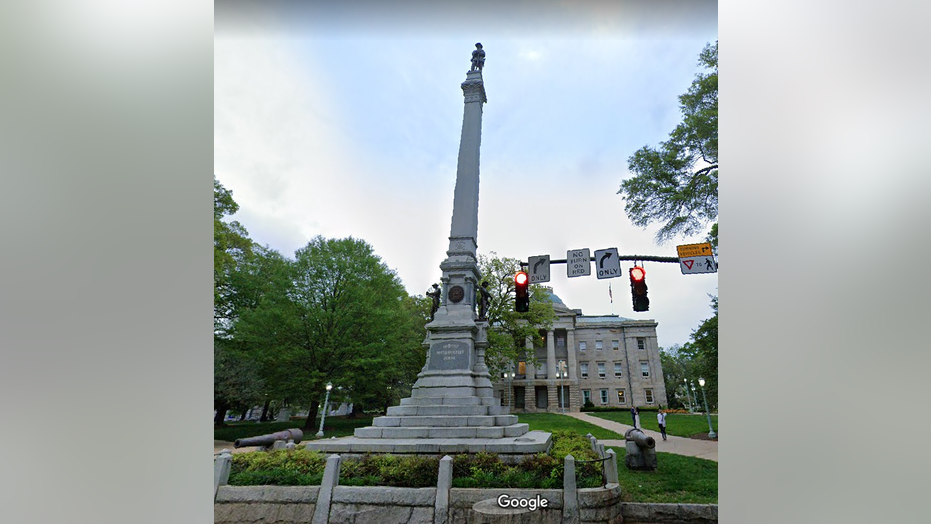 A granite pillar that held the statue of a Confederate soldier at the North Carolina Statehouse grounds for 125 years, came down Tuesday night after three days of failed attempts.

The removal of the column -- estimated to weigh 8,500 pounds -- required the use of a crane that eventually lifted it away around 11:30 p.m., The News & Observer of Raleigh reported.

”The people that are out there, the people who have been out here, even though we haven’t seen much movement since Sunday -- it’s kind of like you want to witness an old part of history,” North Carolina resident Kenny Lee told the newspaper. “And at the same time, you’re witnessing a new history.”

WWII MONUMENT IN CHARLOTTE DEFACED WITH HAMMER AND SICKLE

The Confederate Soldiers Monument had previously stood at a height of 75 feet and was dedicated in 1895 to honor fallen soldiers of the Civil War, according to the University of North Carolina at Chapel Hill Library. Its height was cut in half following the removal of the pillar.

The column held up a statue depicting a Confederate artillery soldier holding a gun. The statue was removed Sunday following North Carolina Gov. Roy Cooper’s order -- which also applied to two other nearby Confederate statues.

"Monuments to white supremacy don’t belong in places of allegiance, and it’s past time that these painful memorials be moved in a legal, safe way,” Cooper, a Democrat, said in a statement last week.

A 2015 law prohibited the removal of the statues without the approval of a state historical commission, but Cooper said he was acting under a public-safety exception.

Protesters had toppled two other Confederate statues Friday night. One was strung by the neck and hung from a light pole.

Crews had attempted to remove the heavy pillar on multiple occasions over the weekend, with a crane failing to remove it from the monument base on Sunday, the paper reported.

The Confederate Soldiers Monument had previously stood 75 feet tall and was dedicated in 1895 to honor fallen Confederate soldiers of the Civil War. (Google Maps)

The Confederate Soldiers Monument was once described as a memorial that “shall stand through all the ages to tell of the bravery of the Southern soldier.”

Confederate monuments have come under increased scrutiny in recent weeks following the death of George Floyd in police custody on May 25 in Minneapolis. Protesters have also at times targeted Founding Fathers who were slaveholders, including George Washington and Thomas Jefferson.