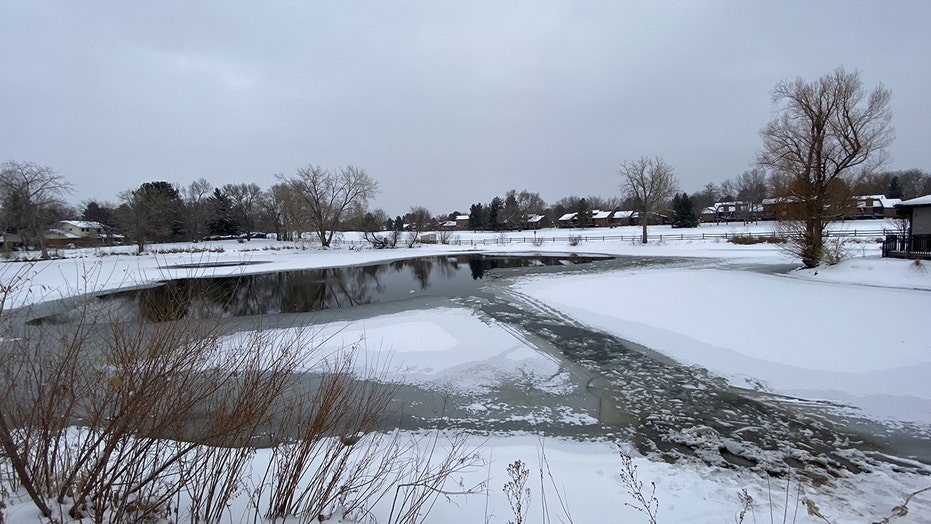 A kindergarten teacher in Colorado who fell through the ice on a pond with her dog over the weekend died of her injuries on Tuesday, according to officials.

The West Metro Fire Rescue said on Facebook a husband witnessed his wife and dog fall through the ice around 12:30 p.m. Sunday at a pond on the campus of Colorado Academy, a prep school in Denver.

"Within two minutes of arrival, firefighters had reached the woman, and were able to get her out of the water, despite the extremely thin, crumbling ice," rescue officials said. "They then rescued the dog."

The woman was rushed to an area hospital while the dog was transported to an emergency veterinarian, both with critical injuries

A kindergarten teacher in Colorado died Tuesday from complications after falling through the ice over the weekend. (West Metro Fire Rescue)

Webster was a kindergarten teacher at Colorado Academy who leaves behind a husband and two daughters.

In an email to families obtained by FOX31, the head of Colorado Academy said Webster "fought for her life through multiple surgeries over several days, but succumbed to the effects of being in the frigid water."

"We will remember her for her unfailing dedication to students, her incessant smile, and bright outlook," CA Head of School Mike Davis wrote. "In my mind, I can see her laughing and her head tossed back. She will be dearly missed at CA — by students, faculty, staff, parents and alumni."

CALIFORNIA WIND GUST OF 209 MPH ATOP MOUNTAIN WAS LIKELY MISTAKE DUE TO 'MULTIPLE ERRORS,' FORECASTERS SAY

Webster had been teaching kindergarten at the school since 2009.

A photo posted to Facebook on Wednesday by the school from family members showed the overwhelming support for the teacher.

"Our family appreciates the outpouring of love and support that has been shown to us during this time. We love the many cards, hand-drawn pictures, and letters made by the children for Leslie. Keep the love coming," read the note signed by ⁣Stephen, Maddie and Carolyn Webster.

Fire officials told FOX31 the dog did not survive either.

West Metro spokesperson Ronda Scholting said crews had some difficulty with the rescue due to water conditions. The ice is “relatively thin, about 2 inches thick but that ice was not solid. It was kind of slushy in some places and then more solid in others.”

In December, two dogs died in separate incidents after falling through ice on lakes in the Denver area, according to fire officials.