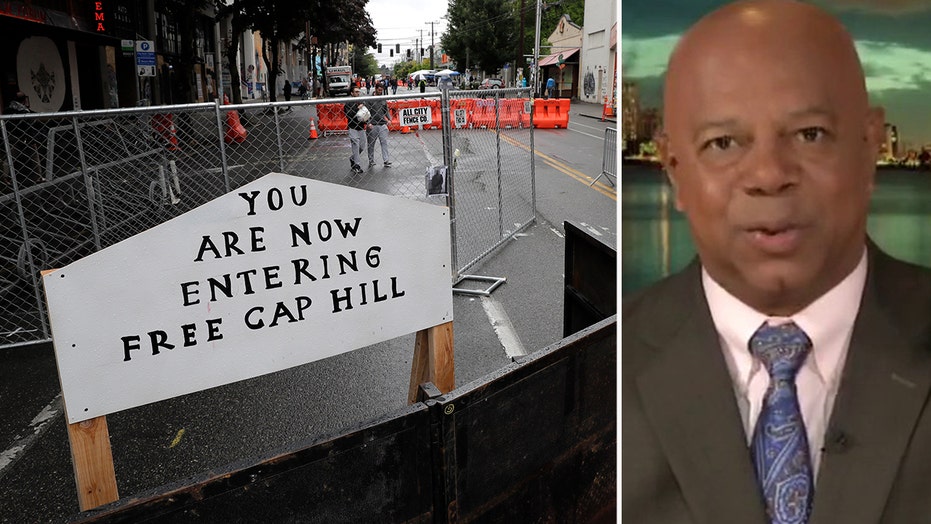 Editor’s Note: A FoxNews.com home page photo collage which originally accompanied this story included multiple scenes from Seattle’s “Capitol Hill Autonomous Zone” and of wreckage following recent riots. The collage did not clearly delineate between these images, and has since been replaced. In addition, a recent slideshow depicting scenes from Seattle mistakenly included a picture from St. Paul, Minnesota. Fox News regrets these errors.

Activists and police have clashing views regarding the activities going on inside the so-called "CHAZ," a six-block area of Seattle that has been taken over by protesters — and authorities are still scratching their heads as to who is actually running the rabble.

Photos of demonstrations inside the zone, which includes a now-shuttered police precinct, seem to paint a rosy picture: outdoor movies, music performances, sidewalk artwork and more.

"There's that stuff, but then there's the darker side of things too," one law enforcement official told Fox News.

One CHAZ supporter, identified as Armani on Twitter, encouraged protesters to "buy guns."

Police have repeatedly said they have "heard, anecdotally, reports of citizens and businesses being asked to pay a fee to operate within this area" while others have complained about armed guards asking to see identification for people to enter their homes, according to Assistant Chief of Police Deanna Nollette.

Police have also said their response time to 911 calls has tripled over the last few days because they are unable to access the downtown region and are being blocked out by protesters.

A volunteer works security at an entrance to the so-called "Capitol Hill Autonomous Zone" on June 10, 2020 in Seattle, Washington.  (Getty)

A possible leader behind the movement is Kshama Sawant, a Seattle City Council member who helped let hundreds of demonstrators into City Hall earlier this week in a late-night protest calling for Mayor Jenny Durkan to resign.

Sawant has encouraged protesters to hold out on giving back the precinct to police or allowing officers inside the barricaded region.

"The process for deciding East Precinct conversion must include those involved in CHAZ, black community organizations, restorative justice, faith, anti-racist, renter orgns, land trusts, groups, labor unions that have a proven record of fighting racism," Sawant wrote in a post on Twitter.

"Our movement needs to urgently ensure East Precinct is not handed back to police, but is turned over permanently into community control," she wrote.

Meanwhile, posts circulating on Twitter encourage those inside CHAZ to contact their friends and encourage them to fight back against police reclaiming their precinct.

"Yall better be hitting up every single one of your "f-----g" friends right now so they can witness this," one demonstrator said. "This is not what we fought for. They need to get out."

Businesses situated inside CHAZ, including dozens of restaurants and bars, have put out free food, medical supplies, masks and other necessities to help sustain protesters, according to reports by King 5.

The area has also started a garbage-collection program, according to reports by Insider.

Other local reports state that CHAZ has also started planting a garden.

One agitator group on Twitter posting photos claiming to be inside CHAZ showed a list of items needed by demonstrators including cigarettes, tents and bedding.

Despite President Trump vowing to straighten the situation out if the local government didn't take care of it, it would appear these protesters are preparing for an extended stay.