New details have emerged regarding the upcoming docuseries about Casey Anthony, the Florida woman acquitted in her 2-year-old daughter’s mysterious, unsolved murder.

"Casey Anthony: Where The Truth Lies," will be released later this month and features Anthony’s first on-camera interview since she was found not guilty of murdering her daughter, Caylee. In the three-part docuseries, the 36-year-old provided new details and pinned the blame on her father, much like defense attorneys did during her 2011 trial. People.com was first to report about Anthony’s statements.

"He handed her to me. Said it was my fault. That I caused it."

George Anthony did not immediately provide comment when contacted on Tuesday. He previously denied having any involvement in Caylee's death or the disposal of her remains.

According to the docuseries, Anthony said she and her daughter had been resting together in her bed on June 16, 2008, when the mother "wasn’t feeling that great." She said she thought she had locked the door.

CASEY ANTHONY MYSTERY: WHERE ARE THEY NOW?

"I was awoken by him (her father) shaking me and asking me where Caylee was," she said. "She would never even leave my room without telling me."

She went on, "I immediately started looking around the house. … I go outside, and I'm looking to see where she could be. She's not in her playhouse. Where is she?"

Asked if she had looked inside the pool, she said, "Didn't have to."

She then spotted her father "standing there with her."

CASEY ANTHONY WANTS TO ‘TELL HER TRUTH’ IN A DOCUMENTARY, PAL SAYS: ‘SHE FEELS LIKE IT’S TIME’

"She's soaking wet," she said. "He handed her to me and telling me that it was my fault. That I did that. That I caused it. But he didn't rush to call 911, or he wasn't trying to resuscitate her. I just collapsed with her in my arms."

George Anthony then changed his demeanor and took Caylee from his daughter, Casey Anthony said.

"He immediately softens his tone and tells me, ‘It’s going to be OK,’" she said. "That's what he said to me. I wanted to believe him. … He took her from me, and he walked away."

She said she did not believe her daughter had drowned and added that the above-ground pool had "no ladder" and there was "no way for her to shimmy up." 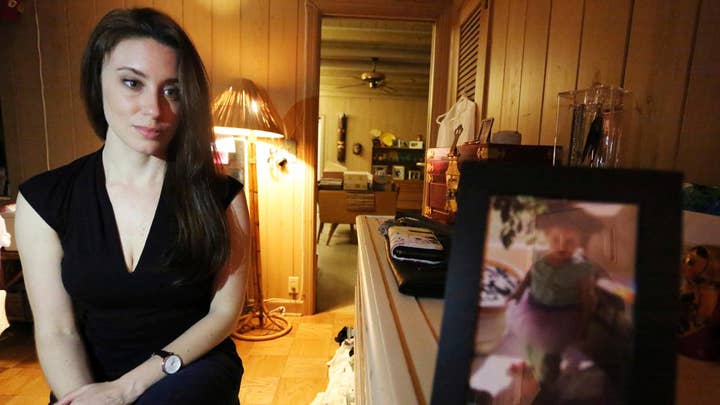 She added, "There's no way to explain that, unless [George] put her in the pool to cover up what he did."

Casey Anthony then left and spent the next 31 days with her boyfriend but kept quiet about what she had seen. She claimed that she "genuinely believed that Caylee was still alive." "My father kept telling me she was OK," she said in the show. "I was in contact with my father daily. … I just wanted answers. ‘When am I going to see her? How much longer are we going to keep doing this? Is she OK?’"

CASEY ANTHONY ACQUITTAL: JUROR SPEAKS OUT 10 YEARS AFTER TRIAL, SAYS CASE 'HAUNTS ME TO THIS DAY'

Caylee’s grandmother reported her missing on July 15, 2008, weeks after she was said to have been last seen on June 16. Anthony said her daughter was with a babysitter when they disappeared.

George and Cindy Anthony in their seats after placing a teddy bear at the memorial for their granddaughter, Caylee Anthony, at First Baptist Orlando in Orlando, Florida. (MyFOXOrlando.com)

Casey Anthony was initially arrested for child neglect but was later charged with more serious counts, including first-degree murder, after Caylee's remains were discovered on Dec. 11.

After months of speculation surrounding the case and a trial that lasted more than a month, a jury deliberated for 11 hours before finding Anthony not guilty of first-degree murder, aggravated manslaughter and aggravated child abuse. She was convicted of lying to law enforcement.

Casey Anthony returns to spotlight in docuseries on her daughter's murder. (Fox News)

Anthony’s defense attorney, Jose Baez, argued that Caylee accidentally drowned and her death was then covered up. Prosecutors argued that Casey Anthony suffocated the girl using chloroform and then covered the toddler's mouth with duct tape.

Caylee's disappearance and death, and the criminal investigation and trial that followed, gripped the nation for years and captured headlines for days at a time.

"Casey Anthony: Where The Truth Lies," will air on Peacock on Nov. 29.