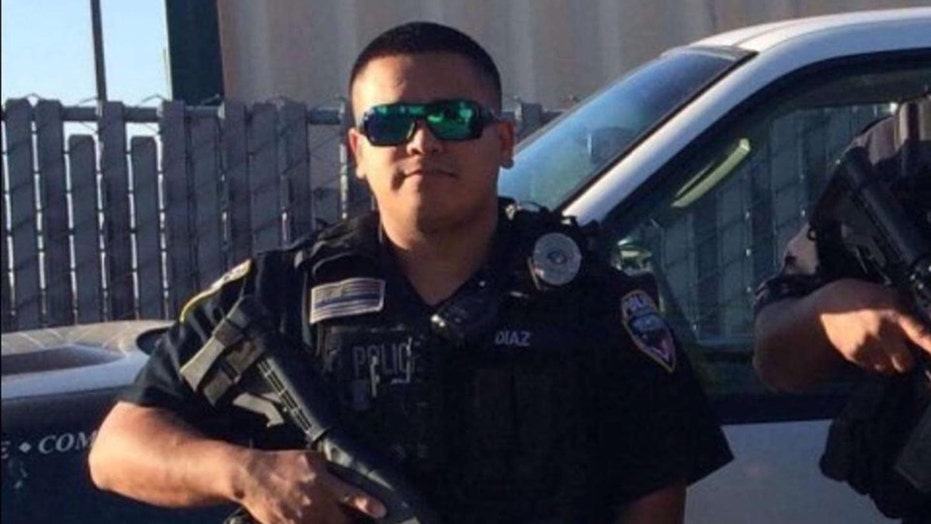 A family birthday party in California over the weekend turned tragic when an off-duty welfare fraud investigator killed a police officer, critically wounded his own father and then killed himself — a bloody spree reportedly stemming from a fight between the assailant and his girlfriend, according to officials.

The Kings County Sheriff's Office said the incident happened around 9 p.m. Saturday at a home in Hanford, located about 33 miles south of Fresno, after 32-year-old Ramiro Trevino Jr. got into a violent argument with his girlfriend.

Trevino Jr.'s friend, Lemoore Police Officer Jonathan Diaz, 31, and Trevino Jr.'s father, Ramiro Trevino Sr., 58, reportedly intervened in the fight and attempted to get the woman to safety out of the home.

"It appeared the two victims were really trying to stop what was occurring," Kings County Sheriff Dave Robinson said at a news conference.

"They definitely put their lives on the line to try to defuse the situation," Robinson said.

Lemoore Police Officer Jonathan Diaz was killed by his friend after intervening in a fight at a family birthday party over the weekend, according to officials. (Huron Police Department)

"I heard three shots, but I didn't know they were shots at the time," he said.

After shooting his friend and father, officials say Trevino Jr. then fatally shot himself.

"I stepped outside, I looked and that's when I saw a body on the floor, and I was like, 'What just happened?'" Arevalo told KFSN-TV.

Diaz died at the scene, while the elder Trevino had to be rushed from his own birthday party to an area hospital, where he was listed in critical condition, FOX26 reported.

Lemoore Police Officer Jonathan Diaz tried to break up a fight between his friend and friend's girlfriend at a birthday party over the weekend and was fatally shot, according to officials. (Huron Police Department)

Diaz, who leaves behind two children, was honored as Lemoore's public safety award recipient of the year, according to KFSN.

He was previously with the Huron Police Department, which posted a tribute to the fallen officer.