A reputed gang member and convicted murderer who got out of prison decades early with help from Los Angeles District Attorney George Gascon is facing new felony charges, according to authorities.

Andrew Cachu was released in November after Deputy District Attorney Alisa Blair, a close Gascon ally, declined to present evidence at a hearing to determine whether he should remain in custody after aging out of the juvenile detention facility when he turned 25, Fox News Digital reported at the time.

The Los Angeles Sheriff’s Department said Cachu had been involved in a chase Wednesday evening.

Lt. L. Arnold told Fox News Digital that deputies responded to a report of a person passed out in a car blocking driving lanes when they encountered Cachu apparently asleep with a gun in the car.

"He came to and a pursuit happened, a vehicle pursuit," Arnold said. "He crashed the car, foot pursuit, deputies detained him."

During the chase, Cachu allegedly ditched the firearm, which deputies said they recovered.

He faces 11 charges total, including evading arrest, unlawful possession of a firearm, and driving under the influence.

Andrew Cachu, who was convicted of shooting a man in the back as gang members held him down, was allegedly asleep with his gun in a car blocking traffic Wednesday night, according to authorities. (Los Angeles County Sheriff's Department)

"He was obviously under the influence," Arnold said, adding that police found "many drugs" in the vehicle.

Cachu was 17 in March 2015 when he gunned down Louis Amela, 41, outside the Sky Burger restaurant in Palmdale during a robbery, according to court documents.

"He never should have been out on the streets," Kathy Cady, a California attorney representing Amela's family, told Fox News Digital Thursday. "The only reason he was out on the streets is because of Gascon's policies and his handpicked surrogate, Alisa Blair, refused to put up any evidence…at the hearing."

Cachu shot Amela in the back as the man struggled with a group of assailants trying to steal his bicycle in a gang-motivated robbery, according to court documents. The victim’s girlfriend told investigators that two males, also believed to be gang members, held Amela down as Cachu fired two shots.

Cachu was tried prior to Gascon’s election, and although he was juvenile at the time of the crime, was prosecuted and convicted as an adult, court documents show.

"We are disappointed to learn that Mr. Cachu has not availed himself of the support that he so clearly needs, grateful that no physical harm came to anyone, and are committed to holding him accountable as an adult in this case," Gascon said in a statement Thursday.

He went on to defend his office's handling of Cachu's November release.

"As California law requires, our office reviewed Mr. Cachu's original case, where he had been sentenced as an adult despite committing the crime as a minor," he said. "Based upon the facts of the case and the individual characteristics of Mr. Cachu we determined that we would not likely prevail in a transfer hearing because we could not prove that he would not have benefited from juvenile resources at the time of the original offense – again, as the law requires."

Cady said the statement was "riddled with falsehoods." 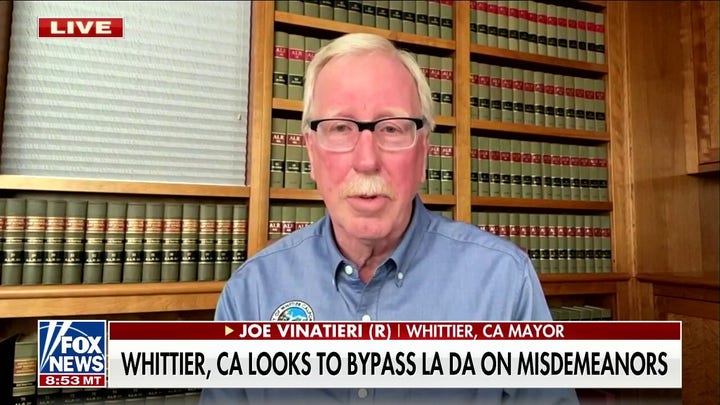 "He is badly mistaken, or being misled, or ignorant, I don’t know which of those it is," she said. "But he's just plain wrong. What he claims is ridiculous. And when you have people who have done very, very dangerous things that have negatively impacted the community, they should not be released after short prison sentences."

As Cachu neared release just six years of a 50-year sentence, FOX Los Angeles obtained jailhouse recordings between the killer and his mother, who appeared to sound "overjoyed" about Blair's involvement in the case in the leadup to his release.

"The Cachu case is one of way too many that shows the nation that George Gascon’s policies, directives and so-called reforms are a failure," said Jonathan Hatami, a deputy Los Angeles district attorney who has endorsed the recall effort aiming to remove Gascon from office. "His ‘data and science’ was flawed and completely untrue and his 18-month social experiment has been an abysmal failure."

Cachu’s new arrest is the most recent incident attributed to Gascon’s left-wing policy directives. He is also taking a court battle against his own deputies to the California Supreme Court, disbanded a division in his office tasked with notifying victims of their assailants’ parole hearings and has been sharply criticized for the short sentences imposed on offenders accused of serious crimes.

"We in Los Angeles are less safe and many innocent Angelenos have suffered," Hatami added. "Even the juvenile offenders aren’t being helped and rehabilitated. George just doesn’t care about public safety, families, or innocent children and he should be removed as soon as possible."