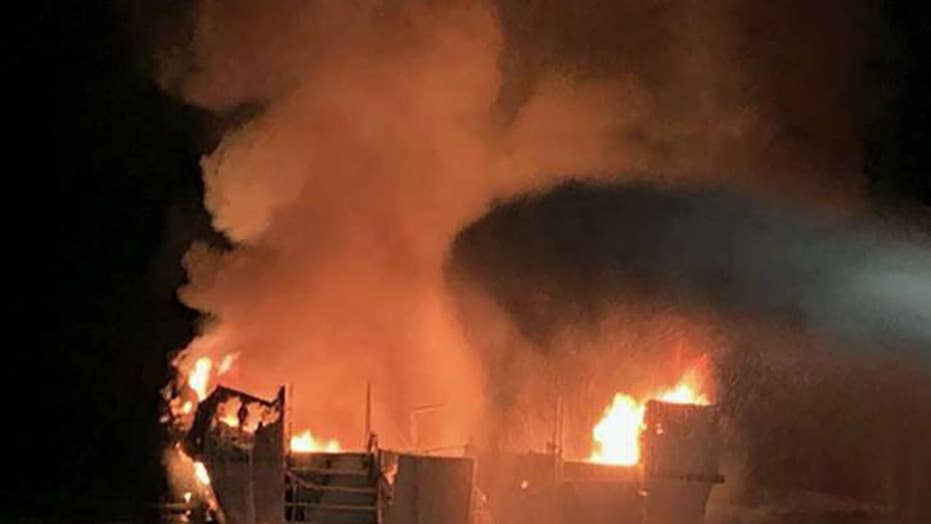 The diving boat that caught fire on Labor Day off southern California, killing 34 people, was among hundreds of small vessels exempted by the U.S. Coast Guard from stricter safety rules designed to make it easier for passengers to escape, according to a newspaper report Monday.

In 1996, the Coast Guard implemented a set of standards on new vessels, requiring escape hatches at least 32 inches wide and illuminated exit signs. The Conception, built in 1981, had a 24-inch hatch and no illuminated signs. The diving boat was one of 325 vessels built before 1996 that were grandfathered in, and therefore, not required to meet new regulations because doing so was found to be economically unfeasible and impractical, according to the Los Angeles Times.

All 33 passengers and one crew member aboard the Conception were trapped below deck where they had been sleeping in stacked bunk beds when the fire first broke out in the early morning hours of Sept. 2. Crew members who jumped overboard to safety said they had been unable to reach passengers trapped in the hull below because of intense flames. The 75-foot long dive boat sank off the coast of Santa Cruz Island, Calif.

It’s unclear whether such measures would have made a difference in what’s since been deemed the worst maritime disaster in modern California history, according to the newspaper. Authorities have not determined the cause of the fire. Criminal and safety investigations are ongoing.

National Transportation Safety Board investigator Jennifer Homendy told the Times in September that she was “taken aback” by the small size of the emergency escape hatches, adding that she thought it would be difficult for passengers to exit during an emergency in the dark.

The Coast Guard has said the Conception, owned by Truth Aquatics, which operates diving excursions around the Channel Islands, had passed all recent inspections before the fire.

“We have always followed Coast Guard regulations and whatever is required,” Truth Aquatics owner Glen Fritzler told the Times. “Our past inspections reflect our commitment.”

Under added scrutiny since the Conception disaster, the Coast Guard has stepped up inspections of similar boats across the country. Several boat owners have said that among the issues inspectors have raised is the size of escape hatches, fire protection systems and crew training in emergencies.

When adopting changes to the Subchapter T regulations in the 1990s, the Coast Guard wanted to ensure improvements and safety for new boats, but also had to address what to do with existing vessels, according to Kyle McAvoy, a marine safety expert at Robson Forensic and former Coast Guard chief of the Office of Commercial Vessel Compliance Policy.

Before the new standards were adopted, the Coast Guard sought public comment and conducted feasibility studies. Older vessels “may not be able to change what they have,” McAvoy told the newspaper. He retired as a Coast Guard captain in 2016.

The Coast Guard has the authority to make immediate safety changes in the wake of incidents such as the deadly Conception fire, McAvoy added.

Currently, the Subchapter T regulations govern about 5,000 vessels on U.S. waterways. Of those, about 325 still fall under the original rules, according to the Times. Small passenger vessels weighing less than 100 tons fall under Subchapter T of the Code of Federal Regulations for boats.