Howard G. Buffet picured in Illinois, interviewing five people in a broken-down vehicle, one of whom reportedly confessed to entering the U.S. illegally twice. (Chad Larner via 50borderstates.com )

Howard Buffett, Warren’s oldest son, has become a crusader at the border, using his organizations and wealth to boost security efforts of local authorities and volunteer groups, according to a recent report.

While his interest in border security may seem odd, a closer look at the 64-year-old billionaire and philanthropist reveals he’s no stranger to the issue. Buffett owns a ranch in Cochise County, Arizona, that sits just 300 yards from the U.S.-Mexico border.

In addition, a report by The Phoenix New Times indicated a close relationship between Buffett and law enforcement, with the former reportedly gifting $30 million to date to the Cochise County Sheriff’s Office and similar groups.

Trump on building border wall: If no deal with Congress, I can't imagine why I wouldn't declare a national emergency

According to the report, much of that money has been used to jump-start an investigative unit into human and drug smuggling, renovate one jail, build law enforcement training facilities, including a shooting range, arm officers, purchase surveillance equipment and even provide the sheriff’s office with at least three helicopters.

In 2013 Buffett was awarded the title of “special deputy” after giving the sheriff’s office nearly $1 million in gifts, the paper said. He also reportedly became an active member of the Cochise County Sheriff’s Assist Team (SAT), a private volunteer group that is said to provide security and intelligence.

It was not clear what role Buffett has in the organization, but he soon became the main source of funding for it, according to the report.

While SAT members are said to have no law enforcement authority, The Phoenix New Times reported that the organization was given guns, armor and vehicles purchased by the sheriff’s office using money from Buffett for patrolling purposes.

The Cochise County Sheriff’s Office did not reply to Fox News’ request for comment but a public information officer told the paper that while the weapons were purchased for SAT, no member was ever issued a firearm because they all failed to meet certain qualifications.

The spokesperson also stated that Buffett has no legal authority in Cochise County, despite being named as “Ranch Patrol Liaison Officer [...] with the rank of Deputy Commander” in 2016.

TRUMP VISITS TEXAS BORDER TOWN AMID PUSH FOR WALL: WHAT TO KNOW ABOUT MCALLEN

Records obtained by the paper show that Buffett has been involved in patrols and even conducted traffic stops.

Buffett has donated throughout the years to Cochise County Sheriff’s Office and similar groups through his foundation. 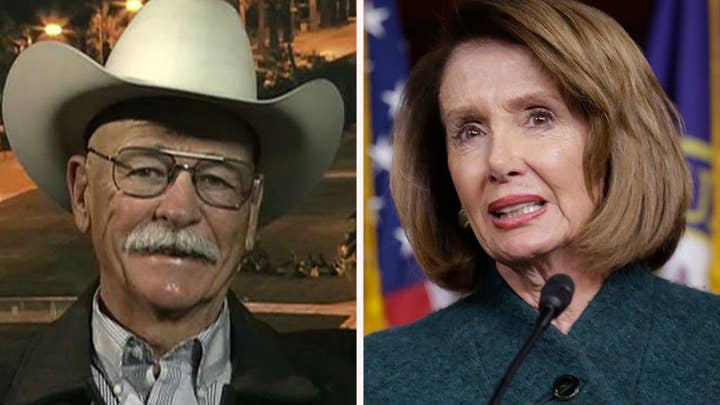 The Howard G. Buffett Foundation in Decatur, Illinois, has gifted funds not only to local authorities in Arizona, but also the Macon County Sheriff’s Office, where he was also named “Civilian Undersheriff" in 2014, and helped to fund another law enforcement training facility in Macon County, according to the report.

The Phoenix New Times obtained emails from the Decatur Police Department that showed that Buffett had taken two members of local law enforcement down to the border with him sometime in early 2016. Those emails reportedly contained surveillance images of what looked to be smugglers crossing Buffett’s ranch.

Howard Buffett speaking to a rancher whose property sits alongside border fencing in Arizona. (Eric Crowley via 50borderstates.com)

The Howard G. Buffett Foundation did not reply to Fox News’ request for comment.

Buffett published a book in April 2018, titled "Our 50-State Border Crisis: How the Mexican Border Fuels the Drug Epidemic Across America,” suggesting his own idea of what needs to be done at the border to boost security.

He believes that the best solution is a combination of properly equipped law enforcement, some barriers in places and cooperation with Mexico and other countries.