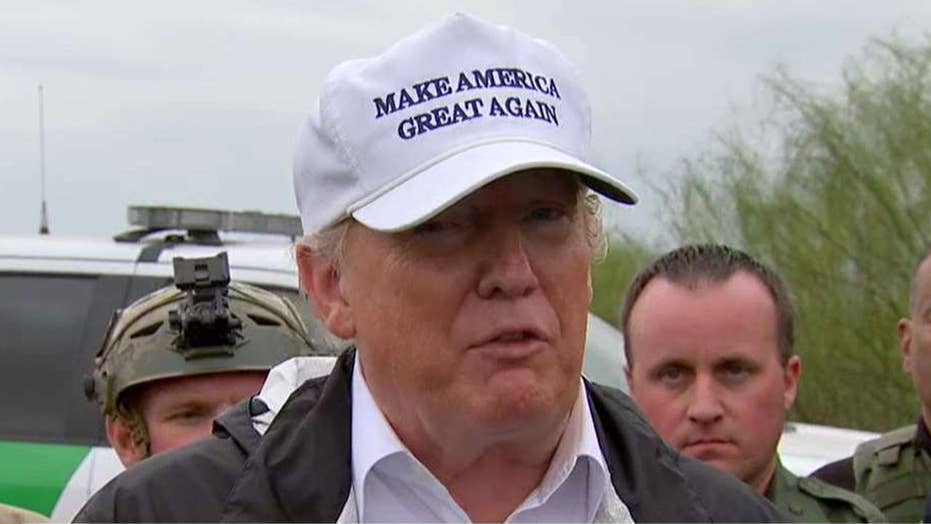 Trump on building border wall: If no deal with Congress, I can't imagine why I wouldn't declare a national emergency

President Donald Trump told Fox News on Thursday that he has "the absolute right to declare a national emergency" if he can't reach an agreement with congressional Democrats to provide funding for his promised wall along the U.S.-Mexico border.

LINDSEY GRAHAM: IT'S TIME FOR TRUMP 'TO USE EMERGENCY POWERS TO FUND' BORDER WALL

Trump did not lay out a specific timetable for when he might take such a step, saying: "I think we're going to see what happens over the next few days." However, he appeared to hold out hope for making a deal to secure wall funding and fully reopen the government.

"We should be able to make a deal with Congress," the president said. "If you look, Democrats, in Congress, especially the new ones coming in, are starting to say, ‘Wait a minute, we can’t win this battle with Trump, because of the fact that it’s just common sense. How can we say that a wall doesn’t work?’"

The president spoke to Fox News on the banks of the Rio Grande, where he traveled to argue his claim that a barrier would deter drug and human trafficking into the United States.

"Death is pouring through," Trump said. "We have crime and death and it's not just at the border. They get through the border and they go and filter into the country and you have MS-13 gangs in places like Los Angeles and you have gangs all over Long Island, which we're knocking the hell out of. There should be no reason for us to have to do this. They shouldn't be allowed in and if we had the barrier, they wouldn't be allowed in."

The president said a wall would be "virtually a hundred percent effective and [House Speaker] Nancy [Pelosi] and [Senate Democratic Leader] Chuck [Schumer] know that, but it's politics. It's about the 2020 campaign, it's about running for president. That's what they're doing. They're already doing it. It's a shame. They've got to put the country first."

Democrats repeatedly have refused to approve any legislation to fund the wall. The standoff led to the partial government shutdown, which is set to his the three-week mark Friday.

"Everyone wants us to win this battle," Trump said. "It's common sense ... Look, we’re not going anywhere. We’re not changing our mind because there’s nothing to change your mind about. The wall works [and] if we don't have a steel or concrete barrier, we're all wasting a lot of time."